Top Me Off Doubles In Weiss

The impressive Top Me Off is now two-for-two in the Bobby Weiss Trotting Series for sophomore trotting males after winning in 1:57.1 over a “good” track Sunday at The Downs at Mohegan Sun Pocono, with Hoolie N Hector joining him with two Weiss wins after a 1:57.4 clocking in his division, all four of which carried a purse of $17,500.

The Bar Hopping ridgling Top Me Off showed his maneuverability in this week’s Weiss event. After racing on the front in his previous two 2021 starts, trainer-driver Todd Schadel raced him in the pocket behind his fair circuit foe of last year, Killer Instinct. Come the stretch, though, Schadel right-lined his three-year-old, and he went right on by for his ninth win in 19 starts. Todd’s wife Christine owns the swift youngster along with Rick and Regina Beinhauer.

The Muscles Yankee gelding Hoolie N Hector was let go at 19-1 when he won last week, but this time the crowd sent him as the favourite. And the trotter rewarded their insight, sweeping wide on the final turn for Anthony Napolitano to win going away over the off going for trainer Andrew Adamczyk and owner Joseph Meaney. 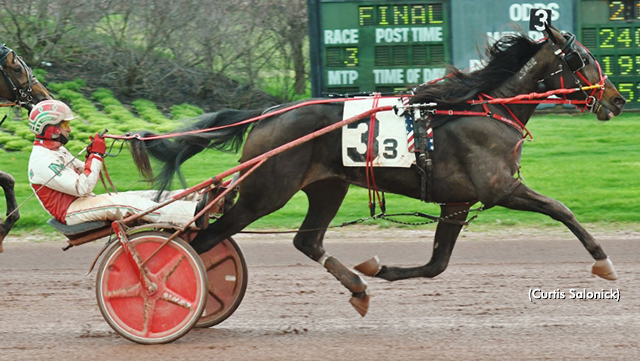 The fastest Weiss winner on the card was the Credit Winner gelding Credit Con. Tyler Buter coaxed enough out of the 11-1 shot to record the win and mark for trainer Todd Buter and owner Lee Sitto.

Ceffyl Dwr got a big second-quarter breather on the lead, and then scooted home in successive quarters of :29 to win his Weiss section in 1:57.1. Named after a “water horse” in Welsh folklore, Ceffyl Dwr may have had an advantage over the wet going as he posted a lifetime best for driver Jackie Ingrassia and trainer, her husband, Frank Ingrassia. Jackie also shares in the ownership with Donna Franchetti and Thomas Doran.

George Napolitano Jr. followed a five-bagger on the Saturday card with four more victories on Sunday.

Weiss Series competition carries on during the Monday afternoon (April 12) card at Pocono, with three sections carded for the second prelim for pacing fillies, and the middle contest matching first-week winners So Irresistible and Milieu Hanover is perhaps the most competitive. First-race post time for the Monday card at the Downs is 12:30 p.m. Program pages will be available at the PHHA website.