The annual Teddy Roosevelt-A-Thon was open to three- and four-year-old pacers (guys only, girls went at in the Petticoat) who were non-winners of four races or $40,000 through last December 1.

Leaving from post position two, Never Say Never N tracked pole-sitting Prejudice (Jordan Stratton) from the outset. Meanwhile, Awesomeness tried to leave, but was wrangled back into a four-hole.

Those three were the only ones in the final who had each won both of their series starts (one scheduled leg was snowed out).

Prejudice owned a 1-1/2 length lead into the lane, but was surrounded. Awesomeness was resilient, but Never Say Never N had the shorter route and the bigger envelope. The latter whipped the former by a head in 1:54.2. 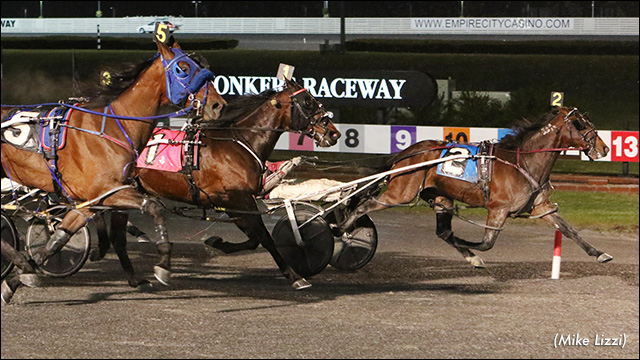 “He’s quick and fits this track very well,” Bartlett said. “Ever since I qualified him, I’ve been impressed with him. I knew Jordan’s horse (Prejudice) would take me to the lane, and it was up to him from there.

For second choice Never Say Never N, a four-year-old Down Under son of Bettors Delight co-owned by Gerard Stuchbury and Thomas Lazzaro and trained by Heidi Rohr, he’s now 5-for-5 this season. The exacta paid $20.20, with the triple returning $30.80.

“His best stride has always been near the wire, but sometimes he shuts himself off, so they added a mini bit tonight and it helped.”

As for Awesomeness, whose own win streak ended at six, “We lost a lot of ground in the last turn and Jason (Never Say Never N) was able to get the jump,” Zeron said. “(Awesomeness) was out two turns and really running in, so I can’t fault the effort.”