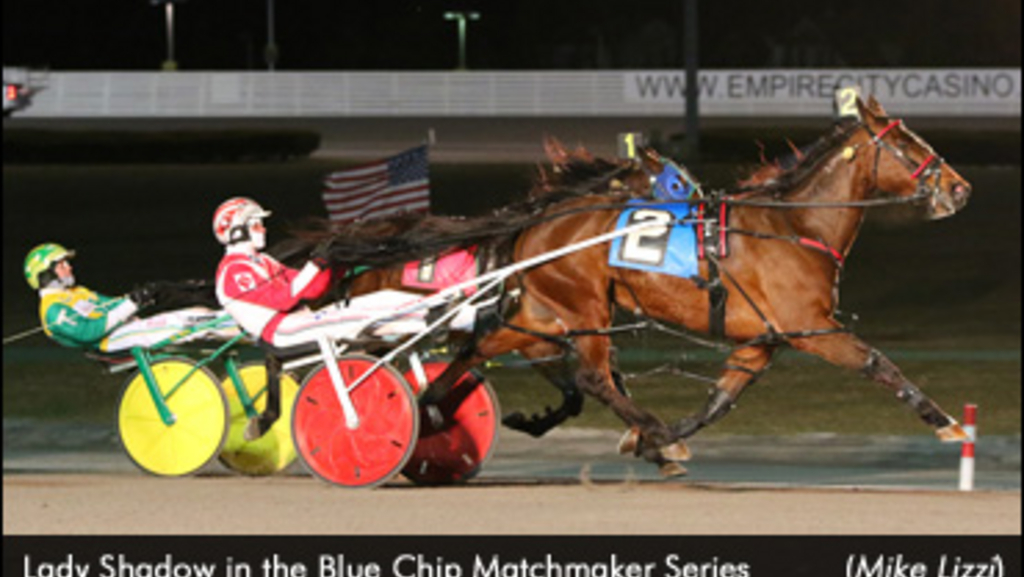 A consecutively-contested quartet of $40,000 events for high-end pacing mares opened the show.

The first division fooled very few in the equine persona of Shartin N (Tim Tetrick, $2.50). Away fourth from the pole, she took over from Gina Grace N (Larry Stalbaum) after that eight-holer made front (:27.1, :57.3).

Shartin N blew right by, opening nighttime daylight before a 1:25.3 three-quarters. The lead was three lengths off the final turn and four and one-quarter lengths at the wire, which she reached in 1:54.2.

“I think so,” Tetrick said.

For Shartin N, a five-year-old Down Under daughter of Tintin In America co-owned by Richard Poillucci and Jo Anne Looney-King and trained by Jim King Jr., the win was her fifth in six seasonal starts. The exacta paid $39.20, with triple returning $261.

Pole-sitting Sell A Bit N took over from Medusa (Scott Zeron), then whipped that one by a half-length. Third went to Dudesalady (Brent Holland) after trying it first-up, with Annabeth (Mark MacDonald) fourth.

For Sell A Bit N, a five-year-old Down Under daughter of Julius Caesar owned by Von Knoblauch Stables and trained by Peter Tritton, the win was her fourth in seven ’18 tries. The exacta paid $6, the triple (three wagering choices in order) returned $15 and the superfecta paid $56.50.

“(Sell A Bit N) had three weeks off, so she wasn’t 100 per cent, but she refused to let anyone pass her,” Stratton said.

The short-priced procession continued in Friday evening’s third series event. Three-time O'Brien Award winner Lady Shadow (Jason Bartlett, $2.90) had things her own way. From post position No. 2, she saw Call Me Queen Be (Zeron) make the first lead. Lady Shadow gained the advantage before a :27.3 opening quarter, then rated a :57.2 intermission.

Safe From Terror (Yannick Gingras) found an eight-hole seat, only to take out of fourth. That turned out to be an ill-advised move, as she backpedaled toward a 1:26 three-quarters. Lady Shadow owned a length and a half lead into the lane, before winning by a half-length in 1:54.3.

Scandalicious (Tetrick) and Eclipse Me N (Dan Dube) rallied for second and third, respectively. Meanwhile, Call Me Queen Be edged from the pocket, but faded to fourth.

For season-debuting Lady Shadow, a seven-year-old daughter of Shadow Play co-owned by trainer Richard Banca, D’Elegance Stable IX and Thomas Lazzaro, the win was her 34th lifetime. The exacta paid $9.40, with the triple returning $82.

"It’s the best she’s raced since she’s been in the barn,” Bartlett said of the double millionairess.

The first round’s final foray had the only non-favoured winner, as pocketed third choice Twinkle (Eric Goodell, $8.10) was quite handy.

From post No. 2, Twinkle nestled in behind Lispatty (George Brennan) with substations of :27.4, :57.2 and 1:25.3. Pulling early, Twinkle went right by, winning by a length and a quarter in 1:54.2. Dewar N Soda (Bartlett) wound up a three-hole second, with Lispatty third and Vintage Babe (Holland) fourth.

Last season’s series champ and this race’s 17-10 fave, Mackenzie A (Stratton), never did get involved and finishing eighth (last).

For season-debuting Twinkle, a five-year-old daughter of Bettors Delight co-owned by Dana Parham & Let it Ride Stables and trained by Ross Croghan, she’s now won 12-of-13 career starts. The exacta paid $105, the triple returned $338.50 and the superfecta paid $1,570.

Saturday night (March 17) offers a quintet of $50,000 divisions of Free-for-Allers in the opening round of the George Morton Levy Memorial Pacing Series.