Sooo Handsome, bred, owned, trained and driven by Rick Plano, pulled off a minor upset in the $12,000 Open 1 Handicap Trot at Pompano Park on Tuesday night (March 14), squeaking by the favoured Prairie Fortune, with John MacDonald in the bike, in the final stride for a nose victory in 1:55.3.

The four-year-old gelded son of Cash Hall, second to Prairie Fortune one week ago, turned the tables on that 1-2 favourite by gaining a good early spot, taking up the chase on the backside and wearing Prairie Fortune down in the very last stride.

Massive Lightning, driven by Mickey McNichol, rallied to finish third, though two and three-quarter lengths away, with Explosive Muscles, last halfway through the mile, fourth. Massacaia was fifth in the septet of classy trotters.

As the outset, it was Celebrity Maserati leaving with alacrity with Sooo Handsome, leaving from the coveted post five, away well to settle in the garden spot. Diamond Dagger, the only mare in the field, was on the prowl from third with Massacaia next, Massive Lightning fifth, Explosive Muscles sixth and Prairie Fortune, handicapped with the outside post, trailing.

With an opening quarter in :27.2, Celebrity Maserati was gliding along on the lead with Sooo Handsome still second and Massacaia next as Diamond Dagger was now fourth and hung out to dry like wet laundry.

At the :56.2 half, Prairie Fortune was on the move from the back of the pack and, once they straightened away for the journey up the backside, MacDonald sent Prairie Jaguar on a double-bubble binge that took him to the front past the third station in 1:25.3.

Meanwhile, Sooo Handsome was able to wend his way to the outside but was still two lengths away turning for home.

In the lane, Prairie Fortune was trying desperately to protect the lead with Sooo Handsome gnawing away with every stride, finally claiming the top prize in the very last stride. 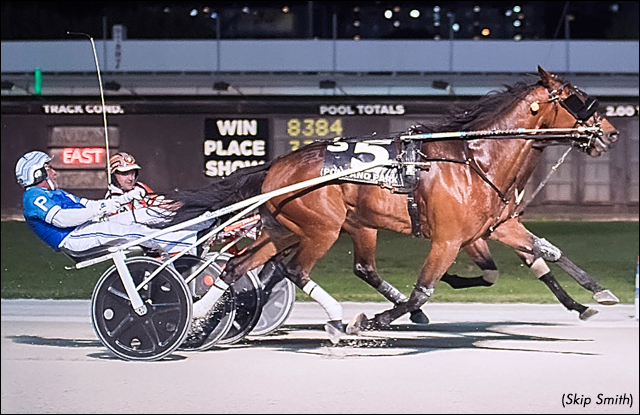 After the race, Plano said, “This horse tends to be a little lazy leaving but, with the five post here winning at such a high rate (24.6 per cent), and everyone else leaving from that post, I thought I’d try and leave a little, too.

“I wasn’t going to get by the ‘2’ horse (Celebrity Maserati), so it was kind of a blessing to settle into second. On the backstretch, John’s (MacDonald) horse (Prairie Fortune) was brushing very hard, so when he went by us, I was fortunate that I had a chance to pull and try and follow him.

“This horse (Sooo Handsome) can be very good when he’s in the mood and, tonight, he was in the mood!”

The four-year-old altered son of Swan For All scored a one-length victory over My Revenuer (Bryce Fenn) with Tater Twister (Mike Simons) third after cutting panels of :27.3, :57 and 1:26 for faltering ever-so-slightly in the final stages of the mile.

Modern Mercury, closing fastest of all, finished fourth after dawdling at the back of the back of the pack until the stretch call. Fleetwood Hall picked up the final award in the field of seven.

Swan Handicap, away in good order and settling in third as Tater Twister put up all the early numbers, pulled on the backside and went a game first-over journey, pulling on even terms with the leader once they straightened away for home and then on to victory -- his second of the year in 10 starts.

Racing continues on Wednesday night with Godiva Seelster looking for a repeat victory in the $11,000 Open Pace for mares. The seven-year-old daughter of Camluck, with 40 career victories in her grand career, will have Wally Hennessey in the bike and is listed as the 3-2 morning line favourite. Misssomebeach Blue, OK Heavenly, Goldstar Rockette, Jets Are On and Sweet Bet complete the talented field of ladies.