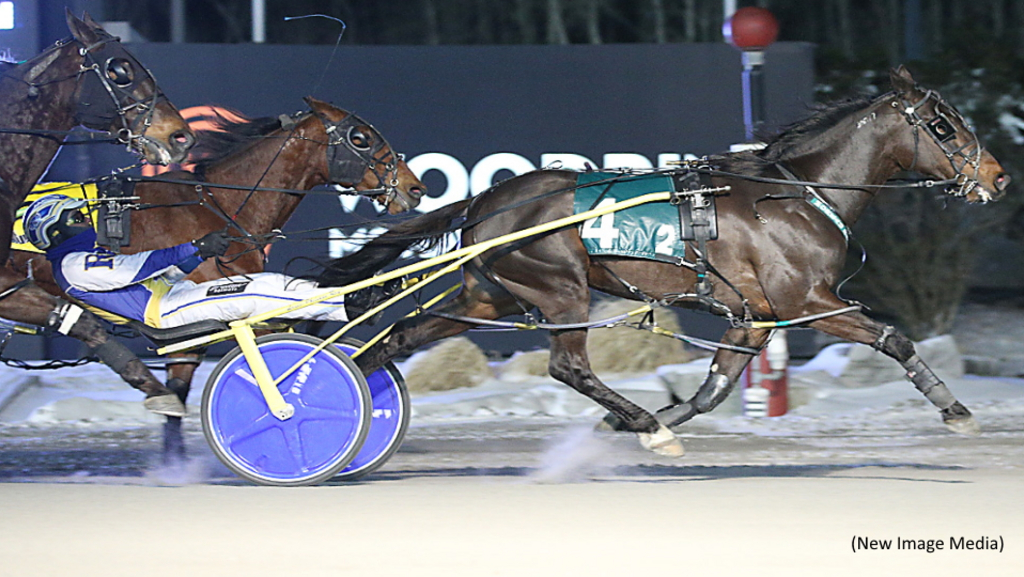 With breeding service in full swing for the season, Jimmy Freight is being collected for mares that come a courting and then still finding time to butt heads with some of the nation’s top older pacers.

Jimmy Freight was treated to a two-hole ride this evening behind Uhtred, who carved out panels of :28.3, :57.2 and 1:25.3 in the $36,000 affair. Louis-Philippe Roy angled the Richard Moreau trainee out of the pocket at the head of the lane and Jimmy Freight then summoned up :27.3 speed on the end of the mile to win by a length over Uhtred in 1:53.2. Race favourite Wheels On Fire rallied to grab third prize in the six-horse affair.

Adriano Sorella owns the seven-year-old son of Sportswriter-Allamerican Summer who is included in the stallion roster offered at Canada’s division of Winbak Farm. The victory improves his 2022 box score to 4-0-2 from nine attempts. The 25-time winner has banked over $1.5 million to date.

The winning streak is six-in-a-row and climbing for Linedrive Hanover thanks to his 1:53 triumph in a $22,000 conditioned event later on the card.

James MacDonald got away fourth from Post 7 with the Anthony Beaton trainee, who was sent off as the 2-5 choice in the 10-horse tilt. They were on the move to go after the leader in the backstretch, and after racing parked past the half in :57.2 he moved to the top and crossed over to the rail. He was prompted by Undrthsouthrnsun N to the three-quarter pole in 1:24.2 before turning that foe aside and using a :28.3 closing panel to win by three lengths over Undrthsouthrnsun N. Century Hannibal was third.

The four-year-old son of Betting Line-Lillian Hanover is owned by West Wins Stable, Mckinlay & Fielding and Mac Nichol. The talented pacer has banked over $70,000 in his first seven assignments.