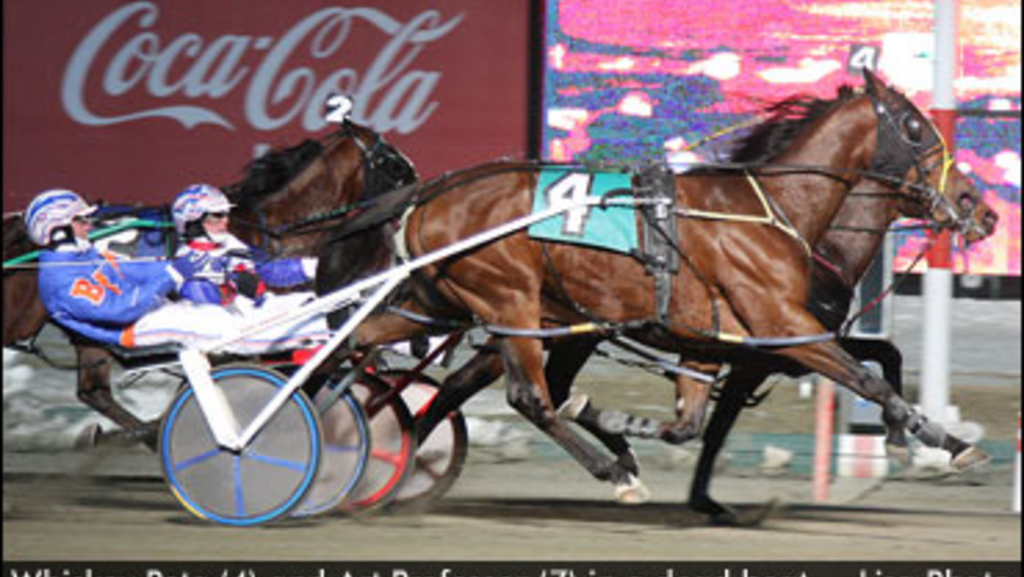 Whiskey Pete and Art Professor hit the line together in a dead heat in the first of two $40,000 Aquarius series divisions Saturday night at Meadowlands Racetrack

Whiskey Pete and driver Pat Berry fired to the front and were briefly headed by Art Professor and Ron Pierce before re-taking the lead mid-way down the backstretch in a :55.3 half. Whiskey Pete repelled a challenge by Windsong Gorgeous on the final turn and gamely matched strides with Art Professor in the sprint for home. The four-year-old sons of Art Major crossed the wire together in 1:51.1. Nat Varty trainee Whiskey Pete paid $4.20, while Art Professor, trained by Larry Remmen, returned $11.40.

Ted Gewertz's Whiskey Pete posted his second win in five starts this season and surpassed $200,000 in career earnings with the victory. Art Professor also scored his second victory in his fifth start of the season for the Ontario-based partnership of Bradley Grant and Holland Racing Stable.

Code Word ($11.40) romped to a three-length victory in the second of the two Aquarius splits. Driven by Yannick Gingras and trained by Ron Burke, Code Word picked up his first win of the season in a career best 1:51. Burke Racing Stable, Frank Baldachino and Weaver Bruscemi own the son of Western Terror.

The $78,000 Aquarius Final is one of three stakes to be contested next Saturday, February 19.