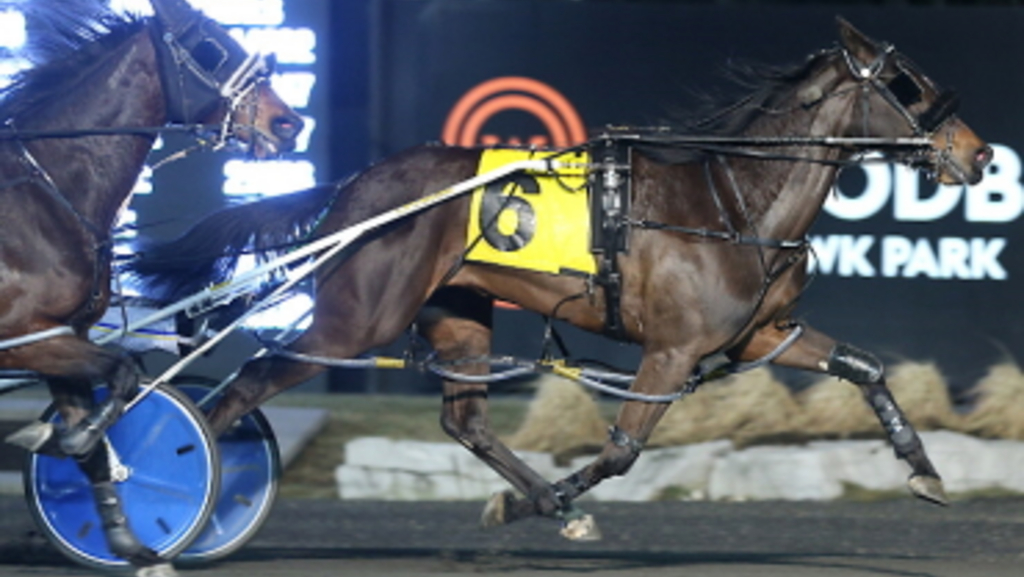 Seven divisions of the Pop Up Series went postward during Thursday’s second leg for trotters and pacing mares, with each division offering a purse of $17,000.

What A Rush kicked things off for the trotters with a come-from-behind score in 1:59.3 for driver Austin Sorrie and trainer Ron MacDonald.

The 10-year-old son of Federal Flex-Casual Breeze came on late to collar Holdin Aces in the eight-horse affair. Taking home the show dough in the opening tilt was Horse Trader.

The gelding won for the second time this season and for the 33rd time in his career. Brett MacDonald of Freelton, ON owns the career winner of $266,886.

Bastiano went to the front and didn’t look back in the second division for driver Jody Jamieson and trainer Don Lindsey.

Bernie Bahr of Georgetown, ON owns the seven-year-old son of Angus Hall-Victorine L A. He’s managed to assemble a 4-2-5 record from 18 trips to the track this season while boosting his overall cash stash to $168,058.

Ben Baillargeon trains the gelding for MT Stables Ontario Inc of Scarborough, ON. The victory was his fourth of the season and the seventh of his career. The $8,500 payday bumped his bankroll to $55,622.

Rowlen carved out all of the speed in the final division for the trotters en route to posting her first win of the season.

Scott Young marched the Roy Jeffries trainee to the lead from Post 5 and together they were on the hook for fractions of :28.2, :58.1 and 1:27.4. A :29.3 closing panel was enough to seal the deal for Rowlen who won by a length over Superlative in 1:57.2. Thee Desperado completed the top three finishers.

The five-year-old daughter of Johnny William-Amoreena won for the fourth time in her career for owner/breeder Deb Jeffries of Campbellville, ON. The mare has banked over $70,000 in her career.

Big Myrtle got the party started for the distaffers when she front-stepped to an impressive win for the tandem of driver James MacDonald and trainer Chantal Mitchell.

The four-year-old daughter of Big Jim-Myrtle Beach is owned by Mitchell and co-owner/breeder Doug Millard. The win improved her 2021 record to 3-0-1 from 16 starts while lifting her lifetime earnings over $80,000.

Heavily favoured Just My Shadow posted a second consecutive win in the series thanks to her off-the-pace tally in the second division for driver Trevor Henry and trainer Shayne Barrington.

The five-year-old daughter of Shadow Play-Just Say So charged off cover turning for home and kicked out a final quarter of :29.2 en route to posting the 1:57 decision. Shemars Lady Havoc was a head back in second, with third prize earned by Takeyourbreathaway.

Greystone Natali O doubled up in the series thanks to her 1:57 triumph in the final division for female pacers.

Doug McNair quarter pole-moved the Duane Marfisi trainee to the lead, and the odds-on favourite then sliced out middle splits of :57.2 and 1:27.3 before scooting home in :29.2 to win by 1-1/2 lengths over Filter Hanover. Taking home third prize was Whistys Paradise.

The four-year-old daughter of Shadow Play-Wiskywisky Nancy O improved this year’s record to 2-4-4 from 19 starts with the win and her bankroll ballooned to $91,153. She is owned by Aaron Waxman of Carlisle, ON.