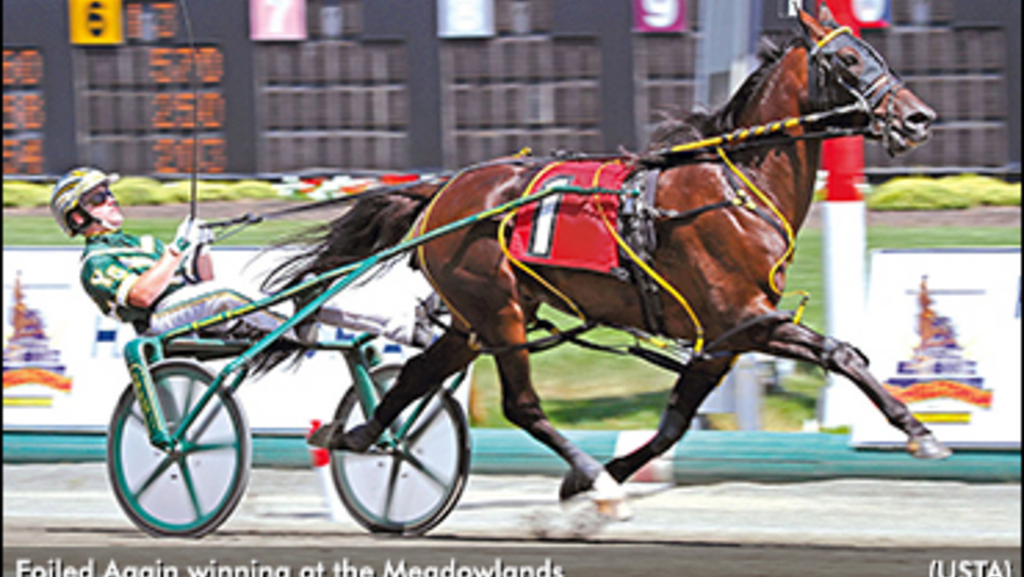 Foiled Again, the highest-earning Standardbred racehorse of all-time with $7,634,938 in his bankroll, has been selected for the Stan Bergstein / Proximity Award, the highest award in the sport voted on exclusively by the United States Harness Writers Association (USHWA).

Foiled Again, in the final stages of a whirlwind Farewell Tour as he faces mandatory retirement upon reaching 15 years of age on January 1, is a gelded son of Dragon Again out of the Artsplace mare In A Safe Place. He raced for trainer Herman Heitmann at two, three and into his fourth year before being purchased by Sylvia Burke, Weaver Bruscemi LLC (Mark Weaver and Michael Bruscemi) and JJK Stables LLC (the late Joseph Koury Sr. and his sons Joseph Jr. and Kevin). Mickey Burke, Sylvia’s husband and Ron’s father, was transitioning from raceway activities to overseeing the younger horses and he handled the conditioning of Foiled Again until Ron took over full-time training responsibility in November 2008.

Foiled Again reached his full potential under his new connections, staying a vital member of the free-for-all pacing community for half-a-dozen years. He was Older Pacing Horse of the Year in 2011, 2012 and 2013, during each of which he earned over $1 million. Foiled Again took his mark of 1:48 in 2013 at the age of nine in the elimination race of the Ben Franklin Pace at Pocono. He returned the next week to win the Franklin Final and then later in the year to sweep the Breeders Crown over the red clay.

Fans grew to embrace Foiled Again as he battled on at a high quality of performance over the years; they latched onto this “evergreen pacer” who they knew would always give them every ounce of his energy. Once he broke the record for earnings ($5.8 million by the trotter Ready Cash), he gained even more cache and attracted media attention like few other Standardbreds (or any racehorse).

As he entered his 14th year, perhaps a step or two off his peak speed but still competitive every time behind the gate, his connections decided to establish a “Foiled Again Farewell Tour,” matching him against local horses and letting fans around the United States and Canada give one last salute to the gallant pacer. He raced at eighteen different tracks during 2018, in ten different states and provinces, and seemed very little the worse for wear. When he raced at Harrah’s on Dec. 9, he returned to a track where he had first raced 4,165 days – 11 years, 4 months, and 25 days – earlier.

Foiled Again’s 331st and final start comes on Monday, Dec. 31 at The Meadows, the home track of the Burkes and Weaver Bruscemi, and as has been noted, “it’s unlikely there will be a dry eye in the house.” (Start 330 came at Mohawk last Saturday, where Foiled Again posted victory 109.)

Foiled Again is only the second horse to win the Bergstein – Proximity Award: the other was Rambling Willie, honoured in 1984 after a career that strikingly parallels Foiled Again’s in longevity, earnings, competitiveness in the free-for-all ranks for years and popularity among the race-going public. In an ever-changing world, Foiled Again reaches across 34 years to join another horse who didn’t know the meaning of the end of a mile, the end of a career or making outstanding contributions to harness racing.

It seems fitting that as the spotlight finds Foiled Again in his last campaign, it also finds his trainer and his ownership, who have been instrumental in the tremendous success of the horse – Ron Burke has been named Trainer of the Year for the third time (2011 and 2013 previously), while the Burke Racing Stable LLC and Weaver Bruscemi LLC combine will follow their 2013 Owners of the Year prize with another in 2018, in voting conducted by the U.S. Harness Writers Association (USHWA).

Ron Burke has been a force the last ten years, achieving success levels never reached in the sport. He will collect 1,000 victories with his far-flung barn in 2018, his third time posting four figures, and his stable will top the $21-million mark in purses won for the sixth year. For his outstanding 2018, Burke got more votes from USHWA than did any other human (one horse did top him, though – Foiled Again).

The stable sent out divisional champions Warrawee Ubeaut (2PF) and Dorsoduro Hanover (3PC and millionaire); these two teamed with Percy Blue Chip (3PF) to give Burke three Breeders Crown Championships during 2018. Seasoned pacers Filibuster Hanover and Rockin Ron also earned over $500,000, giving Burke Racing / Weaver Bruscemi five horses who took down over half a million; trainer Burke had a sixth in 3PF Youaremycandygirl. And then there was of course Foiled Again, who kept in good condition to race every year a Standardbred can race – 13, from the minimum of age two to the maximum of age fourteen.

An important component of Burke Racing Stable LLC and Weaver Bruscemi LLC is the amount that they give back to the sport which has provided them with successes and thrills. The Foiled Again Farewell Tour is a prime example. So too is their “policy” of usually having partners on most of their stakes horses – this is a way to give owners who might have a slight chance (to no chance) to have a Grand Circuit horses be a part of the excitement of campaigning a world-class competitor against the best in their division throughout the stakes season.

Foiled Again and his connections will be honoured at USHWA’s annual Dan Patch Awards Banquet, celebrating the best and brightest of harness racing in the past year. The banquet honouring the champions of 2018 will be held on Sunday, Feb. 24, 2019 at the Rosen Shingle Creek Resort in Orlando, FL, the climax of a weekend that also finds USHWA holding its annual national meetings.

Reservations for those attending can be made through USHWA’s website, www.ushwa.org; a link to the hotel’s computer is on the front page of the website. Those who would like to take out congratulatory ads for award winners in the always-popular Dan Patch Awards Journal can do so by contacting Kim Rinker at [email protected] (the 2018 journal is online at the writers’ website). Information about purchasing tickets for the dinner will become available and will be posted shortly.