Dayson became a millionaire Wednesday, Dec. 26 at The Meadows when he stalked the leader from the pocket and shot through the open stretch to capture the $18,000 Preferred Handicap Trot. Career earnings for the five-year-old Conway Hall-Nerveys Taurus gelding now stand at $1,001,712.

When Classic Banker ranged first over and was ready to power by leader True Blue Stride, Dayson remained locked at the rail. But Classic Banker lost stride, making the passing lane a viable route for Dayson, who powered through for Dave Palone and scored in 1:55. Parkhill Lancelot rallied for second, one-and-three-quarter lengths back, with PL Icabod third. 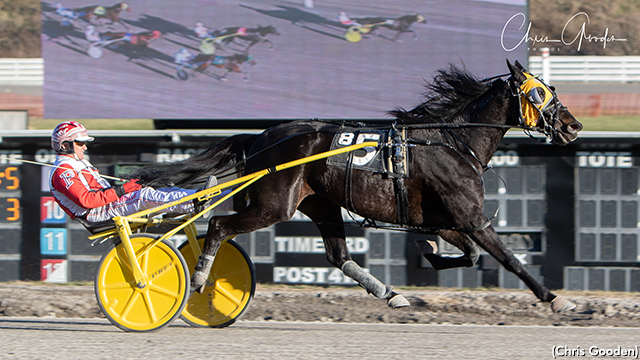 Ron Burke trains Dayson for Burke Racing Stable, Weaver Bruscemi LLC and J&T Silva-Purnel & Libby. At two, Dayson won seven-straight New York Sires Stake splits before breaking stride in the $225,000 final at Yonkers. As a sophomore, he won the Matron among other stakes.

It was one of six wins on the afternoon for Palone, including three for Burke. His victory in race 10 gave Burke 1,000 for the year, the third consecutive season he has reached or surpassed that mark. Jim Pantaleano fashioned a triple on the 13-race card.