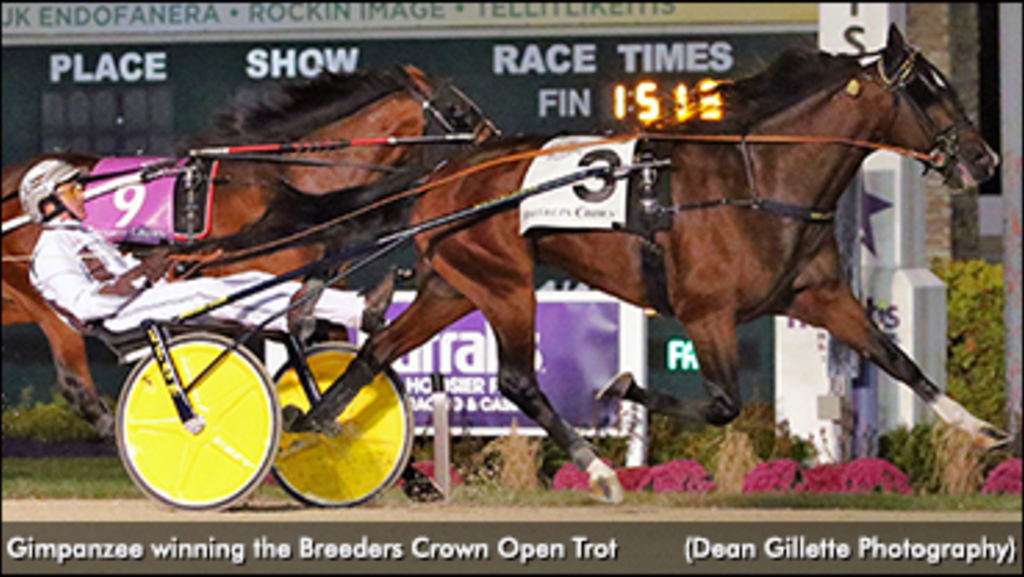 Courant Inc. and SRF Stable, owners of Gimpanzee, have announced today that Gimpanzee will retire to Diamond Creek Farm of Kentucky for stud duty in 2021. He will serve a book of 80 mares for a stud fee of $30,000. Syndication will follow the 2021 breeding season.

Gimpanzee is the first elite stallion prospect to be retired to stud in Kentucky since the Sire Stakes program was revamped.

The superbly consistent three-time Breeders Crown Winner was the 2018 Dan Patch Two-Year-Old and is the presumed 2020 Dan Patch Older Male Trotter. His bloodline, carefully crafted by breeder Order By Stables, is an excellent cross for Muscle Hill and Cantab Hall line mares. Gimpanzee is a Chapter Seven son out of a Muscle Massive mare, Steamy Windows, from the family of Mets Hall and ultimately Muscle Hill himself.

The Kentucky Sire Stakes program projects current and future increases in purses supported by the Red Mile and Oak Grove, with future plans for a third harness track. The Kentucky Horse Racing Commission recently announced a Stallion Bonus program that will go into effect in 2021. Any horse that results from a stallion standing in Kentucky and mare residing in Kentucky for 180 days, as well nominated of the program, are eligible to receive a 50-percent bonus for finishing first through fifth in all legs and the finals of the Championship Series Programs. Breeders are encouraged to board their mares in Kentucky for at least 180 days in the year they are bred to Gimpanzee to take advantage of the new Kentucky Stallion Bonus program.

Gimpanzee has a nearly flawless resume, leaving no questions about his talent and class. A future Hall of Famer joined Peace Corps and Mack Lobell as the only trotters to win Breeders Crown titles at ages two, three and four. He retired with 25 wins in 34 starts, a mark of 1:50 and earnings of over $2.7 million.

“I’m honoured to have trained Gimpanzee during his amazing career,” said trainer Marcus Melander, “From the start, he has been a world champion and we think he will have a very successful stallion career.” Despite losing his flagship horse to the stallion barn Melander added, “I’ll be very excited to train his babies in the future.”

Diamond Creek Farm would like to thank Anders Ström and Lennart Ågren for their trust and partnership. “We believe Gimpanzee is the next great horse in the evolution of the breed. He is the most dynamic trotter I’ve ever seen,” said Diamond Creek’s Adam Bowden, “From being an undefeated two-year-old and triple Breeeders Crown winner to winning on the front, from behind, first over and even from post 13, he did it all. Including the takedown of every great horse of his generation. Our entire staff is humbled to become the caretakers of Gimpanzee. We are excited to share in the success of the Kentucky Sire Stakes Program and partner with our fellow Kentucky breeders to bring stallions back to the Bluegrass.”

Limited breedings available to top fillies and mares. For more information on booking mares or for applications, contact Diamond Creek at 717.638.7100 or [email protected].