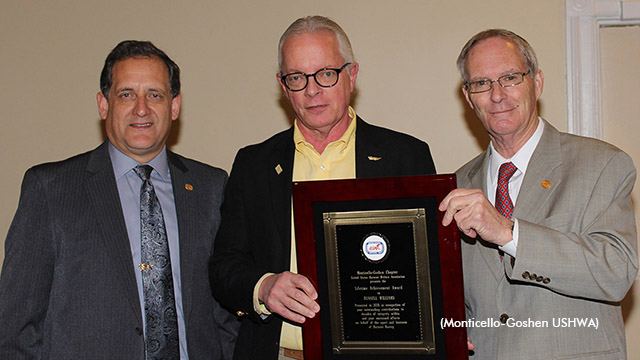 One hundred and fifty Standardbred industry enthusiasts joined the Harness Writers in presenting Williams with the chapter’s highest honour, their Lifetime Achievement Award at the Wallkill Golf Club in Middletown, New York on Sunday evening (Dec. 12). While it was not Williams’ first industry tribute, he also noted, “I appreciate this award and all the work the Monticello-Goshen chapter does to distinguish individual success in our sport.”

Also the president and CEO of Hanover Shoe Farms, which enjoyed a record season in 2021, Williams admits there is still a lot of work to do on behalf of our industry and he is ready for the challenge and eager do his part.

In addition to a host of human honourees, the season’s top horses around the Orange and Sullivan county racetracks were recognized for their accomplishments on the racetrack. The local Horse of the Year award was broken down into three categories: Pacing Horse of the Year, Epaulette A (trained by Laura Perino); Pacing Mare of the Year, Chasethecloudsway (Chris Petrelli); Trotter of the Year Chip Chip Conway (Gary Messenger).