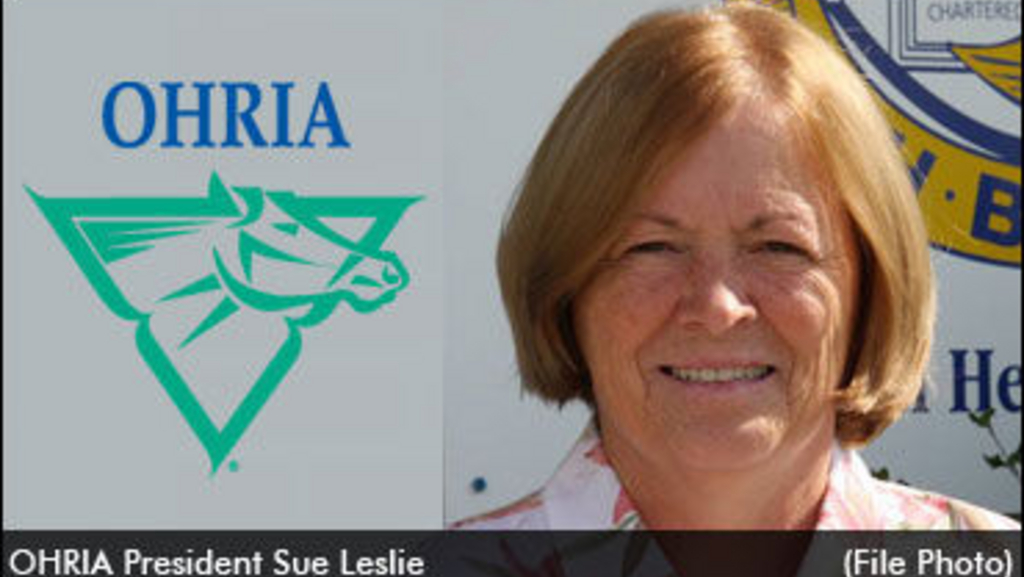 On Tuesday, December 11, the Ontario Horse Racing Industry Association announced that it supports the Ontario Progressive Conservative Party's push to incorporate the provincial horse racing and breeding sector in any future gaming plans. OHRIA also announced that it is calling on the Ontario Liberal Government to follow through on its commitment to help develop a sustainable horse racing and breeding industry in the province.

The contents of the OHRIA release appear below.

The Ontario Horse Racing Industry Association is congratulating Ontario's Progressive Conservative Party on their commitment to developing an integrated strategy for gaming in Ontario that involves a strong horse racing and breeding sector.

Today the Ontario PCs announced their plans to lead consultations on the future of Ontario's gaming industry and their intention to include Horse Racing as an integral part of the discussion.

The horse racing and breeding industry is in crisis and has suffered repeated blows at the hands of the current government as they push forward their plan to end the slots-at-racetracks program by March of 2013.

Ontario's cancellation of the Slots at Racetracks Program has been devastating to the industry, heavily rooted in the rural economy. With 55,000 jobs at risk, the government needs to take serious measures to develop a plan that is economically and socially viable.

"It is encouraging to see the PCs taking positive steps toward creating an inclusive and integrated gaming industry in Ontario, one that includes Racing. The horse racing and breeding industry is part of the very fabric of gaming in this Province, and the government needs to understand its economic and cultural value," said Sue Leslie, president of OHRIA.

The Ontario Horse Racing Industry Association is calling on the provincial government to follow through on their commitment to help develop a sustainable horse racing and breeding industry in Ontario.

OHRIA is asking the provincial government to defer the OLG's current modernization strategy until consultations that involve all sectors of Ontario's gaming industry, including horse racing, can be integrated into OLG's modernization plans and extend the Slots at Racetracks Program from March 31, 2013 to allow the 2013 racing season to get underway, while negotiations occur.

"There is no doubt horse racing and breeding provide a significant economic impact to Ontario's economy, rural employment base and more than one billion dollars a year in gaming revenue for the provincial treasury. We want to continue to be a partner with the government, but need to be given the opportunity to compete fairly with other gaming strategies," added Leslie.

Despite Sue Leslie's support of the Conservatives, the Conservative Party seems to be hiding their support of the racing industry quite well. I just searched their website for any mention of horse racing and it is nowhere to be found - some support!
We have just wasted 9 months trying to get a handout from the government and OHRIA (and our other industry organizations)have not done anything that I know of to put this industry on a course of self sufficiency. A lot of talk and public pronouncements and announcements but we are in exactly the same position as we were when Duncan made his announcement in March.
Where is the practical support/guidance/funding/business advice from our leaders to the people who actually have invested and work in the industry? What have they done to help us survive? Talking to the Liberals was a no go from the beginning but no one apparently developed an alternative course of action for us to follow or even consider. Leadership is reading the future, evaluating alternatives and planning for all eventualities. Time for a change in our industry leadership also.

This disaster mode the OLGA

This disaster mode the OLGA and the Liberal party have created has gone on long enough, we cannot depend on anyone, but ourselves. We ran scared, not breeding our broadmares and not purchasing OSS yearlings this year. A legal injunction, paid for by our donations just, might be our salvation.

The present government will

The present government will be in power well past the March 31 OLG/Slots drop dead date.

1) McGuinty has said the government will not be recalled until after the Liberal leadership convention (end of January).

2) The new Liberal Leader will take a month (or more) to assess the mess, and map out a strategy. (earliest recall -- end of February).

3) If the opposition could somehow craft a non-confidence situation/motion, the house would be dissolved and an election would be called for 30 days from the day the government was defeated (earliest -- end of March).

4) Even if the newly elected government recalled Parliament immediately, the earliest the House would re-convene would be mid April

We all know that after the Genie is out of the Bottle (March 31), it will be impossible to get it back in.

Seems to me the industry should be looking at filing a legal injunction against the OLG, prohibiting the end of the Slots at Racing Program until Parliament has an opportunity to review the OLG gaming strategy.

I'm not a lawyer and don't know all the specifics about filing an injunction, but I have been involved in business and politics and have witnessed how a simple injunction can throw a wrench into the best laid plans.

I believe there are a number of justified and legal reasons to file an injunction. Hope some of the legal minds in the crowd will give this some consideration.

For those not sure of the powers of an injunction, I have included a link to a CBC story discussing an temporary injunction against Suncor Energy last month.

McGuinty,Godfrey,Tananbomb,Dwight Duncan,and so many more Liberals are not reading Standardbred Canada websites but I commend Sue and OHRIA as well as OHHA & SBOA, for keeping up the preasure but with no decission making from Queens Park
the ball is in their court and they have an overwhelming advantage -- we need them but they don't need us to achieve their goal of selling gaming to the highest bidder - be very careful Sue with 100% of the Hudak plan to offer OLG sites to the existing racetrack owners - their lack of accountability carries a large part of why we are in this boat right now. Hudak has a better plan than the Liberals but tred lightly when throwing 100% support behind it.

Who else is getting completly

Who else is getting completly fed up with all the lip service that's gone on for months now. Its time for someone with a new idea on how to put a wrench into the liberals plan on ruining the horse racing industry. There has to be a way!!!

I fear if the existing

I fear if the existing government doesn't fall soon, racing will get mere scraps in the name of transitional aid. Face it, the closer you get to March 31, the less time you have to make your case and be forced into taking whatever pittance they toss racing's way.

The OLG and Liberals may

The OLG and Liberals may already have achieved their goal of eliminating our industry so we are totally out of the gaming picture. In addition to all the stallions that have fled the province, the latest statistic I heard is that a shocking 62% fewer mares were bred in 2012. And this resulted simply as a reaction to the OLG's reckless announcement. On top of that we all know what a fiasco the Fall sales were. They are just slowly dividing and conquering us to the point there is no will to fight and nothing left to fight for. But while we can suppose you can "cull" the herd of horses successfully, what of all the people that work in the industry who in most cases have invested their lives. Where do they go ? What will they do ?

Well said Sue. We are now

Well said Sue. We are now well over 8 months since the disastrous announcement and a tad more then 3 months till ground zero and thus far only talk and no action whatsoever. Breeders were decimated in the fall and the quality of life for anybody that is the slight bit dependant on horse racing has been horrendous. The future has been bleek for too long now. Unbelievable that a democratic government ( ruled by the people for the people ) can be allowed to inflict so much hardship on so many in order to put slots in bingo parlours.