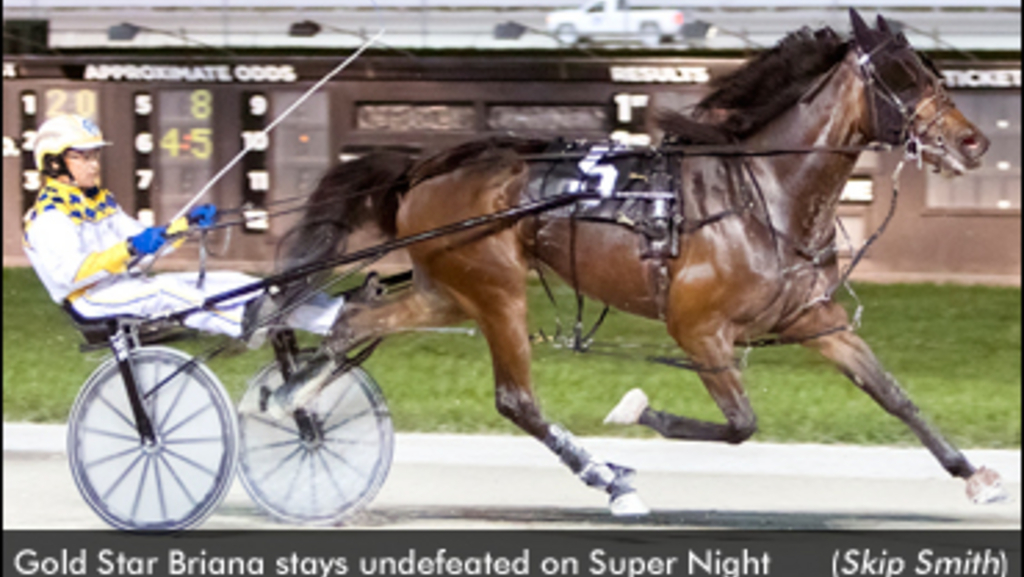 The Florida Standardbred Breeders and Owners Association presented their annual Super Night Stakes program for Florida-bred Standardbreds with over $430,000 in purses on the line for the eight classes of two and three-year-olds.

Gold Star Briana kept her juvenile record unblemished with her seventh consecutive victory — this one in 2:00.3.

The daughter of Basil, trained by Dan Hennessey for owner Kevin Kelly, was driven by Hall of Fame driver Wally Hennessey and scored by two and a quarter lengths over the pacesetting Trotting Missmissy (Donald Dupont), who cut fractions of :29.4, :59.4 and 1:30.1 before submitting to the winner turning for home. All Star Fame (Dan Clements) finished third while Trottime Fool was fourth. Mitzie was fifth in the quintet.

Rexamillion led every step of his journey in scoring a scintillating win measuring 13-3/4 lengths.

The altered son of Proud Bushy, owned by Richard Dunmire, along with Jay and trainer Kim Sears, sprinted away from his foes past the opening quarter of :29.2 and continued to stretch his lead throughout the rest of the journey, clocking subsequent fractions of :58.2 and 1:28.2 before stopping the timer in 1:59.2, a new lifetime mark.

Bob Roberts was in the sulky for the win — Rexamillion’s fifth straight.

Trottime Splendor (Wally Hennessey) was second while Savin Rock (John Campagnuolo) finished third, 19-1/2 lengths away. Fifty Fifty Ninety was next with Proud Joe T fifth, his chances foiled by miscues throughout the mile.

Rexamillion now sports a 5-1-1 scorecard in seven lifetime starts, good for earnings of $58,481.

Gleneagles, the splendid two-year-old Mysticism colt, got picture perfect rating from Wally Hennessey to capture the $53,600 Florida Breeders Stake for pacing colts and geldings in 1:55.

Trained by Jim McDonald for the Pinhook Stable, Gleneagles was on the engine from the get-go from his outside six post to force main rival Conmans Dream (Jason MacDougall) in the “garden spot” and carded fractions of :28.2, :58.1 and 1:27.2 before sprinting home in :27.3 to score a handy win measuring one and a quarter lengths over Conmans Dream, the latter now a “bridesmaid” to Gleneagles in their last five meetings. R Chism (Mike Micallef) finished third, four and a half lengths back while ICU Diamond T and Danza picked up the minors.

In garnering his sixth consecutive victory at Pompano Park, Gleneagles, with sweeps of the Sunshine State Stake Final, the Stallion Stake and the Aylor Memorial to go along with this Breeders Stake win, now has a bankroll of $71,848.

As the 1-5 favourite kicking off the pari-mutuel program, Gleneagles paid $2.40 to his multitude of backers.

Prairie Fortune, off at 1-20 in his last four pari-mutuel starts, justified the confidence of his followers this night by scoring a decisive win in the $56,100 Breeders Stakes Final for three-year-old colts and geldings.

Owned by Laurie Poulin along with trainer/driver Mike Deters, Prairie Fortune, an outstanding gelded son of Arapa Victory, lolly-gagged out of the gate from his rail post position before tilting to the outside from last three-eighths into the mile and surging into the lead three-eighths from home and on to a victory measuring five and a quarter lengths over Railee Workable (Mickey Mc Nichol). Harrison (Wally Hennessey) was third — 25 lengths away — with Victory Park and RJs Iron Man fourth and fifth, respectively, after being doomed by miscues during the mile.

Owned by John “The Owosso Flash” Spindler along with Laurie Poulin and trainer Mike Deters, Deters was in the bike as this daughter of Royal Millennium led every step of her journey, carving panels of :28.1, :57.4 and 1:26.3 before drawing away late on the strength of her :28.3 finale. Caitlins Romance (Rick Plano), suffering from a bobble before the start, rallied courageously from last to finish a clear second while Diamond Lily (Mike Micallef), in the garden spot much of the way, finished third. Gold Star Lovebug was fourth while Gold Star Mysti finished fifth in the field of six.

Prairie Sweetheart now has earnings of $63,274 as her career blossoms forward to go along with a track record tying 1:53.3 mark for juvenile pacing fillies.

Zendaya Pulls Off the Upset in $54,700 Three-Year-Old Filly Trot

Zendaya picked the perfect night to break her maiden as this three-year-old daughter of Proud Bushy pulled off the mild 6-1 upset in the $54,700 Breeders Stake for three-year-old trotting fillies.

Owned by Jay Sears along with trainer Kim Sears, Zendaya was driven to victory by Bob Roberts, giving him his second Super Night victory.

Run Around Sue S (Kevin Wallis) was second at 27-1, a head back of the winner after taking a narrow lead right before the wire with Livy M (Wally Hennessey) third as the 1-10 favourite.

Run Around Sue showed the best gate speed and took command early as Zendaya left alertly, as well, with Livy M away third, but on the move from that cozy spot early to take command at the :30.1 opener. Livy M continued to cut mile — 1:00.1 and 1:31 — and led by one and a half lengths turning for home, but was unable to withstand the closing kicks of the top pair, with Zendaya closing quickest of all to nail the win in the final stride in 2:01.1.

In breaking her maiden, Zendaya sent her earnings for the season to $37,186 on the strength of this, her biggest payday career-wise.

Second choice in the betting, Zendaya rewarded her faithful with a $15.00 mutuel.

This son of Royal Millennium made a brilliant move just short of the opening quarter -- :28.1 -- and went on to post subsequent fractions of :56.3 and 1:24.2 before his :28 finale left no doubt late -- the margin two and a half lengths over Caesars Forum and six lengths over Drake. Gold Star Roger and Stutz completed the quintet.

In garnering his sixth win of the year, Owosso Flash, sent his seasonal bounty to $59,844 and lifetime earnings to $113,394 to go along with his new mark.

Owosso Flash is owned by Laurie Poulin along with trainer/driver Deters.

The victory, incidentally, was not only a “hat trick” for Deters in the bike, it sent his UDRS over the .900 mark with a 16-4-0 scorecard in 20 starts in the sulky this meeting.

Davita, a “bridesmaid” to Gold Star Dynasty in her last three starts, finally got the job done on Super Night by taking top honours in the $55,550 Breeders Stake for three-year-old pacing fillies.

This daughter of Six Of Diamonds, owned by Richard Dunmire along with Jay and (trainer) Kim Sears, was handled by Corey Braden and stalked the favourite, Gold Star Dynasty (Aaron Byron), after relinquishing an early lead to her foe at the opening panel in a hot :27.4. With Gold Star Dynasty hitting subsequent markers in :57 and 1:27, Davita left her cozy pocket and wore down Gold Star Dynasty at the sixteenth pole and then held off the late surging Paxxie (Kevin Wallis) to win by a length. Gold Star Dynasty did finish third, two lengths away, while Gold Star Sonata finished fourth. Gold Star Charming picked up the final award in the sextet of fillies.

Racing continues of Monday night with a pentafecta carryover from Super Night guaranteeing a pool of $7,500. Post time is 7:30 p.m.