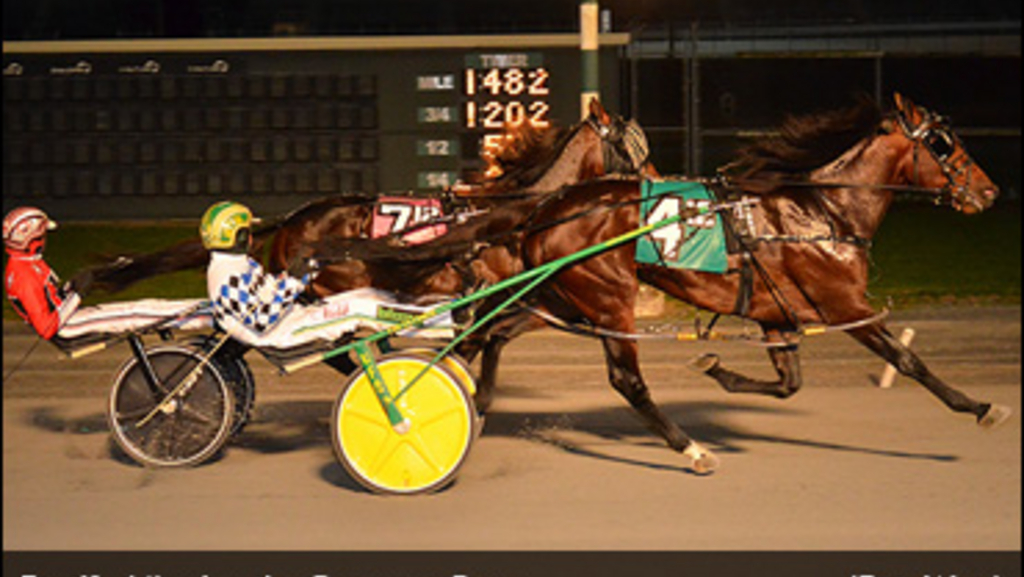 Tim Tetrick spotted Fortify in a perfect position to pounce on a vulnerable favourite and capture the $325,000 Progress Pace for three-year-old pacing colts and geldings on Wednesday (Nov. 25) at Dover Downs.

A field of eight sophomore pacers lined up for the lucrative stakes event, with late season standouts No Lou Zing and Cattlewash drawing posts seven and eight, respectively. Both colts were forwardly placed off the gate but Tattoo Artist (Yannick Gingras) outsprinted them all from post six. Favoured No Lou Zing (Dexter Dunn) forged on with front-end intentions, but paid a price to grab the lead. Tattoo Artist fronted the field through a :25.2 opening quarter with No Lou Zing clearing to the top just before a :53 half.

Fortify was settled in fifth behind second choice Cattlewash (David Miller) and forced Miller's hand by shifting into the outer flow. That move flushed Cattlewash from fourth, and Miller advanced his charge first up down the backstretch. The third quarter was reached in 1:20.2, with Tetrick sensing this was the time to move three-wide with Fortify. Cattlewash was not advancing, but Fortify was around the far turn and loomed the danger for the pacesetting No Lou Zing. In deep stretch, No Lou Zing fought valiantly but Fortify's fresher legs proved the difference. Fortify tripped the timer in 1:48.2, a half-length better than his stablemate. Catch The Fire (Mike Wilder) closed between horses to complete the triactor.

“I liked the way he raced last week,” said Tetrick after the win, one of his five of the card. “I knew I needed a trip in the final. It all worked out because I was able to follow Cattlewash. However, I was disappointed he (Cattlewash) couldn't carry me further and I had to go three wide.”

A homebred of Diamond Creek Racing, Fortify (Sweet Lou - Cant Stop Me Now) picked up his fourth win of the season in 14 starts. Since a midseason shift to the stable of trainer Nancy Takter, Fortify has compiled a 3-1-2 summary from nine outings.

“He (Fortify) is a pleasure to be around,” said Takter. “The owners wanted to skip the Breeders Crown and I’m glad they did. He will go back to Diamond Creek and return as a four-year-old.”

Two $100,000 DSBF finals were held at Dover Downs for two-year-old colt and filly pacers on the Progress Pace undercard.

The "Ramona Hubbard" for the filly pacers was won by Littlebagoftricks (Roddys Bags Again-Bit Of Trick) in 1:52.4, a new lifetime record and stakes record for the filly. Driver Russell Foster engineered the victory for trainer/co-owner Josh Green and co-owners Charles Cochran, III and Richard Lombardo. The place filly was Hey Hey Dbay followed by Stealing Bases.