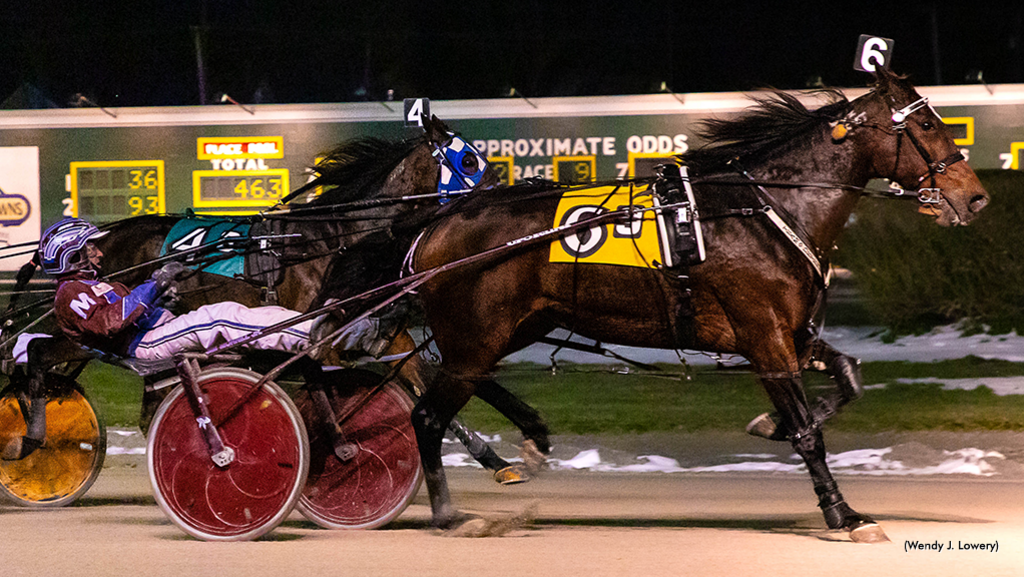 For the second week in a row, The Stunning Nun N took on the best distaff competitors in western New York and came out victorious again in the $14,000 Open I Handicap Pace for fillies and mares at Batavia Downs on Wednesday evening (Nov. 23).

Shallow grabbed the early lead but was overtaken by The Stunning Nun N (Jim Morrill Jr.) who came flying up the rim at the :28.4 quarter. From there Morrill controlled the pace with a :58.3 half and 1:27.3 three-quarters where The Stunning Nun N shook off a minor bid from Miley Rose, but still had a threat looming from the tripping Shallow. At the top of the stretch The Stunning Nun N had a 1-1/2-length lead and although Shallow did make a charge heading for home, The Stunning Nun N held to form under a line drive from Morrill to win by one in 1:56.3.

It was the third top-class win for The Stunning Nun N since coming to Batavia and seventh win overall for the year, matching her career best. The seven-year-old daughter of Bettors Delight-Christian Doll is owned by her trainer Mike Deters, in partnership with Joel Warner, John Manning and Barbara Jensen. She paid $4.50 to win.

It was one of two wins for Deters on the night and one of four for Morrill, who had a natural hat trick in Race 8, 9 and 10. Those four victories pulled Morrill to within only three wins of Kevin Cummings (124 wins to 121) who is the current dash leader at the meet and had two wins himself on Wednesday. With only seven live cards of racing left in 2022, this battle will most likely go down to the final night.

Trainers Shawn McDonough, Andy Gardner and Kevin Reynolds Jr. all joined Deters for training wins Wednesday as they each won two races during the night.

Live racing resumes at Batavia Downs on Saturday (Nov. 26) at 6 p.m. and there is another carryover available. The Jackpot Hi-5 Pentafecta in the 13th race will start with $4,796 in the pool.