The gelded son of Anders Bluestone and Stargazer Lily yielded to Navy Blue and Canoe Trip through a :28.2 first quarter before brushing to the lead in front of the grandstand. After clearing with nine-sixteenths to go, Rivers sprinted 2-1/2 lengths clear to a :57.2 half. Navy Blue tightened down in the pocket nearing three-quarters in 1:27.1 and edged to the outside at the eighth pole, but Rivers rose to the challenge, prevailing by a diminishing nose. Navy Blue, who won in the second preliminary round, was 5-1/4 lengths better than LGs Reed O Wen, who finished third. 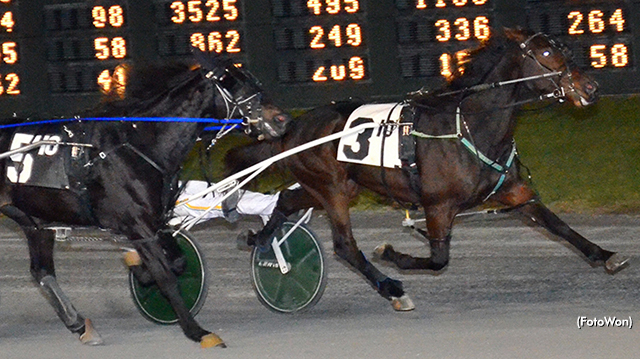 On the strength of a 4-1/4-length win in the second preliminary round last week, Shes All Woman ($5.60) dug deep late to repel 3-2 favourite Our Last Penny in the $100,000 Marv Bachrad Memorial, the DSBF final for two-year-old trotting fillies.

Jared Moyer pushed Shes All Woman forward from post 7, and the pair landed in the pocket behind early pacesetter Just Pump It, who tore through a :28.3 first quarter before yielding to Franky Doyle with a lap to go. Now relegated to third, Shes All Woman remained in the clear through a :58.1 half and angled off the pegs to advance around a struggling Just Pump It. Shes All Woman steamrolled to the front nearing three-quarters in 1:28.3, and Our Last Penny — who was eight lengths behind at the bell — chased live flow out of fifth to work to within striking range on the far turn. Our Last Penny and trainer-driver Rod Allen angled back to the outside after a brief tuck turning for home, but despite her strongest rally, Shes All Woman held her ground to win by a head in 1:59.4. Miss Timber Wolf finished third, beaten 6-1/4 lengths. 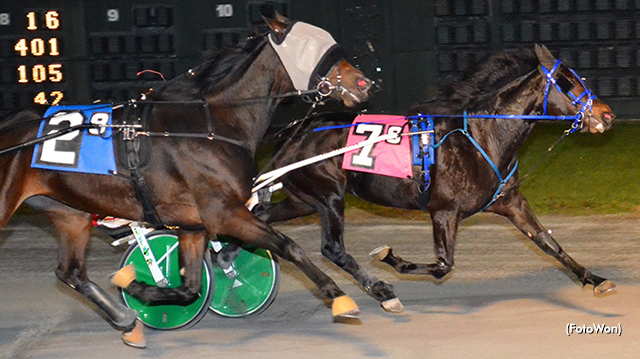 One remaining DSBF two-year-old final is slated for Wednesday (Nov. 24): The $100,000 Ramona Hubbard, for rookie pacing fillies, is carded as the 10th event on the 15-race Thanksgiving Eve card.

Rod Allen, who trained and drove his homebred Our Last Penny throughout the DSBF series, came up a head short of ending his storied harness racing career on a winning note, as he has announced his retirement from active participation in the sport.

"Rod has been a major participant in the Breeders' Fund since his dad, Carl, committed to standing CR Commando in Delaware at the inception of the program," said Judy Davis-Wilson, executive director of the DSBF. "He has always carried himself with grace and class, even in defeat. We want to thank Rod for all his years spent in the industry, and especially in our program."

Allen enjoyed success on harness racing's grandest stage, having won five Breeders Crowns as an owner and three as a driver — including two with the legendary CR Kay Suzie. But it is his class and work ethic off the track that stands out to many of his colleagues, including Hall of Fame driver John Campbell:

"I have known Rod and his family for many years going back to my racing days in Michigan," Campbell, the current president and CEO of the Hambletonian Society, said. "I've always respected the Allen family for their hard work, determination, and the resulting successes they have achieved. Rod always exhibited class, no matter the wins or the losses. It is somewhat sad for me to think of Rod retiring, as the Allen name has been so prominent in racing for many years. I wish Rod and his family all the best moving forward."

The 65-year-old Michigan native and current Florida resident won 519 races and $11.9 million in purses as a driver, and trained the winners of 110 races since the United States Trotting Association began maintaining training statistics in 1991.