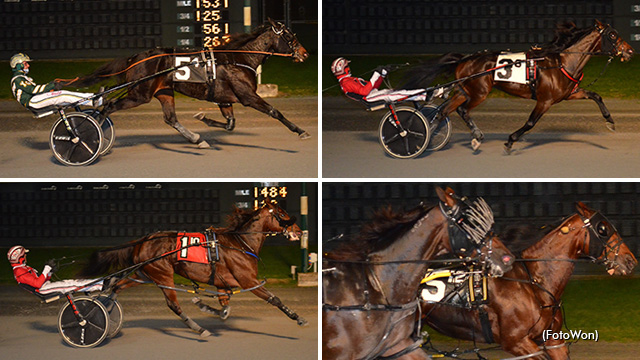 Amigo Volo’s 1:50.2 effort in the $162,350 Matron for three-year-old trotting colts and geldings earned him a place in the track and world record books, knocking over a second off Pinkman’s world record for sophomore trotting geldings taken in 2015 at The Downs at Mohegan Sun Pocono.

The gelded son of Father Patrick strode to a clear lead over Coventry Hall (Andy McCarthy) and controlled splits of :26.3 and :54.4 while pursued — albeit futilely — by the first-over Play Trix On Me (Joe Bongiorno) to that point. With three-eighths to go, Amigo Volo began to shake away, reaching three-quarters in 1:23 and evading Back Of The Neck (Åke Svanstedt) — who circled three-wide into second — through the far turn.

In all, Amigo Volo amassed 6-1/2 lengths of clearance at the end of his record-breaking mile and 15th career win. Svanstedt trainees finished second through fifth: Back Of The Neck, Coventry Hall, Jula Trix Treasure (Yannick Gingras) and EL Ideal (Andy Miller).

Richard “Nifty” Norman trains Amigo Volo, who now has earned just over $1.5 million, for the Pinske Stables and David J. Miller. The two-time Breeders Crown winner completed a sweep of the Matron Stakes as well, having won as a two-year-old in 2019 by the same 6-1/2-length margin.

Party Girl Hill may have missed Kiss Me Onthebeach’s divisional world record by two-fifths of a second, but her 1:49 performance in the $154,450 Matron for three-year-old pacing fillies landed her in the Dover record books.

The daughter of Captaintreacherous yielded to third to stalk Priceless (Andy Miller) and Lyons Sentinel (Tim Tetrick) through a blistering :25.4 first quarter before making her move up the far side. When Lyons Sentinel edged out of the pocket at the :54.2 midway stage, Dunn slid Party Girl Hill second-over to follow live cover. Lyons Sentinel put Priceless away with five-sixteenths to go, and after losing cover, Party Girl Hill continued on to strike the front midway on the far turn before winning by a measured 1-3/4 lengths. JK First Lady (Gingras) rode the winner’s cover to finish second; Rocknificent (Scott Zeron) also benefitted from the outer tier and gained into third.

Party Girl Hill, whose only defeat in 16 career starts to date came in the Breeders Crown, has amassed $880,345 in earnings — all this season. Chris Ryder trains the Tom Hill homebred.

An early break by Hambletonian winner and even money favourite Ramona Hill prevented her from finding redemption in the $163,050 Matron for sophomore trotting fillies, and it also paved the way for Hambletonian Oaks winner Sorella ($5.40) to score the 10th victory of her career.

Yannick Gingras used just a bit more than a :26.3 first quarter to work Sorella clear of early pacesetter Absattitudexpress (Tetrick), before keeping the first-over Crucial (David Miller) at bay through a :58.2 middle half and evading a wide rally by 17-1 outsider Guinevere Hall (Dunn) to win by 1-1/2 lengths in 1:53.1. Absattitudexpress finished third.

The retirement of Tall Dark Stranger made the $179,600 Matron for sophomore male pacers far more wide open than most previous events within the division, and the late-blooming Cattlewash ($2.80) had to work for every penny of the winner’s share of the purse.

The son of Somebeachsomewhere had to exert himself through a :26 first-quarter duel with Tattoo Artist (Gingras) before clearing shortly thereafter — but once in control of the terms, David Miller had little opportunity to ration Cattlewash’s speed. After only managing to rate the half to :53.4, Cattlewash faced first-over pressure from Little Brown Jug winner Captain Barbossa (Joe Bongiorno) up the far side.

While Cattlewash shrugged off Captain Barbossa’s challenge on the final turn, another pair of challengers was waiting in the wings to take their shots in the final furlong: Tattoo Artist launched for the open stretch, and No Lou Zing (Dunn) vaulted off cover. Cattlewash was driven out to narrowly prevail in 1:48.3. No Lou Zing lunged late for second over Tattoo Artist, who was fully extended to stay on.

In the sub-featured $20,000 Open Handicap Pace, Goldberg ($3.40) earned his eighth win of the season with a 1:50.2 score over Robbie Burns N (McCarthy) and Itsrockandroll A (Callahan). Montrell Teague drove the Brenda Teague trainee.