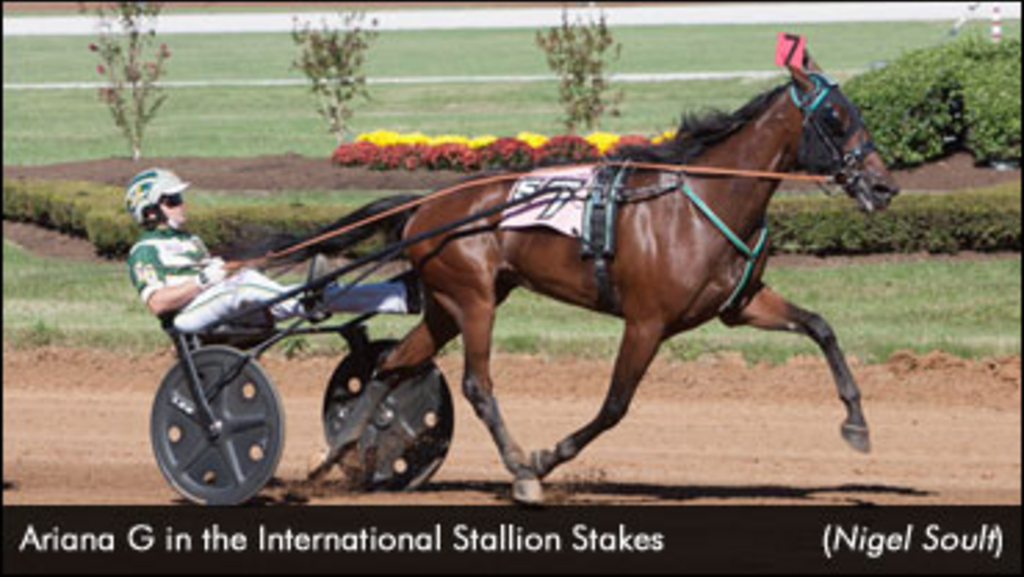 After having overtaken pacesetter Cool Cates near the half-mile pole, Ariana G strolled around the far turn and through the stretch to win one of four divisions of the International Stallion Stakes for two-year-old trotting fillies in 1:51.4 on Friday, Oct. 7 at the Red Mile.

After having set splits of :27.4 and :55.4, Cool Cates led before losing the lead to Ariana G, who was flushed first over by Chezatter approaching the final turn. Ariana G parked Chezatter passing three-quarters, timed in 1:24.2. Driver Yannick Gingras had Ariana G under a hand drive in the stretch while Chezatter attempted to pursue her on the outside. She hit the line nearly two lengths in front of Chezatter, while Evelyn trotted down the centre of the track to take third.

Trained by Jimmy Takter, Ariana G, by Muscle Hill and out of the Cantab Hall mare Cantab It All, won her eighth race in nine starts this year. She has now compiled $438,967 in earnings for owners Marvin Katz and Al Libfeld. She paid $2.40 to win.

“This is really thrilling for both myself and Al,” Katz said. “Jimmy has done a fabulous, fabulous job, but this is as exciting as it has ever been for us. She’s our filly; we bred her through our program and we’re so proud of it. It shows that we’re really producing top-flight horses.”

“She showed some ability in the paddock,” Libfeld said regarding the pair’s decision to keep Ariana G. “It was not a hard choice to make.”

“That was very impressive; this filly is really scary,” Takter said. “Yannick said that he shut her down through the whole stretch; if he would’ve let her go a little bit and pick up a gear for the record, he said she would’ve trotted way under 1:51.”

Treviso tracked Hillarmbro as she sped around the course, but exited the pocket and edged to a 1:53.1 victory.

Senia Hanover grabbed command and led through a :28.3 opening quarter before yielding to Hillarmbro into the backstretch. Flushed out by Treviso, Hillarmbro extended to a wide enough lead for Treviso to tuck into the pocket, and Hillarmbro held control through a :55.1 half. The two drew away from Senia Hanover as she faltered around the turn. The 3-5 favourite, Thats All Moni, had to circle by her from fourth heading to three-quarters, already trailing Hillarmbro and Treviso by four lengths through three-quarters in 1:23.2.

Hillarmbro maintained control as Treviso stalled to her outside. By the eighth pole, she began advancing towards Hillarmbro. Treviso soon matched strides with Hillarmbro in the final yards before she pushed herself in front at the wire.

Treviso is by Muscle Massive and is out of the Taurus Dream mare Valbonela. Treviso has now won five of her nine starts this year and has ow earned $144,569 for owners Kils Brothers Stable and Carrie Norris. Treviso is trained and driven by Charlie Norris. She paid $8.20.

“I thought for sure Trond (Smedshammer, who was driving Hillarmbro) would leave,” Norris said. “I didn’t mind following her after the way she raced last week, but Andy (Miller, driving Senia Hanover) kind of surprised me; we were trotting pretty fast. She was relaxed; most [horses] aren’t relaxed going that fast. Last week she was a little grabby, but today she was two fingers.”

After having dove to the cones as the stretch-battling leaders tired, Temple Ruins squeezed to a 1:54.4 win over Feed Your Head and Overdraft Volo.

Temple Ruins has now won three of her 10 seasonal starts. Temple Ruins is by Donato Hanover and is out of the Muscles Yankee mare Temple Of Heaven. Temple Ruins has earned $176,885 for owners Burke Racing Stable, Michelle Yanek, Paul Treiber, and Weaver Bruscemi LLC. She is trained by Ron Burke and was driven by Brian Sears on Friday. She paid $30.60 to win.

“Last week, she still had a lot of trot finishing,” Sears said. “She really doesn’t have that high speed that a lot of these [fillies] here do have, but she definitely keeps going and doesn’t get that tired.

“She had a little trot; I was gaining some ground, so if I had room [I felt I could get up]. It was pretty tight at the wire, but I was glad to see us come up a winner.”

Ice Attraction moved to the lead after the quarter and remained in front to win her International Stallion Stakes division in 1:53.3.

Ice Attraction, who is by Muscle Hill and is out of the Conway Hall mare The Ice Queen, won her third race in what was her seventh start of the season. She has now earned $67,175 for owners Ake Svanstedt, Douglas Sipple, Mal & Janet Burroughs and Little E LLC. Ice Attraction is trained and driven by Ake Svanstedt. She paid $6.40 to win.

“I’ve gone in with Ake on a couple of horses,” part-owner Jeff Gural said. “When he came over, he actually bought a horse I bred, so I walked over to thank him and that’s how I met him. I told him if he needed a partner on any horses to give me a call, and I’ve been lucky, to tell you the truth. I’m partners on a few, but three of them raced here so far and I’ve got a first, a second, and a third.

“A lot of [Ake’s] horses got sick, including this one,” Gural also said. “We had hoped to race last week, but we were out 31 days so we had to qualify. I was anxious to see her race because I saw her baby race and I thought she was a good filly, but then she got sick and I was kind of disappointed. It looks like Ake’s got her on the right track.”

Ice Attraction’s recent wins also include a $28,410 Tompkins-Geers division and a $29,190 Reynolds division at Tioga Downs.