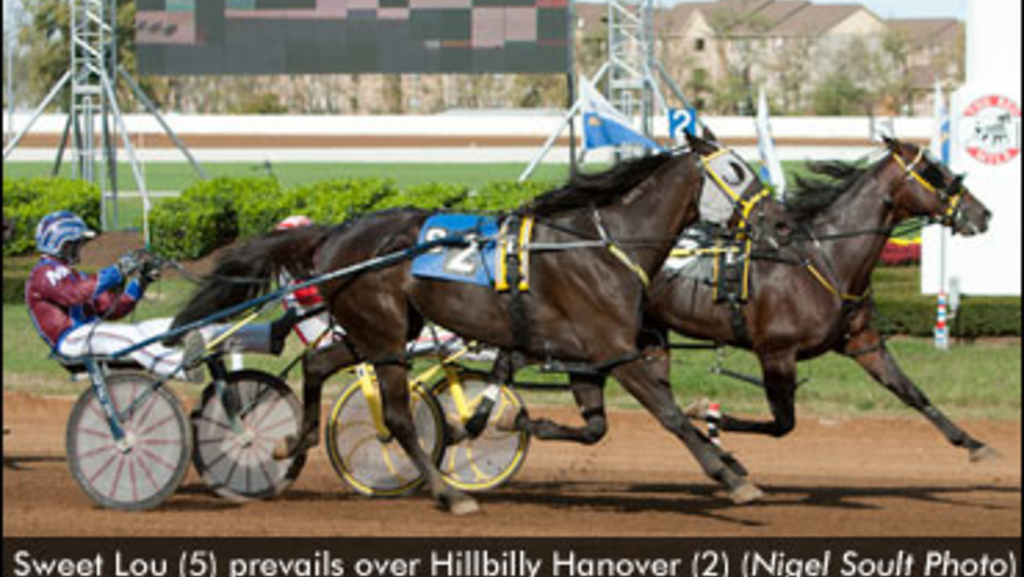 Romantic Moment made a quarter brush to the lead and took the field around the Lexington oval to win the first division of the $222,000 Glen Garnsey Memorial Tattersalls Pace in 1:50.3.

Destinys Chance fired off the gate and took the top banking into the first turn, with Romantic Moment and driver Yannick Gingras in second and Ramalama was back in third. Romantic Moment came first over just by the eighth pole and cleared the top by the quarter in :28.3. Romantic Moment was left unchallenged through a :56.3 (:28) half-mile.

Sarandon Blue Chip came first over from fifth rolling around the far turn. Big Mcdeal tracked her cover, but Sarandon Blue Chip proved to be dead cover. Romantic Moment was still on the lead at three-quarters in 1:24 (:27.2).

Romantic Moment ($2.40) is by American Ideal, out of the mare Time N Again by Jate Lobell. She is owned by Brittany Farms and trained by Jimmy Takter.

“I thought she was the best last week too, but sometimes in short fields, the easiest place to race is on the front. Last week, I tried that, but I ended up going through fast fractions and I was first over. She had plenty left into the stretch; I never even started her up,” said Gingras.

Economy Terror paced a pocket trip behind tempo-setter American Jewel to win the second division of the Tattersalls in 1:50.

Marty Party came first over at the half in :55.4 (:28.1). Shelliscape came second over and Moonlit Dragon was third over into the far turn.

Economy Terror ($13) is by Western Terror, out of the mare Mattatonic by Matts Scooter. She is owned by Chuck Pompey, Howard Taylor and Edwin Gold, trained by Chris Oakes and Dave Palone was in the bike.

Fool Me Once returned to The Red Mile after his Bluegrass victory to defeat public choice Rockin Amadeus in the first division of the International Stallion Stakes for two-year-old colt pacers in 1:51.3.

Modern Cruiser took the lead, with Muscle Beachboy in second and Rockin Amadeus in third. Rockin Amadeus came first over passed the eighth pole and cleared the top at the quarter in :26.4.

Fool Me Once and driver Ron Pierce came to the outside and challenged Rockin Amadeus for the lead at the three-eighths. He cleared the top at the half in :54.1 (:27.2).

Into the far turn, Fool Me Once was on top. Rockin Amadeus was in second and Modern Cruiser was third. Twilight Bonfire was progressing first over, supplying cover to Real Rocker and Clint Westwood. Fool Me Once was unchallenged at three-quarters in 1:24.1 (:30).

“I had to use him quite hard to get to the top, I gave him a better breather around the far turn and he fought game,” said Pierce.

After a controversial disqualification in the Bluegrass a week ago, Odds On Equuleus returned to the winner’s circle in the second division of the International Stallion Stakes in 1:50.

Dress The Part angled to the outside at the half-mile in :55 (:27.3). He applied pressure to Odds On Equuleus approaching three-quarters. Teresas Beach was tracking the live cover and Doctor Butch was locked at the pylons.

Odds On Equuleus ($3) is by Art Major, out of the mare Latte Lady by Jennas Beach Boy. He is owned by Odds On Racing, trained by Robin Schadt and John Campbell was in the bike.

Captaintreacherous made a quarter move to the lead and held off a stretch rally from Dedis Dragon to win the third division of the International Stallion Stakes in 1:50.3.

Good Day Mate was flushed out from fourth by Resistance Futile into the far turn. Resistance Futile drifted three-wide off cover and lost ground. Captaintreacherous was holding onto the lead at three-quarters in 1:23.1 (:27.4).

Captaintreacherous ($2.40) is by Somebeachsomewhere, out of the mare Worldly Treasure by Artsplace. He is owned by Brittany Farms, Marvin Katz and Joe Sbrocco, trained by Tony Alagna and Tim Tetrick was in the sulky.

After breaking in the Bluegrass last week, Apprentice Hanover got a perfect second over trip to win the International Stallion Stake in 1:50.3.

Urbanite Hanover was parked into the far turn. Apprentice Hanover was ready to fan three-wide and Sir Richard Z Tam needed room to pace. Johny Rock had a narrow lead at three-quarters in 1:22.4 (:27.2).

Apprentice Hanover ($4.20) is by Somebeachsomewhere, out of the mare Allamerican Nadia by Dragons Lair. He is owned by Bradley Grant, trained by Ben Wallace and Jody Jamieson was in the sulky.

After a season filled with losses against the top caliber of competition, Sweet Lou came back on top, winning the $510,300 Tattersalls Pace in 1:48.3.

Bolt The Duer made a brush to the lead approaching the three-eighths. Bettors Edge then came to the outside and Sweet Lou tracked him. Bettors Edge took the lead at the half in :52.4 (:27.2).

Into the far turn, Bettors Edge and Sweet Lou were duelling for the top. Hillbilly Hanover came off the cones and began to surge on the outside. Sweet Lou took a short lead at three-quarters in 1:20 (:27.1).

Sweet Lou ($8) is by Yankee Cruiser, out of the mare Sweet Future by Falcons Future. He is owned by Burke Racing Stable, Weaver Bruscemi, Larry Carr and Paul Collura, trained by Ron Burke and Dave Palone was in the bike.