Ramblinglily All Business At Truro

After having not recorded a victory since September 1, the Allan Jones-trained and Todd Trites-driven Ramblinglily ($2.60) got back to her winning ways Sunday (Oct. 28) at Truro Raceway, as the Post 1 starter notched a gate-to-wire, 1:59.1 victory in the $1,675 Winners-Over Pace. 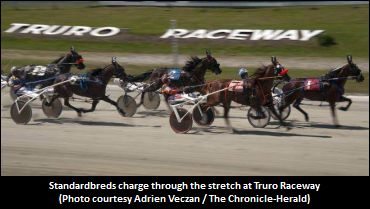 The eight-year-old Articulator mare charged straight for the lead, cut all the speed (:29.2, 1:01, 1:30.3) and recorded a three-length win over the ‘fast’ track that was rated two seconds slow.

After a Post 2 start, the Paul Langille-driven Rusty Riley paced a two-hole trip and finished second. The Darren Crowe-driven Good Friday Three, who had worked out a three-hole ride after a Post 8 start, finished almost nine lengths behind the victor.

After 22 starts this season, Ramblinglily has notched seven wins, six second-place finishes, four thirds, and has banked almost $16,000 for Jones, of Riverview, New Brunswick, who also bred the bay along with Normand Leger, Shediac, New Brunswick. The win marked the sixty-third of Ramblinglily’s career, one in which she has banked nearly $187,000 in purses.

George Rennison was the hot trainer during the eight-race program, as the conditioner recorded wins with Electric Syl ($4.00), Always Reese ($4.10) and Distinctiv Rusty ($4.10). Darren Crowe recorded a pair of training wins during the card. Todd Trites recorded a training triple.