Which Race Does Burke Want Most? 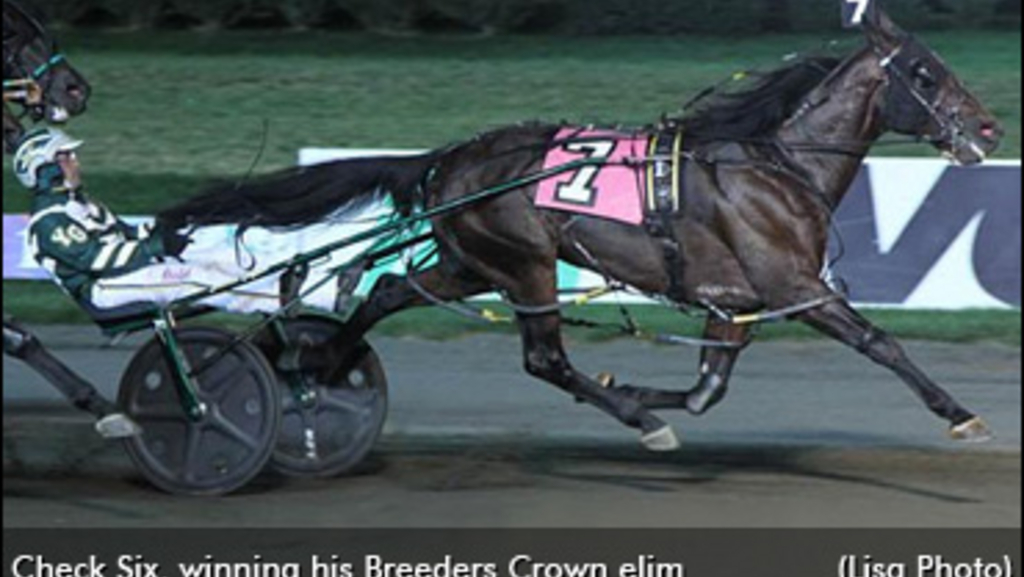 Ron Burke will send high-profile stars Hannelore Hanover and Southwind Frank into Breeders Crown action this weekend, but neither horse will be in the event the trainer considers the most important to his stable.

Burke, who has 17 horses spread throughout nine of the dozen Breeders Crown races at the Meadowlands, considers Saturday’s $500,000 final for three-year-old male pacers integral to a successful weekend. Burke has four horses in the event, led by one of last week’s elimination winners, Check Six.

Check Six, the Pennsylvania Sire Stakes champion, has won nine of 19 races this year and earned $801,415. The son of 2008 Breeders Crown champ and Horse of the Year Somebeachsomewhere, Check Six captured his elimination by 1-1/4 lengths in 1:50.3. He is joined in the final by stablemates Fine Diamond, Fernando Hanover, and Manhattan Beach.

“To me that’s the most important race for my barn,” said Burke, who has won nine Breeders Crown trophies in his career as a trainer and five as an owner. “We’ve got four of us in there; we need to do well out of that group. I think we can do good there. The horses all seem to be sharp.”

Check Six will start from post two. Western Fame, the other elimination winner, will leave from post one and Racing Hill, who finished fourth in Check Six’s elim but is a multiple-stakes-winner of $1.33 million this season, is in post five.

“I love his spot,” Burke said. “He was good. It’s just that once in a while he throws a dud in, and I’m just hoping it’s not this week. But I love his spot. It’s a huge spot for him. He has the chance to go over a million dollars. There are so many things he could do for himself and his career by putting in a good performance here.”

Fernando Hanover, who was second by a nose to Western Fame in his elimination, and third-place finisher Manhattan Beach drew posts eight and nine, respectively, in the 10-horse field. Fine Diamond, who was fifth in Check Six’s elim, will start from post four.

“The two who drew eight and nine have raced before very well from far back, it’s kind of been their style anyhow,” Burke said. “When there’s not a definite favorite, that’s usually when you see more action and movement, and that leads to you being able to race from the back.”

Joining Hannelore Hanover in the race from the Burke Stable is Classical Annie.

Hannelore Hanover has won 15 of 18 starts this year and earned $971,334. She heads to the Breeders Crown off a seventh-place finish against male rivals in the Oct. 15 Yonkers International Trot. She started from post one and went off stride in the first turn.

“That was her first start on a half-mile track and maybe the rail was the worst spot for her,” Burke said. “She kind of just didn’t make the turn. With the rail, you need to make a hard left and she just didn’t get it. It doesn’t bother me whatsoever. She trained great this week. She moves back to the Meadowlands, which she loves. I expect that she will race well.”

Southwind Frank is a returning Breeders Crown champion, having won the two-year-old male trot last year on his way to the division’s Dan Patch Award. This year Southwind Frank finished third in his elimination behind Sutton and Marion Marauder, but was beaten by only a head. Bar Hopping won the other elimination for Saturday’s $500,000 final.

A son of two-time Breeders Crown champion and 2009 Horse of the Year Muscle Hill, Southwind Frank has won six of 13 races this year and earned $1.06 million. He has been beaten by a neck or less in four races, including the Hambletonian and Kentucky Futurity, where he suffered a flat tire.

“We’re back to the drawing board on his gait a little bit, but usually in the final he gets it together and he should be good,” Burke said. “I have a good feeling about this week that we can have him ready to go. There are four horses -- him, Sutton, Marion Marauder and Bar Hopping -- that so far are a step above the other ones. We’ll see come this week. It’s a good group of trotters.

Burke sends three horses into Saturday’s $600,000 Breeders Crown for two-year-old male pacers -- Miso Fast, Normandy Beach, and Filibuster Hanover. Miso Fast finished second to Huntsville in his elimination and Normandy Beach was second to Downbytheseaside in his elim. Filibuster Hanover finished fifth in Downbytheseaside’s race, but Burke is hopeful the Somebeachsomewhere-sired colt can improve starting from post No. 1 in the final.

Filibuster Hanover, who is a half-brother to Fernando Hanover and whose family includes Breeders Crown champion Galleria, has won only two of 11 races this year but defeated Huntsville in one and Downbytheseaside in the other.

“I know he pulled one of his clown moves the other day trying to go out the third turn at the Meadowlands, but I like him,” Burke said, referring to Filibuster Hanover drifting wide around the final turn and falling back to last place before rallying to grab the last qualifying spot for the final. “But he’s now got the rail, where we can be very aggressive with him. He was very good at Lexington when we did that.

“That horse can pace with any horse I have. He’s a fast horse, he’s just very inconsistent. I’m just hoping this week he trends the right way. He’s in a great spot and I think he really could surprise.”

What The Hill, another son of Muscle Hill, finished second to world champion Walner in his elimination for the two-year-old male trot, but has enjoyed success at the Meadowlands, winning this year’s New Jersey Sire Stakes championship and Peter Haughton Memorial there.

“He was super last week,” Burke said. “He came back to the Meadowlands and it seems to be his track. He really likes it. I know Walner, everyone thinks it’s a given, but our horse can trot. If we get away in the right spot we’ll at least make it a race.”

Joining What The Hill in the race from the Burke Stable is Snowstorm Hanover, who finished fifth in his elimination, which was won by Sortie.

In the Mare Pace, Burke has Sassa Hanover and Skippin By. The four-year-old Rock N Roll Heaven-sired Sassa Hanover has four wins in 22 races this season, but two of the victories came in her last three starts. Lady Shadow is the 8-5 morning line favourite.

“She was super last week and trained out of her mind,” Burke said about Sassa Hanover, who has earned $1.06 million in her career. “She’s finally starting to show what we thought too. Maybe she just had the four-year-old blues. I do have a good feeling about her. She really is coming back around.