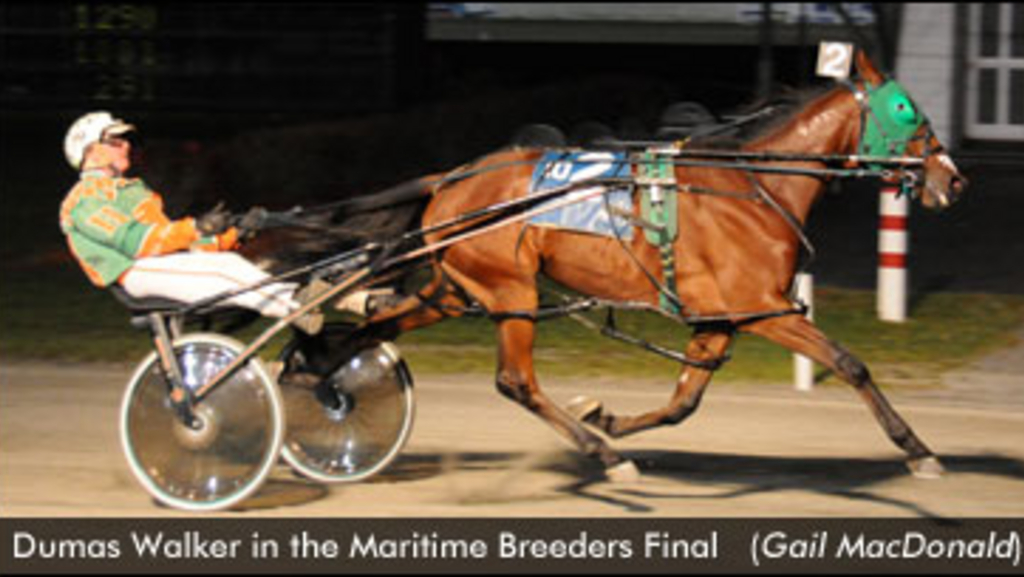 Dumas Walker romped to a 1:57.4 triumph in the $33,000 final for colts and geldings while Saulsbrook Alana took the filly title with a 1:57 score in that $29,200 event. Both were favourites after winning their respective Atlantic Breeders Crown championships and Maritime Breeders eliminations in previous weeks.

Trainer and co-owner Myles Heffernan sent Dumas Walker to the lead from post two in the colt final and carved out fractions of :29.1, 1:00.1 and 1:29 while turning back first over attacker Tobins Fusion (Gilles Barrieau). Dumas Walker then opened up a pair of lengths on the field into the stretch to secure the victory. Settlement Request (Marc Campbell) overtook pocket-sitter Mr Comraderie (Mike Stevenson) for the runner-up honours. 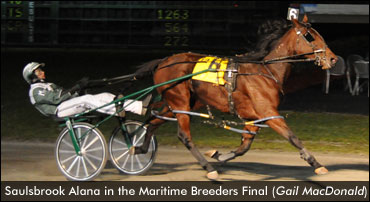 With Marc Campbell in the sulky for trainer Kevin MacLean, Saulsbrook Alana powered up from the backfield after the :27.2 opening quarter to take the lead. She reached the half in :56.4 and continued to lead the fillies to three-quarters in 1:26.3 with Elm Grove Inarush (Mark Bradley) pulling the pocket. However, Saulsbrook Alana kept her nearest rival at bay down the stretch to win by two lengths. Absolootly Hot (Brodie MacPhee) followed 10 lengths behind in third.

The Louis McIsaac Memorial Series for $5,000 claimers continued on Saturday with a pair of $1,500 second leg divisions going to Albert Gamble and Glenda Chappell's three-year-old colt Brand Of My Own (John Holmes) in 1:59.1 for trainer Thane Mann and sophomore filly Modern Girl (Mike Stevenson) in 2:01.2 for trainer/owner Elton Miller.

The streaking later All Turain overcame his assigned outside post six in the $2,400 Preferred Pace and posted the fastest mile of the night in 1:55.1. The four-year-old gelding romped to the five and three-quarter length victory, his seventh in a row, with Brodie MacPhee aboard. Trainer Trevor Hicken co-owns the winner with fellow Islander Lee Hicken.

Fresh off an 1:55.3 track record performance at Exhibition Park Raceway, Dirt Track Momma won the $2,200 Fillies & Mares Open Pace and came within just one-fifth of a second of that clocking for Marc Campbell and trainer/owner Jonah Moase. The victory was her 18th of the season and leaves her in a three-way tie for third behind Haroun Hanover (20 wins) and Tracys Song (21 wins) for the most wins in North America this year.