Four previous champions will be in action this Friday, as the road to this year’s Breeders Crown finals will begin with eliminations for female trotters and pacers at Hoosier Park Racing & Casino.

Eliminations for male and open trotters and pacers will be contested Saturday. To view the draw results for the male elims, click here.Racing begins at 6:30 p.m. (EDT) both nights. 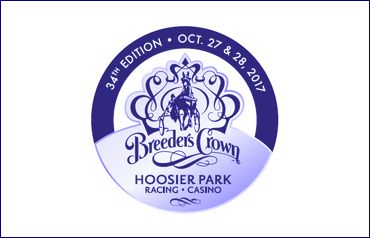 All of the divisions for female trotters and pacers require eliminations with the exception of the $250,000 Mare Trot. That race attracted five horses, which are, in alphabetical order: Caprice Hill, Emoticon Hanover, Flowers N Songs, Pasithea Face S, and Pink Pistol. All five will advance directly to the Oct. 27 final. The draw for the Mare Trot will be held this weekend.

Hannelore Hanover, who won last year’s Mare Trot, was entered in this year’s Open Trot against the boys.

The $250,000 Mare Pace received 13 entrants, including past Breeders Crown winners Call Me Queen Be, Lady Shadow, and Pure Country. The top five finishers from two eliminations will advance to the final.

Lady Shadow won last year’s Mare Pace and Call Me Queen Be was last season’s three-year-old champion. Pure Country won her ‘Crown’ in 2015 as a two-year-old. Shelliscape was the most recent horse to win consecutive Mare Pace titles, in 2013 and 2014. No three-year-old filly pacing champion has ever returned to capture a Crown at four.

Another returning champion, Ariana G, leads a group of 11 in the $500,000 Breeders Crown event for three-year-old female trotters. Twelve horses are needed to split a division into two eliminations, so Ariana G and Thats All Moni received byes to the final based on seasonal earnings. The remaining nine horses will compete for eight spots in the final.

Ariana G, the No. 2-ranked horse in this week’s Hambletonian Society/Breeders Crown poll, has won 11 of 14 races this season and earned $873,690. She is trained by Jimmy Takter, who has won a record 30 Breeders Crown finals. Takter also trains Thats All Moni, who has won four of 12 races and earned $238,141.

The elimination field for the three-year-old female trotters includes Kentucky Filly Futurity winner Ice Attraction, who defeated Ariana G by a neck in the October 8 race. The three finishers to follow Ice Attraction and Ariana G – Dream Together, Dream Baby Dream and Sunshine Delight – also are in the elimination.

The $500,000 Breeders Crown for three-year-old female pacers also got a field of 11. New York Sire Stakes champion Obvious Blue Chip and Lismore Pace winner Tequila Monday received byes to the final after the connections of the group’s top money-earners, Caviart Ally and Agent Q, elected to race in the elimination.

Caviart Ally has won six of her last 10 races and finished no worse than second during that span. Her victories include the Jugette and Pennsylvania Sire Stakes championship. Agent Q, who lost to Someomensomewhere by a nose in last year’s Breeders Crown, has finished off the board only twice in 23 career races, winning 11.

Agent Q has raced only once since September 13, a win on October 12 in the Circle City at Hoosier Park.

“This is the way we had it set up,” Agent Q’s trainer Aaron Lambert said. “It was the plan all along to race these three weeks. Plus if you win the elimination you can’t draw outside. We skipped (the Red Mile meet) on purpose to try to get it done out here.”

Stakes winners Percy Bluechip, Rainbow Room and Youaremycandygirl are among the 16 horses entered in the $600,000 Breeders Crown for two-year-old female pacers. That trio has combined to win 16 of 24 races and $1.01 million.

Following are the fields for Friday’s eliminations with named drivers and trainers.