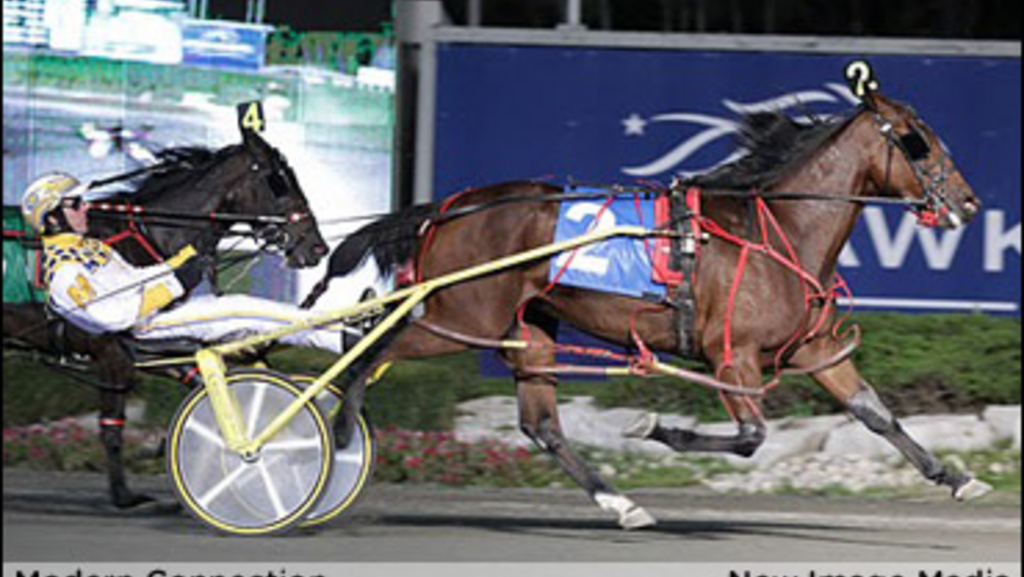 The top two freshmen pacing filly division leaders in the Ontario Sires Stakes Gold Series were both defeated in their respective $40,000 eliminations early Friday night at Mohawk Racetrack as Imagine Semalu and Modern Connection pulled off a pair of mild upsets

Imagine Semalu and driver Mario Baillargeon made a quarter pole move and cruised to a career-best 1:54.2 victory in the first elimination for trainer Pierre Touchette.

Village Janus (Mark MacDonald) put up the opening quarter of :28.2 before Imagine Semalu pulled the pocket and took control. The homebred Life Sign-Verge Dor Semalu filly, currently ranked 12th in the OSS divisional standings, proceeded to the half in :57 and three-quarters in 1:25.3 before opening up four lengths in the stretch to secure her second win in 13 seasonal starts.

Heavy favourite Monkey On My Wheel, a former Gold champion at Mohawk who is ranked second in the OSS standings, with driver Rick Zeron closed well from the backfield to place, finishing one and three-quarter lengths behind the winner. Stonebridge Damsel and Jack Moiseyev finished seven and three-quarter lengths back in third. Bunkhouse Babe (Randy Waples) and Village Janus also advanced to the final with their fourth and fifth-place finishes.

Imagine Semalu paid $12.90 to win at the 5-1 second choice. The lion’s share of the purse pushed her bankroll to over $57,000 for Semalu Inc. and the Zoom And Fish Stable Inc. of Laval, Que.

Divisional leader Lauren, fresh off a Gold Final victory at Kawartha Downs on Oct. 9, was defeated in the second elimination by 2-1 second choice Modern Connection and driver Mark MacDonald.

Leaving from Post 4, Lauren (Steve Condren) fired to command and carved out fractions of :28, :56.3 and 1:25.4 with Modern Connection following in the two-hole and Tanned For Life (Jack Moiseyev) advancing first up. After Tanned For Life made a costly break as the field moved into the stretch, Modern Connection, who is currently ranked third in the OSS standings, pulled the pocket and scooted past the pacesetter to score in 1:53.3 by one and a quarter lengths.

Modern Connection returned $6.90 to her backers. The Modern Art-Cambest Connection filly, who is trained by Joe Seekman, has won four times in 10 outings this season including an OSS Gold Final on July 12 at Grand River Raceway and the Champlain Stakes in Sept. 11 at Mohawk. Her earnings climbed to $232,797 for co-owners Yousif Yousif of Chesterfield and Ameer Najor of Detroit, Michigan.

Here is a look at the field for next weekend's $130,000 OSS Gold Final at Woodbine Racetrack, the last event for the freshmen fillies before the Super Final on Nov. 13: