The world’s fastest pacer, Always B Miki, who recently reset the time standard in harness racing to 1:46, leads a group of 39 eligible pacers for the $400,000 Breeders Crown Pace, slated for Friday, Oct. 28, at the Meadowlands Racetrack. 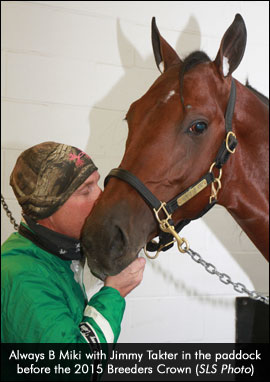 Also eligible is the sensational Shamballa, who was just one and one-quarter lengths back of Always B Miki in that historic 1:46 mile, and also defeated both divisional leaders Always B Miki and Wiggle It Jiggleit in a 1:47.1 score in the U.S. Pacing Championship at the Meadowlands on Hambletonian Day, August 6. Shamballa is driven by the red-hot Scott Zeron, who is having a career year at age 27, having just won the Triple Crown of Trotting with Marion Marauder. Zeron has more than $800,000 in Crown earnings though he is still seeking his first title.

One of four Breeders Crown events slated for the Meadowlands on Friday, Oct. 28, the Crown Pace will be featured in a one-hour live broadcast on SNY (SportsNet New York) from 9-10 p.m. (EDT).

The battle for division supremacy may very well come down to the Breeders Crown, as 2015 U.S. Horse of the Year Wiggle It Jiggleit is not eligible to the program, which has stallion eligibility as its cornerstone.

Horses eligible to the Breeders Crown events must enter by 9 a.m. on Tuesday, Oct. 18, also at the Meadowlands race office.

Elimination events, if necessary, will be raced on Friday, Oct. 21.

A complete listing of all eligibles to the 12 events and more information on the conditions of the race can be found at hambletonian.com.

(With files from Breeders Crown)