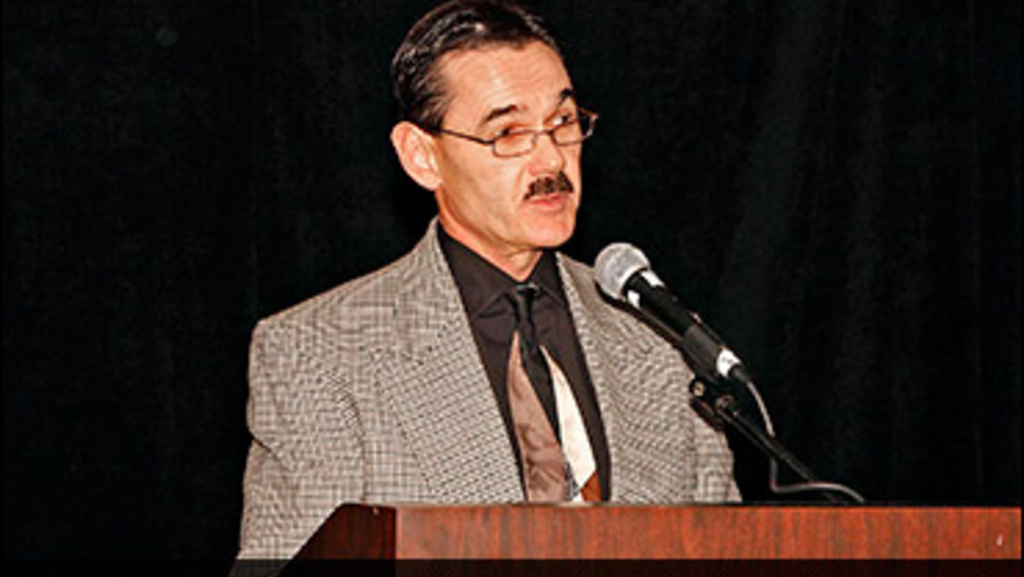 While the harness racing industry in Ohio is experiencing a renaissance due to the addition of slots and expanded gaming at the state's racetracks, Hall of Famer and Grand Circuit President John Campbell took time on Monday night to stress the importance of properly maintaining political allegiances, promoting the on-track product and ensuring the state's signature race -- the Little Brown Jug -- is still considered by the industry to be an elite event.

Campbell and fellow Harness Racing HOFer Roger Huston were the co-Masters of Ceremonies on Monday for the Ohio Harness Horsemen’s Association annual awards banquet. Over 300 horsemen and guests were in attendance at the Columbus Marriott Northwest to take in the sage advice of Campbell, who expressed how happy he was to see Ohio experience this resurgence in business.

“I’m so happy that Ohio is now on the track to success after the bleakness it suffered for so many years,” said Campbell, who also acknowledged the accomplishments of fellow horsemen David Miller and the late Sam “Chip” Noble, III.

Campbell cited political alliances as paramount to ensuring success in the future for the Ohio racing industry.

“Political alliances must be massaged and maintained,” Campbell said. “As horsemen, you must constantly court political favour. (Ohio State Racing Chairman) Bob (Robert) Schmidt is to be commended for his commitment and passion into making the Ohio racing industry the best in the nation.”

USTA and OHHA Director Dick Brandt Jr. mirrored Campbell’s comments, adding that, “the OHHA and our industry is lucky to have the support of the USTA, and to have the USTA headquartered in the Buckeye State.”

Campbell told the audience that ‘sooner, rather than later,’ should be the attitude of the Ohio horse racing industry.

“As horsemen, we can’t take this phase, this new influx of money, without promoting the product,” Campbell said. “The gaming companies aren’t going to promote horse racing -- they’ve got their hands full promoting their own product. So we need to do that. Our number one priority should be presenting a product that is competitive and exciting and one that offers multiple betting options.

“And that carries on over to the Little Brown Jug,” Campbell added. “Ideally, we need to increase the Jug purse to one million or $1.5 million. With that kind of purse, it’s going to be pretty difficult for people outside of racing or the media to ignore this race. There needs to be passion created for the Delaware racing experience -- the entire sport needs for the Jug to be a marquee event of the harness racing.

“This business is built on hopes and dreams,” Campbell concluded. “We all hear the stories among each other. Trainers asking why a guy with one or two horses does it, and how does he come to the barn every morning when he only has cheap horses. I don’t know how he does it, but I know why he does it. He does it because he’s hoping and dreaming that the next horse that comes along will change his life. That the next great horse might just come his way.

During the evening, a silent auction to benefit the family of Chip Noble raised more than $15,000. Divisional winners were feted, and the three-year-old trotter Final Breath was named Ohio Horse of the Year as well as Sophomore Trotter of the Year for 2013. Dick Stillings was inducted in the Ohio Harness Racing Hall of Fame, while Virgil Morgan Jr. and Brian Brown were both honoured for their training accomplishments in 2013.

Hear, Hear and thank you very

Hear, Hear and thank you very much Mr. Campbell. We hope Ohio heeds the warning and we are confident they will. The infrastructure is largely in place; and by that I mean the human infrastructure of horsemen and women who have valuable experience in knowing how bad it can get. There is a much better than even chance they will prevail. Salt Hill

Great comments from a great

Great comments from a great man. He gets it and should be commended for laying the groundwork to move forward into the future in Ohio which will now become a worldclass circuit after years of racing for small purses. My only hope is the little guys who have barely scraped a living, can reap the rewards from it. Big business (large stables) usually comes a knocking, when there is money to be made.