MacDonald Better Than Ever 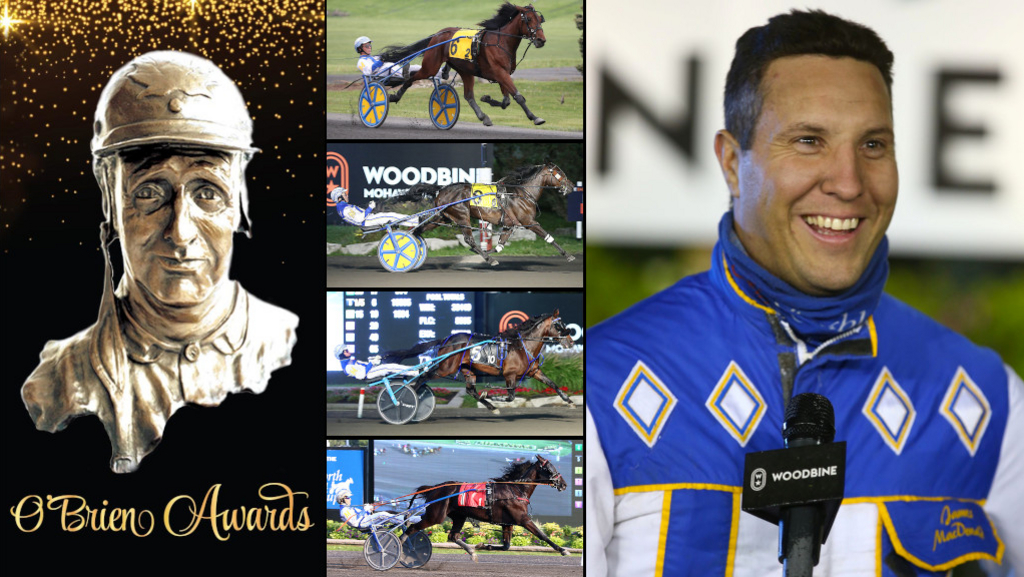 The Keith Waples Driver of the Year in 2021, MacDonald was Canada's top driver with 304 wins and $7.1 million in purses on Canadian soil during his award-winning season. The Guelph, Ont. resident captured his first O'Brien Award at the age of 36, but he was 35 years of age during for the majority of that 2021 season.

According to fellow 2022 finalist Doug McNair, MacDonald even predicted that success...to an extent.

But as good as MacDonald was at 35, like a fine wine he seems to be getting better with age. His 2022 season far exceeded his 2021 totals. Not bad for a guy who's apparently past his prime.

MacDonald admitted he might have to revisit his earlier statements.

In addition to leading all Canadian drivers in wins (450) and earnings ($9.8 million) during his career season, he added a second consecutive Lampman Cup as the leading driver in the Ontario Sires Stakes program.

"The goal going into 2022 was just to try and be consistent. Try and show up every night with a good attitude, try and do the best you can and try not to take too many nights off," noted MacDonald. "It's tough to get up for every race card and be your best every night. But I think that's the goal and I was able to just keep having one good night after another and then it just carried on to the next night and [you] just keep banging away. I never got in any big slumps; I was able to stay consistent, and it just ended up being a really special year again."

Other accomplishments for MacDonald in 2022 included winning the inaugural Charles Juravinski Memorial Cup at Flamboro Downs with Linedrive Hanover in a Canadian-record time and becoming just the fifth driver to win 400 races in a single season on the Woodbine Entertainment circuit. He also enjoyed a memorable night at Woodbine Mohawk Park which saw him win eight races on a card — a new WEG/OJC record.

"Obviously the eight-win night was really special. Ever since I started driving at Mohawk, anytime anyone's had a good night we've talked about Chris Christoforou’s seven-win night. We all thought there were a couple of people that did it. Maybe there was, I'm not sure. I always had a couple of big nights where I won five or six and I was like ‘...if I could have just got this one across, I could have got to that number seven.’ And seven seemed to be that number anyone always talked about. So never in a million years did I dream I would get eight.

"I was closing in on seven that night and I remember thinking I had a big shot in the last and I had Locatelli in the ninth, and I was like ‘Locatelli could upset and get me to seven.’ That's when I kind of started thinking ‘well, maybe eight would be possible.’ But if he finished second or third I'll be really happy. And of course, just the way the cards fell that night, he found a way to win and then the last one, he got the job done as well. So that was a night I'll never forget, for sure."

Macdonald also managed a fair amount of star power during the 2022 season as the regular driver for four O’Brien Award finalists -- Ace Of Aces, So Much More, Adare Castle and Twin B Archie, while also steering Tattoo Artist in all of that finalist's Canadian assignments.

"You need horses like that to have a year like I had," said MacDonald. "Obviously, a terrific year with Adare Castle, So Much More, Twin B Archie, Tattoo Artist...like just such great animals. It makes your job a lot of fun when you go to the track at night knowing you have one of those horses to drive."

While the opportunities to drive some of harness racing's top horses are more plentiful than they were when MacDonald was a not-yet-at-his-prime 35-year-old or younger, there are some connections that have continued to have faith in the blue, white and yellow-clad reinsman and some of those stables will be able to celebrate with MacDonald in person at the O'Briens next month.

"There's just a ton of people...I wouldn't have gotten to where I am today if it wasn't for Mark & Shawn Steacy. They've helped me out a lot over the years; they’ve been huge contributors to my success and always gave me great horses to drive year after year. Obviously, the last couple of years, Nick Gallucci – we've had a great run together, a great couple of years. Carmen Auciello, I've always done well with him throughout the years and always had lots of live drives from him. He's helped out a lot.  Obviously, my brother [Anthony MacDonald], his stable the last few years. And for everything that he taught me and helped me get to where I am today. They're huge contributors. As far as farms and stables go, I mean, I could go on all day."

Currently enjoying a well-earned vacation away from the racetrack, MacDonald will be back in time for the 2022 O'Brien Award Gala on Saturday, Feb. 4 at the Hilton Meadowvale / Mississauga. It's a night he wouldn't dream of missing as he looks to repeat as Canada's Driver of the Year.

"I'm really looking forward to it. We're going to have a big, big turnout of family and friends and it's just going to be a great night. I’ve been there before, but there's nothing like the O'Brien Awards and it's such a great, great time to celebrate all the tremendous years everyone had...but it's also a great party and a lot of fun as well."