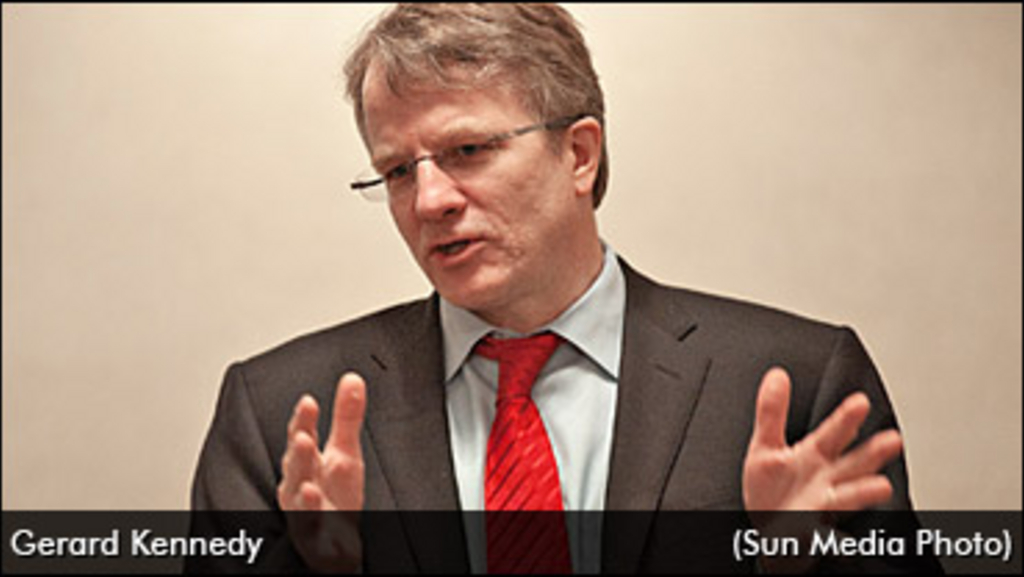 "I want to tell you that we're prepared, and I'm prepared, to make sure that every region in the province is served before we make those kind of decisions."

With the Ontario Liberal Leadership Convention less than two weeks away, Gerard Kennedy has released a statement on how he will reconnect with rural Ontario.

Many Ontarians have criticized the Liberal Party as being out of touch with the province outside of the GTA, with Kennedy citing the ways in which the Liberals handled the Green Energy Act and the Ontario horse racing industry.

While he doesn't come right out and state he will review the slots-at-racetracks decision with respect to the OLG modernization strategy, Kennedy says that under his leadership the Liberals will "review the things that we've done in order to earn back the necessary respect from you so we can move this whole province forward."

His full statement was released to YouTube on Friday, and is available below.

The leadership convention runs from January 25-27 at Ryerson's Mattamy Athletic Centre at Maple Leaf Gardens in Toronto, Ont. Earlier this week, some of the nation's top drivers urged Ontario horse racing to show support for the industry as the Liberals elect their successor to Dalton McGuinty.

TO LITTLE TO LATE Mr

TO LITTLE TO LATE Mr Kennedy...... If all these candidates are serious about readdressing the issues I beg to ask the question where were they when the ball was dropped.....Towing the party line??? nothing has changed cause nothing is being proposed talk talk talk.
Today a multi million dollar deal has been done with China in the milk producing sector and the Premier is presenting himself as the saviour of rural Ontario in China. When you read the fine print all the first 240 jobs will be outsourced to forgein workers. Some things will never change unless we change them.

In reply to Big fan of Canadian racing, I by DBShenCHI

One just needs to look at the

One just needs to look at the current economic state of this Province and make a decision on whom he should vote for. The liberals not only caused carnage to our industry but to the province as a whole.
One important lesson from this Liberal occupation is to exercise your democratic right to vote. Voter turnout at the last election was at an all time low of 49%. I think that I can safely say, judging by the dissatisfaction of the people of Ontario with the liberals, that voter turnout will be an all time high for the next election that can't come soon enough.

Big fan of Canadian racing, I

Big fan of Canadian racing, I live overseas and have been in some very hard core countries, that dont allow groups or organizations to have rights on any matters and risk persecution for attempting to just show a sign of unity to a problem that is unjust, but from time to time an issue does come up, that concerns either the welfare or livelihood of these people, that brings out the largest amount of people under one umbrella to address an issue and places their views center stage ,that stops the city, so that anyone in the city listens ,absorbs, and places an opinion on the matter.

I don’t think the horse people in Ontario have yet to unit under that one umbrella, as if it is a crucial time of their life and that, peoples livelihood are and will be in turmoil, if something does not change. Every time I come back to Canada, I see such a unity within the game and the respect that the horse people give one another while working, but have yet to see that unity within the community as one with the massive numbers it should bring to the table that does shut down a city or location for a moment so people have to listen and take notice. Yes rallies have been shown in the media, but just about every time it’s also noted not enough people attended.

Maybe the problem is you're acting too much as being in status quo and people don’t see the big picture of what can happen down the road overnight. Maybe to show a sign of good faith means to sacrifice some race dates now, so all can gather under one umbrella to donate some time and form a brotherhood to gather as one, far more than what is shown to date and shut down specific target areas in numbers and support a great industry and your livelihood that will be in turmoil.

You have some very powerful people in this industry and by bringing those people under one umbrella and placing structure behind it and getting 15-25,000 people in attendance , would make a difference and with those numbers politicians will not just tip toe around an issue, but will embrace it, like Mr. Darling has noted.

I am not sure why any

I am not sure why any horseperson would vote for a liberal. The few (and there were few)liberal members that listened to us and those that did apparently hold no weight with the party. I don't want them in office. This gentleman is no different. Where was he when this all transpired? It's amazing what you will say or do if you feel like you may lose your job. I am a little sick of the liberal parties "READY-FIRE-AIM" way of handling issues. I will not base my vote on what you will do for me, but what you did to me. Congratulations Mr. Kennedy on your free political public statement about nothing.

In reply to This kind of political-speak by jack darling

Jack you are right on the

Jack you are right on the money. I can only speak for myself but I am really sick of the Liberals with their READY FIRE AIM mentality.

Once they have your vote and

Once they have your vote and are in power, all provmises are null and void. They just blame the government before them for getting the province into such a mess that they can't follow through on pre-elections promises/crap. It will be interesting to see how the winner of this leadership converntion works that angle out seeing as everyone but Kennedy (Pupatello might as well be included as part of the McGuinty rule)was a puppet to McGuinty/Godfrey. To be honest, the voters deserve what they get because their complacency doesn't make their government accountable.

Ontario Horsepeople we need to research these 6 candidates to know which one offers horse racing a future, I'm not saying that you need to vote for a Liberal in the next election BUT we need to get a working leader ASAP for HORSERACING.
Please do the research, share the info,get a voice in this Liberal government because read behind the lines people the Liberals do not intend on calling a snap election we could be stuck with them for 3 more years that is a very real possibility - so can someone tell me which one should be their new leader. Who among them supports horse racing completely, answer NONE so get the best of the worst and get some support, none of the political parties will guarantee the replacement of the SARP but we need to make it loud and clear that we need this as a direct stipulation of support Our support only goes to the party that states openly that they will reinstate the SARP Contract and guarantee us that there will be a similar contract that supports horse racing on equitable solutions in small talk BE FAIR and acknowledge the 1.2 Billion we have contributed back to resources for gov't spending as a positive contribution of holding up our end and then show us ways to make that even better so that average Ontario residents regain respect for our industry,and returns to our tracks for both great horse racing and to play our slots that actually give back to the people of Ontario.

Mr. Kennedy would be the only

Mr. Kennedy would be the only one I would consider IF there were only Liberals to vote for, but thankfully we have a choice. None of the people running for leadership has demonstrated anything but contempt and disdain for rural Ontario, and deserve nothing but that in return. They can talk all they want about looking after all of Ontario, but once they get elected, they can turn their backs once again. With the number of huge issues facing the province, eg: wind turbines, gas plants, ORNGE, teacher strikes, they will have too much mess to clean up to actually do anything for any segment of the rural community.

I agree completely with Mr.

I agree completely with Mr. Darling. Poli-speak is only obfuscation. Surely by this time horsemen/women are familiar enough with it, not to be suckered again.
You must learn to play the political game the way the pols do. A massive presence at the convention, with a planned strategic approach to every voting bloc there, by people from the various regions is your answer. Show them racing's power in Ontario by grabbing them by the you-know-what's. Their hearts and minds will surely follow. With most politicians you'll find that self-interest and greed is their only motivation, though they'll mouth all kinds of other platitudes. This crowd is no different. A demonstration of racing's power is what's needed - not going to them on bended knee to kiss their rings. You need to threaten their ability to retain power. That they'll understand!

Before Anybody goes throwing

Before Anybody goes throwing their support behind any of these Liberal leader candidates, it would be prudent to see how they voted on the OLG "Modernization" plan.
Not ONE political politician has stated Anywhere that they support SARP as it is. Not one.

This kind of political-speak where they dance around the issues and don't really say anything or commit to anything is no good to us. We need someone who really understands our issue and will speak to it directly. We need a commitment of support and at least a general idea of what they will do for horse racing in Ontario.