Is He Better Than 'Beach'? 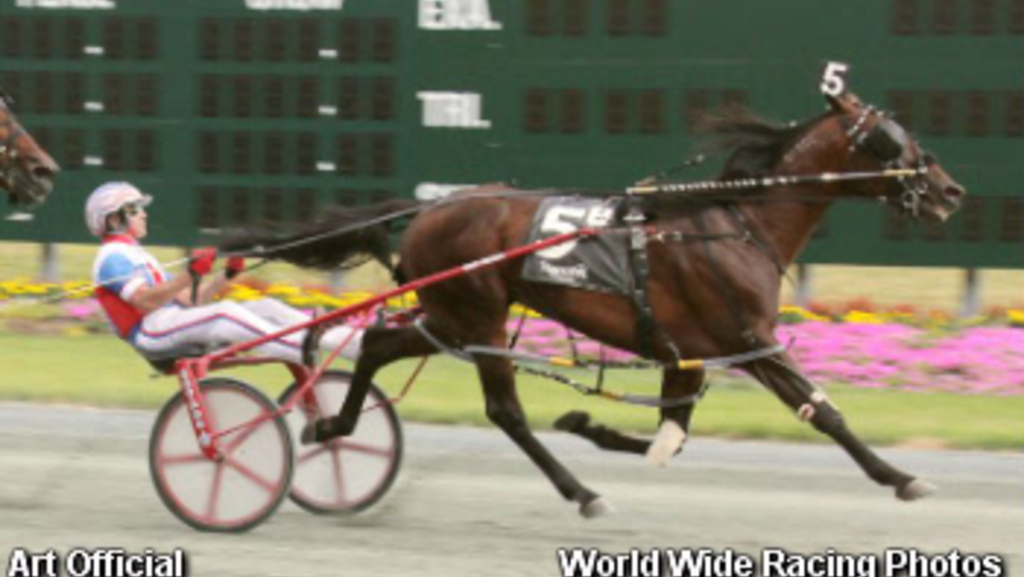 The owner of pacing powerhouse Art Official, who heads into this Sunday's Ben Franklin final at Harrah's Chester as the 3-1 second choice, has gone on the record stating that his pacer was better than 2008 Horse of the Year Somebeachsomewhere

"It has to be a sensible offer because he is one of the world's best pacers. He's better than good. Nearly everyone says that Somebeachsomewhere was the best racehorse in North America, but I honestly believe my colt was better. We proved that in last year's Meadowlands Pace. Just wait until the end of this Stakes season and you will see just how good he really is."

Trained by Joe Seekman, Art Official is 2-for-5 to start his four-year-old campaign against one of the deepest open pacing divisions in the history of the sport. The pacer will leave from post 4 in Sunday's $500,000 Franklin final and was a wire-to-wire 1:49.2 elimination winner last Sunday.

Ralph says it very clearly, but to put it in laymans terms, comparing Somebeachsomewhere and Art Official is like comparing Niatross to Bruce Gimble and Trenton Time. All very nice horses, but you have to beat the best more than once to say you're the best. Remember, " Every dog has his day".

Only once did he have the

Only once did he have the steam to beat the BEACH. There is no way in Hades that Art Official is better than the BEACH. After he won by a neck at the Meadowlands, he didn't even have the courage to race the BEACH again -- guess he was too scared that he would lose. He couldn't even repeat his performance of 1:47 again -- so what does that tell anyone. The BEACH went on to race in 1:46.4 later the same year

well i hope youre right but

Mister Big was first-up against a :53.4 half in (his own) world record-equaling mile. Maybe Art Official can make second best THIS YEAR??

And lets not forget Mr.

Both have horses to be proud

Both have horses to be proud off, Bet everyone on here would like to owe either one

Mr. Jest, sir, you must be auditioning for comedian of the year award when you state that Art Official is better that "the Beach". I submit that if the "Beach" had not been parked as long as he was, he would have won by open lenghts. While your horse is a nice horse, he is not in the same class as the "Beach". However, having said that I wonder if we have another horse that could be in the same class as the "Beach" in Well Said. Time will tell.

Since SBSW is retired Art

Since SBSW is retired Art Official may be the best horse now. Time and racing will tell.
Those are some big shoes to fill!

Art Official raced 15 times at two - and couldn't break his maiden! Not at Balmoral, or at Hawthorn, Mohawk, Du Quoin, Indiana, Indianapolis, Lexington or the Meadowlands.

Hello - that was 12 lengths FASTER than he'd ever paced? 16 lengths better than his lifetime mark? 8 lengths faster than he's gone in 15 races since? In 2009, he couldn't even stay unbeaten in the Midwest!! In 5 starts, he's been 3rd to Mr Big (Hoosier); passed in the lane by Won The West (Meadowlands); and 4th in the Haughton.

And this guy has the audacity to suggest his horse is better than SBSW? Probably Shadow Play was second best. Art Official? Nice horse. GREAT buy as a $10,000 yearling. Shocking lifetime mark (the only time he paced faster than 1:48.3). But his only claim to fame is that one night in New Jersey, he put together the unthinkable performance required to beat SBSW.

Lots of people are still in wonder at that.

Art Official is certainly a

Art Official is certainly a nice horse, but he is not in the same league as Somebeachsomewhere. Well Said on the other hand.........may be better.

Art Offical had his 15

Art Offical had his 15 minutes of fame in the Meadowlands pace but where was he the rest of the year seems like they were avoiding The Beach...

In reply to 'WELL SAID' by cookster

That's like comparing apples and oranges.... Somebeachsomewhere is great what has Art Offical done... hmmmmmm didn't see him win the Jug.... You stayed away from the Beach a very wise move on your part

OMG....sure you are proud of

OMG....sure you are proud of having the best horse. That is the best horse second to ONE!!!
SBSW lost by inches on a mistimes move by PMac,53.4? to the half...or less. Honestly can't remember. He was out driven that night,
If PMac waits he wins handily and is UNDEFEATED.
Can we all get some of what you are drinking.
I am sure you think Joan Rivers is hot too.

better than SOMEBEACHSOMEWHERE , no way , art offical is a great horse the beach possible one of the greatest horses ever !!!!!!!!!!!!!!!

I wonder how many trainers

I wonder how many trainers would pick Art Official over the Beach? There are many who believe that SOMEBEACHSOMEWHERE can be counted among the greatest pacers in history and I for one have never heard a single person suggest that about Art Official . There was also controversy around Art Official and his trainer in Lexington and that certainly cannot be said about the Beach or his trainer. I think this owner has his heart in the right place but his head is somewhere else entirely.

I really believe Jimmy boy should stick to looking pretty and paying the bills. Comments like that make a person look real foolish and unaware.

Apparently the squirrels didn't find all of the nuts this past winter.

I was looking for the Joke

Well mister Jesk,it's nice that your proud of your horse, as you should be, but maybe you should check the racelines before you give interviews.In the 2007 and 2008 seasons, Somebeachsomewhere never finished off the board in any of his 21 races.

Using your theory that Art Official beat Somebeachsomewhere in one race, so he should be classed as the best horse. Shadow Play, Dali, Mucho Sleazy, should all be ranked above Art Official, they all finished ahead of him in races. Art Official is and will be a great horse, but I suspect his connections might embarrass him a tad.

You have got to be kidding

You have got to be kidding me. Better than the "Beach". This guy is drinking his bath water if he thinks for one minute that Art Official was a better three-year-old than "Beach". Beach went the toughest trip I have witnessed a horse go and was just a head away at the end. Turn the tables and give Art O that trip and see where he would have ended up. If anyone is even in the same breath as "Beach" it would be Well Said.

When I saw the headline for

When I saw the headline for this story on the homepage I assumed the horse in question was Well Said, but Art Official better than Somebeach?? Don't make me laugh.

Well Said on the other hand may prove to be right up there with the Monster from the Maritimes. And hey, even if he's not - it's gonna be a lot of fun finding out!

ALL DUE RESPECT. But that

ALL DUE RESPECT. But that comparison is a little like taking credit for being the best hockey player....in Equador!!!

Art Official's claim to fame is that on one given night he was able to beat the best pacer we had seen to that point. Is Art Official the best? Is it Somebeachsomewhere?
Make room for Well Said in this conversation also. All this just helps to grow the sport of Harness Racing. I love it!

He is a nice horse....but he is no where near the Beach,an yes he did beat the beach in the Meadowlands pace but i think it is fair to say that he got sucked along,

I would say that too if i

I would say that too if i owned him and was trying to sell him for big money.If my memory serves me correct,Ron pierce pretty nearly took the legs out from under somebeachsomewhere on the first turn in that race . Paul had to take him up a bit when he was rolling full speed .Art official is a nice horse and i would like to own him but he is just a notch below somebeachsomewhere.

Mr. Jesk, surely you jest! I