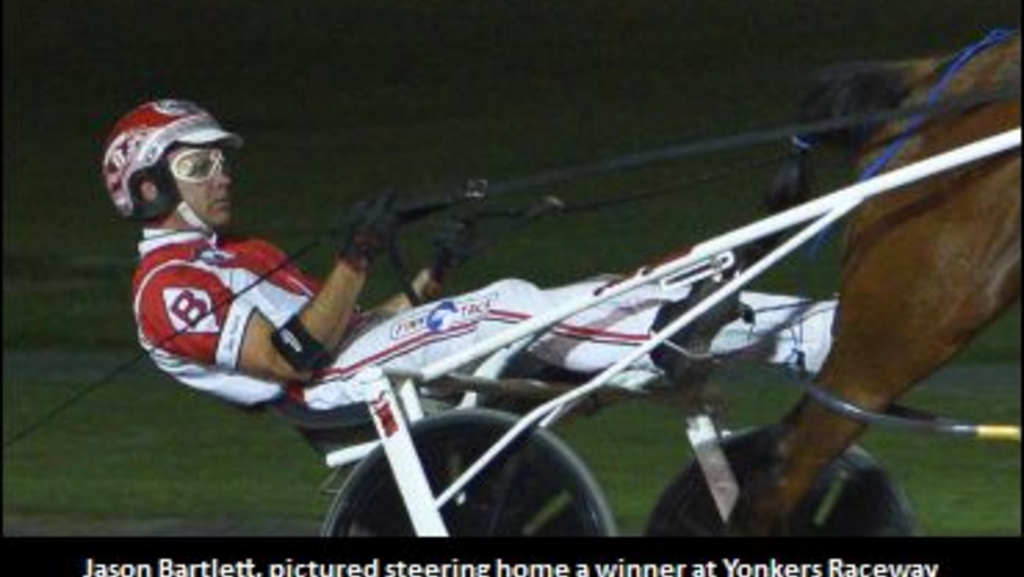 By the time December comes around, the driving and training titles at Yonkers Raceway are usually sewn up. There is typically little to be settled in the final weeks after nearly 11 months of racing and over 2,000 starts by the track’s leading drivers.

By December 1, 2018, Jason Bartlett had a 104-win edge on Jordan Stratton. In 2017, Bartlett came into the stretch of the meet with a 153-win margin. However, with two racing days left in the 2019 season, Jason Bartlett and George Brennan are locked in a tight battle for the Yonkers driving title.

On December 1, the duo was separated by just three wins (Brennan was leading 406 to 403). After trading blows throughout the last two weeks, Bartlett brings a three-win margin into Monday night (Dec.16) with 423 wins. It is the closest race in Bartlett’s memory.

“Not since I’ve been to Yonkers, never have. Usually by this time, everything is cut and dry of who’s going to get it and who’s not,” Bartlett said. “Between me and George, we drive hard against each other. We’ve always done that. At the end of the day, we still respect each other on and off the track. It’s a good competition, but at the end of the day, we still have a job to do and that’s to win races and get as much money as we can for the trainers.”

Although the race is proving a nail-biter, Bartlett had written off the title at the end of stakes season, when Brennan led by double-digits. However, after Brennan took a week off from December 7 to 14, Bartlett took a slight edge.

“Obviously, in any sport, you want to be No. 1. At that track, that year, it shows what a good year I had and the hard work I put in,” Bartlett said. “Going through the year, it’s not something you really think about. I was chasing sire stakes all year. Obviously, I can’t be in both places on a given night, so you have to give up something. This year, I focused a little bit more on the sire stakes, which got me behind a little bit not being at Yonkers all the time.

“As the stakes races got done, I was behind him and I kind of just chalked it up that I wasn’t going to catch him,” Bartlett said. “Then I got a little bit closer and he ended up going on his normal annual vacation, so I knew I would be able to close the gap a little bit then.”

Bartlett, 38, is chasing his ninth ‘Hilltop’ title, while Brennan, 52, is seeking his third. Bartlett saw Brennan as a mentor and an inspiration growing up, making the contest even more meaningful. However, the pair can leave the competition on the track and focus on their work.

“He’s a driver that I’ve looked up to my whole life,” Bartlett said. “Being in a competition against him, running for No. 1, is a pretty big deal for me. Growing up and knowing George and looking up to him.

“Between me and him, we’ve never really mentioned (the standings). I know he’s aware of it. Obviously, I’m aware of it. But we’re not driving any different against each other,” Bartlett continued. “You have enough to think about and try to put your horses in the best spot. That’s hard enough. Then you start thinking about George all the time and what I’m doing, is it going to affect George winning the race or not?

“You can only control what you can control. I can do my best to try to win races; I can control that. I can’t control what he’s doing and whatever else is going on. I try to control what I can and after that, it’s horse racing.”

Bartlett enjoyed another season as Yonkers’ top money earner. The horses he drove won $8.3 million through Saturday (Dec. 14). With Brennan away, Bartlett won 12 races last week. He won five races Friday (Dec. 13), including Mach It A Par’s final bow. ‘The Minister of Speed’ answered with three victories upon his return Saturday, including a wire-to-wire score from Post 8 with 18-1 upsetter Shoreview.

Barlett will drive in all 11 races Monday night (Dec. 16), while Brennan will steer in nine. The contest could be decided sooner than expected. Bartlett will miss closing night (Dec. 17), as he will be leaving on his family vacation. Brennan will drive in all 11 races on the Tuesday program. Regardless of the outcome, the contest is validating to Bartlett.

“For me, it means I’m doing my job. I’m there to win races and business is good. Every year, you shoot for it. You’ve got to have a little luck along the way and get some horsepower,” Bartlett said. “It’s a job that I love to do. I’m very competitive at it and it’s really nice to go to work and know every race matters. There’s no messing up. I know a lot of people are watching it. The track announcer is right on top of it. It’s nice to see it’s going to come down to the wire and to put a little spin on it, I will not be there the last day, so whatever I get through Monday is it.

Yonkers Raceway features live harness racing Monday, Tuesday, Thursday, Friday, and Saturday nights. The 2019 season will come to a close on Tuesday, December 17 and the 2020 season opener is scheduled for Monday, January 6.