Undefeated Dover In Motion, Ponda Adventure and Head Games all extended their individual win streaks after capturing their respective splits and delivered as the heavy post time favourites in the two-year-old trotting colt divisions.

The freshman trotters have now completed the fourth preliminary round of their six-round series as they look toward the $250,000 Super Finals slated for October 15 at Harrah’s Hoosier Park,

Dover In Motion and Ricky Macomber Jr. looked every bit the part of a 1-9 favourite as they coasted to a three-length victory in 1:55.2. Leaving from the rail, Dover In Motion settled off the gate in second before moving to the lead just before the half and was quickly on top by two lengths. Dover In Motion closed home in :27.3 under minimal urging from Macomber Jr. to get the victory. Iwont Back Down AS and Elliot Deaton finished second while Swan Harbor and Brandon Bates finished third.

As the heavy betting favourite, Dover In Motion returned $2.20 to win. 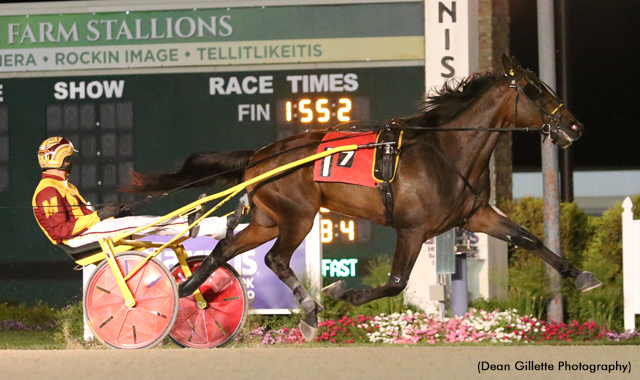 The Jamie Macomber trainee is now undefeated in five starts this season and sent his lifetime purse earnings over the $100,000 mark with the victory. Dover In Motion is owned in partnership by M&M Racing and Norbert Joseph Maza. The gelded son of Dover Dan—Keystone Sadie was bred by Lyle Dean Slabach.

Ponda Adventure and Trace Tetrick utilized similar tactics and extended a win streak of their own in the second split for trotting colts. Scoring in 1:55.1, Ponda Adventure grabbed the lead down the backside en route to a three-length victory. Swan Captain and John DeLong rallied well late for second while DJ Dan and Michael Oosting were third.

As the heavy betting favourite, Ponda Adventure returned $2.10 for the win.

Ponda Adventure is now undefeated in six starts this season and sent his seasonal earnings over the $100,000 mark. Ponda Adventure’s victory was one of four training wins on the evening for Erv Miller and one of four driving victories for Trace Tetrick.

Ponda Adventure is owned in partnership by Engel Stable Of Illinois, Louis Willinger, and Jerry Graham. The gelded son of Swan For All—Wildflower was bred by Pond A Acres.

In the final division of the stakes for the two-year-old trotting colts and geldings, Head Games and LeWayne Miller were able to overcome an unfavourable trip to score as the betting favourites. Head Games was parked but pressed on to the lead and is now undefeated in two lifetime starts. The 1:55.1 score was a new lifetime-best effort.

Trained and driven by LeWayne Miller, the gelded son of Swan For All—Southwind Goddess is owned in partnership by Bill Beechy and Flying Manes LLC. Head Games was bred by Larry Troyer.

On the trotting fillies side, the favourites also prevailed in their respective stakes divisions.

Fleurie and Peter Wrenn were able to overcome a tough assignment from post nine to score in 1:56.1.

The homebred daughter of Muscle Massive—Renees Pockets is owned by M T Pockets Stables and trained by Melanie Wrenn. Fleurie has now won four of five lifetime starts and has amassed $101,670 in lifetime purse earnings.

M Ms Dream was able to overcome a difficult trip of her own to score in the second split for two-year-old trotting fillies. With driver Sam Widger in the bike, M Ms Dream faced pressure for much of the mile but pressed on and went on to win by two lengths in a new lifetime-best of 1:56.2.