Divisional Honours Decided In 'The Crown?' 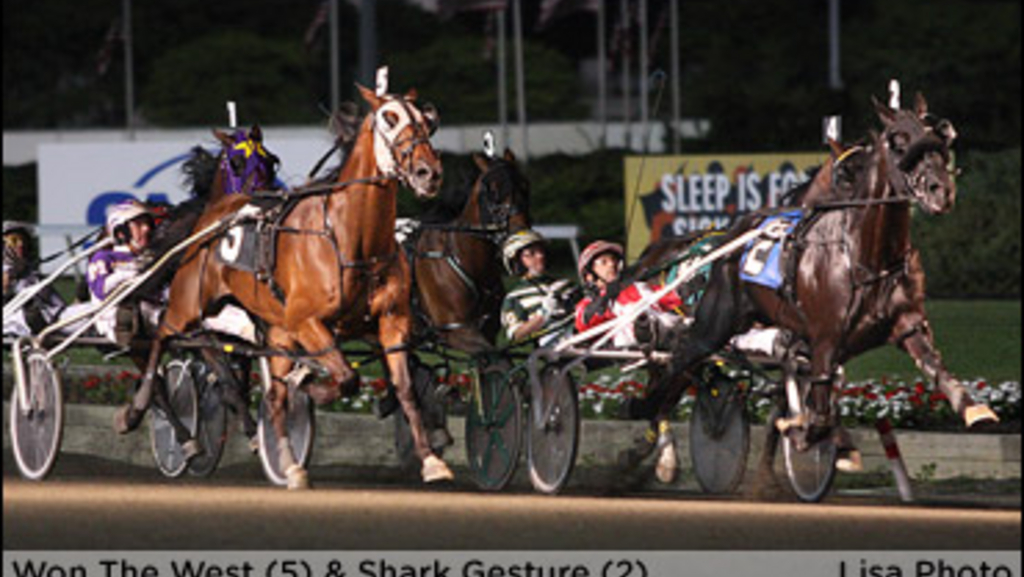 “I’m just looking forward to getting straightened away and kicking it into gear and seeing who can catch him.”

Last week, Shark Gesture tuned up for the Breeders Crown with a 1:50.3 qualifier at Pocono Downs. The seven-year-old horse has won seven of 11 races this season, including the $702,500 William R. Haughton Memorial and $228,000 Bettor’s Delight, and earned $918,875. He went off stride in the $748,800 Canadian Pacing Derby on September 4 at Mohawk Racetrack and finished last, marking the first time he finished worse than second this year.

“He’s in good shape,” trainer Larry Remmen said. “I would have liked to have had a prep race, but this will work out all right. He qualified in hand over there (at Pocono Downs). He’s easy to train and can go whatever you want by himself. He’s not one of those horses that need a race."

Remmen and driver George Brennan, who on Saturday became the 11th driver in history to eclipse $100 million in career purses, were unable to determine why Shark Gesture went off stride in the Canadian Pacing Derby.

“I don’t think he was on the bit like usual and I don’t think George was able to help him,” Remmen said. “Usually, he’s really aggressive and for some reason he was underaggressive that night. Those things happen. But there was nothing we could pinpoint. I’m not going to say it will never happen again, but I don’t expect it to happen again.”

Shark Gesture won the 2006 Breeders Crown for three-year-old male pacers and has won more than $2.8 million in his career.

Won The West is seeking to join Boulder Creek (2004-05) and Red Bow Tie (1998-99) as the only repeat winners of the Breeders Crown Open Pace. He won last year’s event in a stakes-record 1:47 at the Meadowlands. Won The West has won five of 15 races this year and finished no worse than third in any start while earning $1 million. His triumphs include the Canadian Pacing Derby and the $300,000 Molson Pace.

The six-year-old gelding is trained by Ron Burke and driven by David Miller. Won The West was the 2009 Dan Patch Award winner for best older male pacer. He has won more than $3.1 million in his career. He has two wins, three seconds and a third since being scratched from the Ben Franklin Pace final on July 18 because of leg swelling.

Won The West’s last race was a second-place finish to stablemate Foiled Again in the $354,000 Bobby Quillen Memorial on September 20 at Harrington Raceway.

“Ever since the Ben Franklin we’ve had to monitor his races,” Burke said. “I’m glad he didn’t have an elimination. He’s coming into the race good; his last mile was probably his best. We’re very happy with him. Both my boys are coming off sharp efforts.”

Foiled Again has won seven of 19 races this season, including the $460,000 George Morton Levy Memorial Pacing Series final, and banked $676,510. He is trained by Burke and driven by Yannick Gingras.

“Small-track racing suits him great, and (Won The West) too,” Burke said. “I think it might bring Shark Gesture back to us a little bit more, too. I think we have a good chance depending on the draw of maybe upsetting.”

Hypnotic Blue Chip, a four-year-old horse, has won seven of 22 races this year and earned $718,399. He won a division of the U.S. Pacing Championship in a world-record 1:47.2 on August 7 at the Meadowlands and was second in the Haughton Memorial and Canadian Pacing Derby. He is trained by Kevin McDermott and driven by Jody Jamieson.

Lucky Jim heads to the $600,000 Breeders Crown Open Trot off a track-record 1:52 win at Vernon Downs in the $195,000 Credit Winner on September 17. It was the 5-year-old gelding’s first start since a fourth-place finish in the Maple Leaf Trot and two-month break from action.

Eight rivals will face Lucky Jim in the Breeders Crown, which will go forward without eliminations. Joining him in the field are All Cantab, Define The World, Enough Talk, Hot Shot Blue Chip, Lanson, Neighsay Hanover, Slave Dream, and Triumphant Caviar.

Last year, Lucky Jim won the Breeders Crown on his way to the Dan Patch Award for best older male trotter. This season, he has won five of 11 starts, finished second four times, and earned $417,344. He will try to become the first horse to repeat as Breeders Crown Open Trot champion since Fools Goal (2002-03). The only other multiple winner was No Sex Please, who captured trophies in 1990 and 1992.

Enough Talk won the $235,750 Titan Cup in July at the Meadowlands and was second to Slave Dream in the $300,000 Nat Ray Invitational in August.

Triumphant Caviar is coming off a track-record 1:53.1 victory at Indiana Downs in the $100,000 Pride In Progress free-for-all.

Buck I St Pat will try to join Mystical Sunshine, Peace Corps, and Grades Singing as a multiple winner of the Breeders Crown Mare Trot. She will face six rivals in the $250,000 final on October 9 as eliminations were unnecessary. Joining her in the field are Autumn Escapade, Elusive Desire, Jersey As, Southwind Wasabi, Windsong Soprano, and Yursa Hanover.

Last week, Buck I St Pat was third in the $93,500 Ms Versatility at the Delaware County Fairgrounds in Ohio. She finished behind Autumn Escapade and Windsong Soprano in a world-record-equaling 1:53.2 mile.

“I was a little disappointed with her last start, but she went first up into a world-record mile,” trainer Ron Burke said. “We were a little bit worried we over-raced her. She really doesn’t respond to being raced a lot. I was thrilled there were no eliminations this week; I think that really plays much better for her to just come right in and race.”

Yursa Hanover won the $150,000 Conway Hall at Vernon Downs on September 10. Windsong Soprano is winless since June, but has finished second in her last six starts.

Dreamfair Eternal, who won the $372,000 Milton Stakes on September 25 at Mohawk Racetrack, accepted a bye to the final of the $300,000 Breeders Crown Mare Pace at Mohegan Sun at Pocono Downs, leaving nine horses to battle on Saturday for the last eight spots. Dreamfair Eternal has won 11 of 17 races this year, finished second four times, and earned a division-best $661,000.

She received the Breeders Crown bye based on this season’s purses.

In addition to winning the Milton, Dreamfair Eternal won the $160,000 Artiscape at Tioga Downs (in a then-track record 1:49.4) and was second in the $376,000 Roses Are Red. Tug River Princess, who is in the Breeders Crown elim, won the Roses Are Red.

Joining Tug River Princess in the elim are Chancey Lady, Ginger And Fred, Not Enough, On The Glass, Ramona DiSomma, Showherthemoney, Southwind Tempo, and Voelz Hanover.

A horse has never won back-to-back Breeders Crown Mare Pace trophies, a fact that will not change this year. Last season’s winner, Hana Hanover, is retired.

(with files from HRC)