Eight $55,000 Excelsior ‘A’ Finals for two and three-year-olds were contested on Saturday night (Sept. 21) at Saratoga Casino Hotel.

The culmination of the summer-long series was contested during a beautiful late summer evening in the ‘Spa City.’ 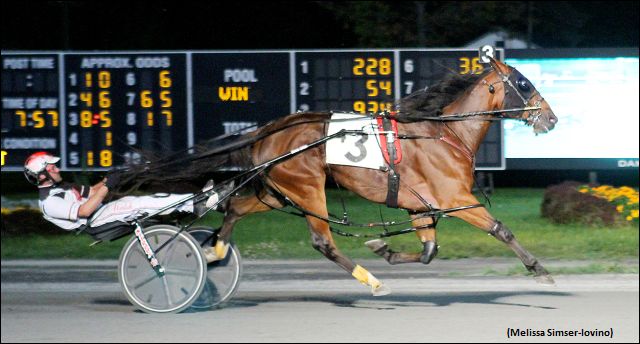 Century Ferrari, victorious in his Excelsior ‘A’ Final at Saratoga on Sept. 21, 2019.

Saturday ended up being ‘Miller Night’ at Saratoga, as reinsmen Andy and Marcus Miller prevailed in three of the eight finals. Marcus Miller piloted Century Ferrari (by American Ideal) to victory in the three-year-old colt and gelding pace in a sizzling 1:52.4 for his father, trainer Erv Miller. Century Ferrari got the jump on his race’s favourite, Rickybobbynthehaus, and held his foe off in the stretch before securing his fourth win of the season. Marcus Miller also sat behind the Anette Lorentzon-trained Alleyesonme AS (Heston Blue Chip) in the two-year-old filly pace, as she went coast-to-coast in 1:54.2.

Andy Miller recorded a win on Saturday night, as his Book Seven (Chapter Seven) went wire-to-wire in the final for two-year-old trotting colts and geldings and stopped the timer in 1:59.4. Julie Miller trains the freshman trotter who moved his seasonal record to five for nine with the victory. Scott Zeron was the other ‘out of towner’ to pilot a winner in a $55,000 final, as he guided the Blake MacIntosh-trained Fool Me Again (Roll With Joe) to a 1:53.4 score in the three-year-old filly pace.

Jimmy Devaux got the evening started for the Spa regulars by guiding Ideal Perception (American Ideal) to a front-end score in 1:54.2 in the two-year-old colt and gelding pace. Tony Alagna trains the freshman pacer whose victory was his third of the season. John Stark Jr. trains and drives C And Ts Credit (Credit Winner), who cruised to a first-over win in the two-year-old filly trot and stopped the timer in 2:00 for an open-length score.

Mark Beckwith and Frank Coppola Jr. each catch-drove a finals winner on Saturday, as Beckwith guided Certify (Credit Winner) to a career-best victory in 1:55, which paid immediate dividends for his new connections. The three-year-old gelding went coast-to-coast in his first start out of the Lance Hudson stable. Coppola’s win came while sitting behind George Ducharme’s Hanna Dreamgirl (Chapter Seven) in the three-year-old filly trot. Hanna Dreamgirl sprung the biggest upset of the night, as she swooped the group in 1:58.3 and did so at odds of 19-1 with Coppola at the controls.