You Rock Girl Kir and driver Stephane Gendron wanted to control the pace and after two lead changes, upset the field at odds of 21-1 in capturing the $5,500 Fillies and Mare Preferred Handicap Pace on Sunday (Sept. 19) at the Hippodrome 3R. 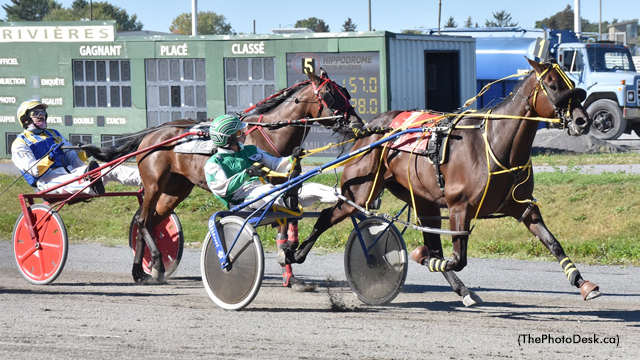 At the start, Kiss Me Bad and trainer/driver Steven Gagnon left from post eight, but ended up parked three-wide as they tried to march on towards the leaders.

By the half-mile in :58.1, Warrawee Speedy (Samuel Fillion) came first-over and they were able to keep Kiss Me Bad parked three-wide down the backstretch with both horses moving up on race leader You Rock Girl Kir to the three-quarters in 1:28.

On the final turn, Gagnon was able to keep Kiss Me Bad going three-wide with Sophies Cam out of the pocket, but starting down the stretch, You Rock Girl Kir kicked in another gear and went on to win by 2-1/2 lengths in 1:57. Wild River Swan (Pierre-Luc Roy) closed to be second with Sophies Cam finishing third.

The time of the mile was a lifetime mark for You Rock Girl Kir, a five-year-old mare by Shadow Play owned and trained by Andre Denault of Sherbrooke, Que. She paid $45.90 to win. You Rock Girl Kir now has three wins from a dozen starts this year.

After driver Stephane Brosseau won the second race pace, he was greeted in the winner’s circle by former driver Lorenzo Fugere, who was celebrating his 99th birthday at the racetrack. 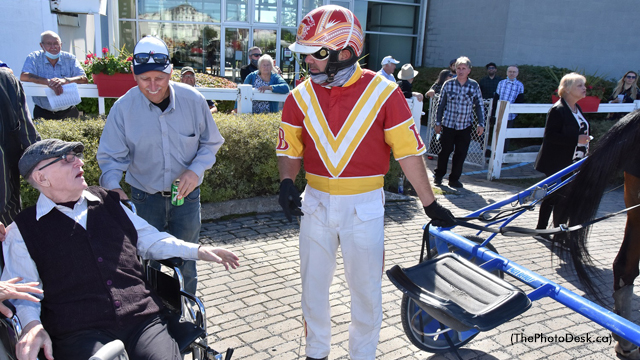