Bee A Magician Vs. The Best Ever 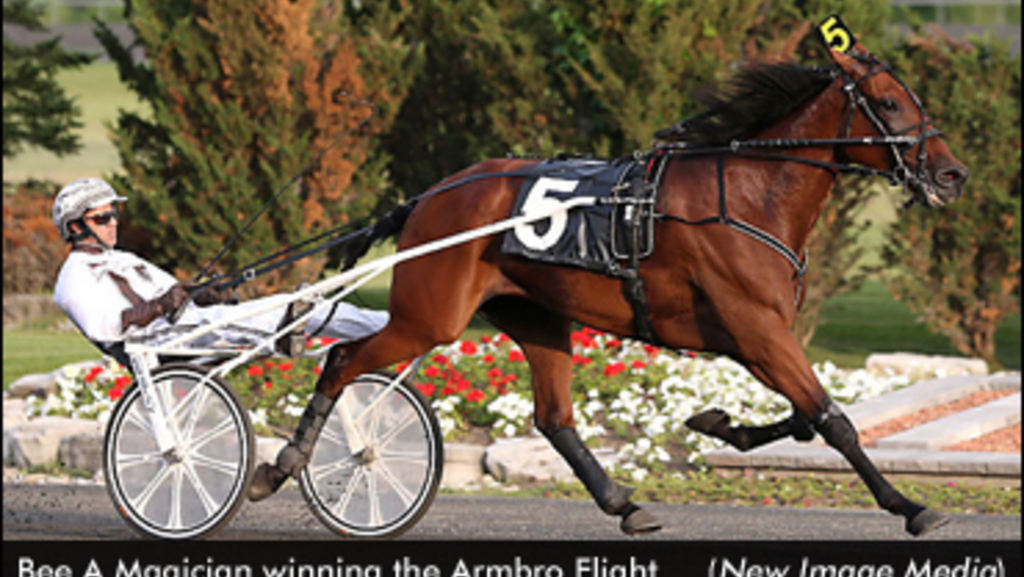 When Ontario Sired super mare Bee A Magician turns to the starting gate Saturday in the $680,000 final of 63rd edition of the Maple Leaf Trot at Mohawk Racetrack, her part-owner Mel Hartman will be biting his nails watching the race on TV from his Ottawa home.

The five-year-old daughter of Kadabra out of Beehive has earned more than $3.3 million, but Hartman said he still gets nervous every time she races.

“If she can beat the boys I think it is another feather in her hat,” Hartman said. “It’s an honour, in a way, because usually horses race in their own class, which is tough enough.”

Bee A Magician finished a neck behind Natural Herbie Sept. 12 in their Maple Leaf Trot elimination. The mare drew post two in the final, which is race seven on a card that features four other rich stakes finals for trotters, including the $700,000 Canadian Trotting Classic for three-year-olds.

“I feel more confident this week, because last week she hadn’t raced in about three weeks and I thought she’d be short, but she raced very well,” Hartman said.

Earning a cheque would push Bee A Magician past Hall of Fame pacer Somebeachsomewhere on the all-time earnings list for Ontario Sired standardbreds into fourth-place behind trotter Arch Madness ($4.3 million) and pacers Mister Big ($4.1 million) and Boulder Creek ($3.8 million).

Hartman said Bee A Magician would be given every opportunity, health willing, to continue to climb the money list. On Oct. 10, she will represent Canada while taking on the boys again in the $1 million International Trot at Yonkers Raceway in New York City.

“I think we would like to race her as long as she’s sound and healthy. If she can continue to race at this level, I take a look at what Moni Maker made and there’s been some comparisons of [Bee A Magician] to that horse,” Hartman said of the late, great U.S. trotting mare that earned nearly $5.6 million lifetime and frequently beat the boys in stakes races on both sides of the Atlantic. “That horse was a hell of a horse. I don’t know if [Bee A Magician] is in the same league or not, but she can be mentioned in the same paragraph, that’s for sure.”

Two years after Bee A Magician was a perfect 17-for-17 and earned more than $1.57 million en route to the Horse of the Year Award in both Canada and the United States, the magic mare is still a model of incredible consistency. She’s won eight of 12 starts this year and put more than $550,000 in the bank for driver Brian Sears and New Jersey based Richard “Nifty” Norman.

“Honestly, every day I think about her I have to pinch myself that I own a horse like that,” Hartman said. “She’s just one hell of an athlete. She knows how to take care of herself and she’s really something special... I can’t say enough about her. She’s just a special, special horse. It’s more than a once-in-a-lifetime dream. It’s an honour to own a piece of her.”

Hartman, the owner of the wholesale produce company Orleans Fresh Fruit based in Ottawa, said some of his customers get a kick out of seeing what trinkets he’s added to the Bee A Magician display he has in his office.

“It’s nice to work away at my desk and look up and see her. It just gives me a warm feeling,” he said. “I have Breeders Crown trophies, I have pictures. If I added more, I’d have to build a bigger office and add more walls.”

He would dearly love to add a Maple Leaf Trot to the collection, despite no longer having the desire to make the long road trip from the nation’s capital to Campbellville to see the race in person.

“It would be a hell of an honour to win Canada’s prestige trotting event and something that would be down in history forever. It’s something they’d never be able to take away from her,” Hartman said.

(With files from Ontario Horse Racing)