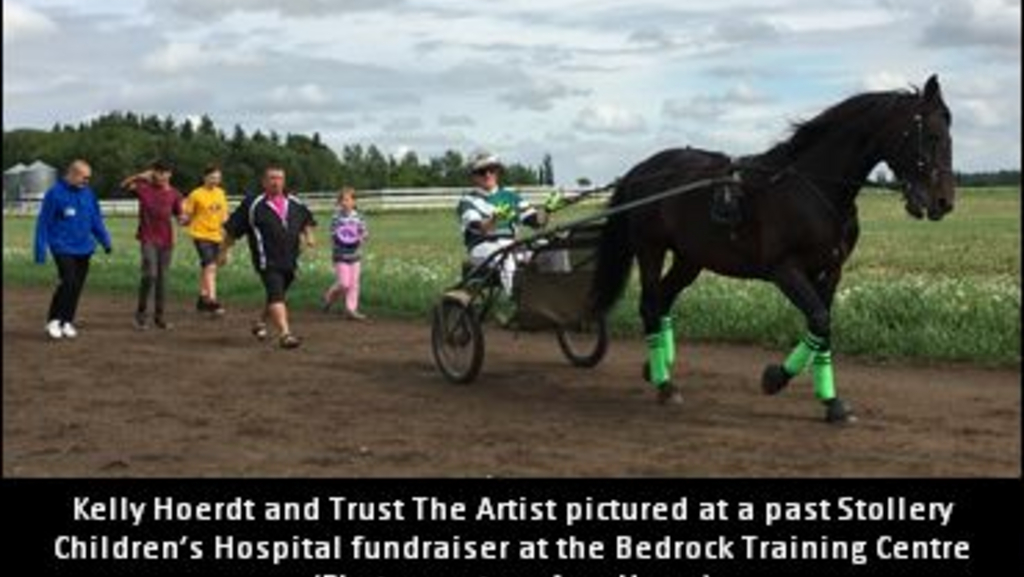 Nitza’s Pizza and Bedrock Farms’ fourth annual Family Picnic Fundraiser in support of the children’s Stollery Hospital took place this past Saturday (Sept. 8) at the Bedrock Training Centre just outside of Beaumont, Alta., and Kelly Hoerdt has told Trot Insider that the day was another success.

“The event was another successful fundraiser for the children’s Stollery Hospital,” Hoerdt told Trot Insider. “We gave approximately 200 children jog cart rides throughout the day and the horses were all very well behaved and patient.”

Hoerdt explained that the weather wasn’t the greatest, but that it actually helped the event. “It was overcast and not very warm,” said Hoerdt, “but that helped out the silent auction, as it was indoors.”

The fundraiser featured great food, kids’ activities, live music, the silent auction, and a 50/50 draw. All donations and proceeds from the event were given to the Stollery Children’s Hospital Foundation, as well as being earmarked for a special initiative.

The fundraiser has turned out to annually be one of the most positive racing-related endeavours in Alberta. The fundraiser has also targeted a specific cause this year, as it has paid special attention to the wishes of 10-year-old Ciara Hiscock, who is suffering from a very serious brain tumour.

As a report by CTV News Edmonton explains, the Hiscocks’ hopes in regard to the situation have now turned to focusing on a project.

“Ciara wanted a place (a ‘memory garden,’ where she can always be with her family) to come and visit where she knew we would be down the road,” said Ciara’s father, Darren Hiscock. “She wanted us to get this done and find us a place where she knew where to come to visit us.”

To make the memory garden a reality, the Hiscocks will need land, help – and it has to happen quickly. “It’s just a place where we can always go and be with her,” said Ciara’s mother, Tiffany Hiscock. Ciara has also requested that the spot have a nice place to sit – be it a hammock, chair, nice bench – and wind chimes.

“There is a family that reached out to me and I cannot let them down – I would not let Ciara down at all,” said Peter Giannakopoulos of Nitza’s Pizza.

“I’d really like to thank Standardbred Canada, ASHA, Northlands and Chad Schmiedge from Hub Insurance for their continued support of this very worthwhile event,” Hoerdt told Trot Insider. “Also, I’d like to give a very big ‘thank-you’ to all my staff that assisted in helping get the kids out on the track. Additionally, Nitza's Pizza and all their volunteers deserve a ton of credit, as this couldn’t happen without them.”

(With files from CTV News Edmonton)