Some of Ontario horse racing's most prominent leaders were front and centre on Friday (August 9) at Woodbine Racetrack for panel discussion on the state of the province's horse racing industry. 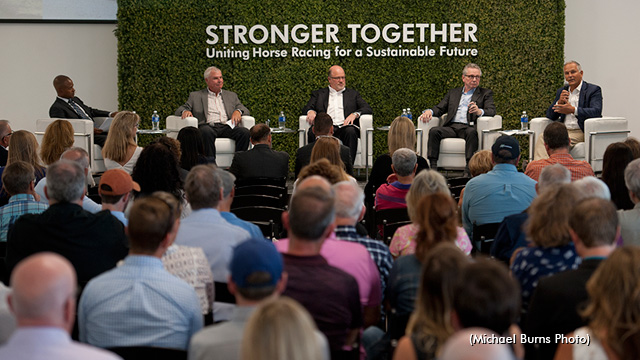 This session was the first of many town hall-type gatherings, according to Portuondo, with a similar discussion to be held at Woodbine Mohawk Park in the future. He noted that Woodbine wants to communicate with the industry, and it wants to do a better job.

A wide-range of topics were discussed on Friday during the two-hour session. Trot Insider has learned that the full presentation will be made publicly available.

Here are some of the topics discussed on Friday, listed by speaker.

Hayes noted that Ontario Racing (OR) was formed at the request of government, who wanted a cohesive voice to work with them going forward. He noted that the goal of OR is self-determination and sustainability of the horse racing industry with the following objectives: increase wagering and public awareness, administer and allocate funds, with the recent addition of ensuring responsibility for equine care.

To that, Hayes pointed out that OR secured more enhanced funds for the HIP program, has fully functioning committees, started a promotional campaign with OLG, rolled out a program distributing betting coupon vouchers at racetracks, and they recently taken on promoting ownership.

With respect to equine safety, Hayes stated that Ontario was ahead of the curve on California and that they've been working with Equine Guelph with studies on racehorse illness and injury.

Hayes was asked about the importance of a high-quality racing product and said, trying to avoid cliches, that "the industry has to work together...Absolutely paramount." For that competitive racing, there's a dire need an adequate horse supply to provide a solid product for the customer -- the betting public.

On the topic of horse ownership, Hayes mentioned how "it's a tough sell when your first line [to a new owner] is you're going to lose money." He said that a team at OR is actively working on a targeted focus on prospective new owners and groups. Hayes the works done by TheStable on the Standardbred side, stating that the key is to move those fractions to higher fractions or new full-fledged owners. The new owner focus at OR will be more on the thoroughbred side.

Looking at racing across the province, Hayes was asked if OR envisioned any of the smaller tracks closing. The answer from Hayes was not yes or no, because it's too early to tell. The crunch time will come in March 2021 when the roll-out of the new long-term funding agreement begins. With that, the province's landscape will be assessed with respect to wagering, horse supply and track plans. At that point, Hayes feels OR will make a decision on what's best for the province's racing industry.

Rigby noted that the long-term funding deal was important for Ontario's horse racing industry to give the participants predictability. "I've worked on this through two governments, both of which were tremendously committed to this deal."

With respect to the long-term funding agreement, Rigby reinforced that while there's likely a lot of chatter in the industry over the pre- and post-SARP funding amounts it was not easy to secure this level of funding given the financial constraints and pressures facing today's province.

Given the topic of sustainability, Rigby was asked if horse racing can be confident in long-term sustainability. "It's a complex industry. I would suggest that it's about creating conditions for the product to evolve," said Rigby, noting that the conditions today are better than what he's seen, and that he can't think of an industry on the planet that isn't under some sort of pressure.

Rigby was asked about new revenue streams for horse racing through OLG. "We are always open to conversation about different revenue streams," said Rigby, who noted that the OLG is currently working on enhanced platforms in the event that single-game sports betting becomes legalized.

A question was posed regarding the Optional Slots At Racetracks Program (OSARP) that's currently in place at some racetracks. Rigby stated that the deal was for seven years and the government would need to reevaluate at that time.

Major started by noting the differences in his role and how it's evolved since his first stint with the Ontario Racing Commission in the early 2000s. Before the ORC was involved with business-type decisions like race dates, and now there's a separation between industry business decisions and regulation that's made it "cleaner" for the AGCO.

He noted that three factors determine regulation: economics, maturity of the sector, risks and compliance culture of the industry. These factors evolve and change over time, according to Major, and the regulator needs to maintain confidence in the sector from the perspective of the consumer by maintaining a level playing field.

Major discussed a shift in regulation style from command to collaboration, with a focus on outcomes. He discussed risk-based compliance, focusing resources on areas that cause problems.

The topic of horse safety came up given what has transpired at Santa Anita. When asked if racing in Ontario was safe, Major answered in the affirmative, noting that the safety of horses and participants is paramount. But he followed that by noting that perception is as important as reality, and the industry cannot rest on its laurels on this one. Major listed the plethora of programs the AGCO has in place for participant safety, but stressed that there's a need to do more. The AGCO will undergo a thorough review on the rules of racing before the end of the year and safety will be a major part of that review. Nothing is off the table in this review, as the last time the rules were reviewed to this level was 2000.

Major addressed the race-day medication ban, citing the need to "level the playing field" and maintain integrity in the sport.

With respect to integrity and a level playing field, Major noted two basic concepts: meaningful sanctions, and establishing an environment with a reasonable expectation of getting caught. He used the analogy of a driver on the 401, doing 110 km/h vs. 117 km/h vs. 120 km/h in a 100 km/h zone, and how it's important to understand the level of tolerance. He noted that industry collaboration is required as the regulator needs to understand the implications before implementing change.

Major was asked to discuss the new urging rules that have rolled out province-wide, stating the AGCO is pleased with the results thus far. He noted the welfare of horse, participant safety and public perception have all been taken into account, and the balance wasn't easy to find. "This one you really have to put your mind to. Talk about a culture change, this is one."

Lawson was asked about Woodbine's mandate and why the racetrack has it taken on a leadership role. He referenced back to 2012 and the SARP announcement, stating that "the world changed for all of us" and that Woodbine had to take a hard look at the way we were doing things. One of the important things to appreciate, according to Lawson, is that Woodbine has a non-for-profit mandate, and they have a Board that understands that mandate. The mandate for Woodbine is horse racing.

With that, the Board is comprised of a "very, very strong group" according to Lawson, noting the skillset of the Board is consistent with what is required to run this corporation. Lawson referenced the likes of Christine Magee and horse racing industry participants such as John Fielding, Clay Horner and Doug Millard that are heavily invested in the business.

With respect to business, Lawson noted that Woodbine has "the burden of carrying the horse racing industry in many different ways." And with that, racing is still a losing business proposition for Woodbine as the track lost $68 million in 2018 by conducting live horse racing. 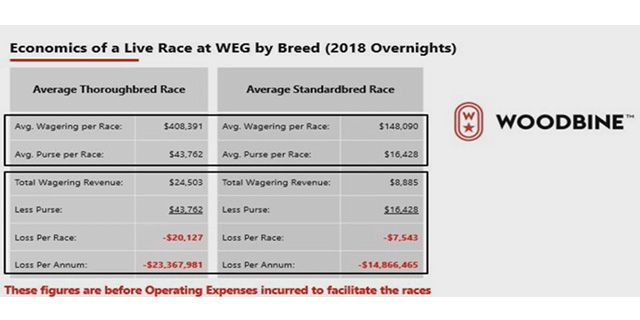 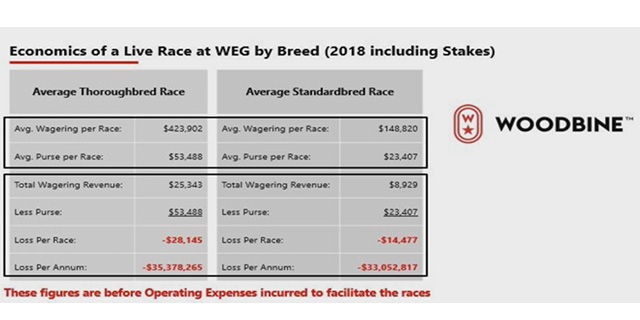 So the question is, how does Woodbine make it work? Lawson stressed that there's a need for patience with respect to gaming expansion and the projects that Woodbine has in store. "You need to be tolerant of the OLG and gaming expansion. Without our relationship with OLG, we don't have a business."

Even with an extremely successful Queen's Plate in 2019 with a record $18 million handle, Lawson stated that was essentially a break-even proposition for the track -- not even taking into account the $2 million in purses handed out over that card.

Lawson acknowledged a number of evident hurdles to get off that government funding, and stated that Woodbine doesn't want to be dependent on it. "We think we can get there in four to five years," said Lawson, noting they have projections on numbers and a mandate is to make it work.

"We're doing it all to make sure this industry is around for decades."

The topic of Lasix was addressed by Lawson. "I personally do not connect the dots like Santa Anita did. It's not to suggest Woodbine will not go there someday....it's a very difficult and delicate issue. It's about humane treatment of a horse and there's no question that Lasix helps." Lawson went on to say that the issue needs to be studied carefully and Woodbine needs to continue to consult with industry stakeholders going forward.

Lawson was also asked to discuss the issue of participant suspensions, which he noted is part of the fair administrative process and the Horse Racing Appeal Panel has been established to give people a fair hearing with due process. Where Woodbine comes into conflict, according to Lawson, is when an individual is granted a stay until the hearing stating it puts the track under undue pressure and possibly tarnishes its reputation.

"There's a mentality that if you can get away with it, it must be OK. And that's got to change...We're only hurting ourselves as an industry if we tolerate it."

Lawson stated that Woodbine has submitted through counsel means to expedite the appeal process, while going so far as reference a trump card with trespass to property laws. "It's not the means we'd like to use, but it's a legal means," said Lawson, stating that Woodbine plans to work more on participant codes of conduct so it have a contractual means to handle situations like this in a different way.

The topic of fixed odds wagering was raised, with Lawson stating that Woodbine would be looking into it but it's a regulatory matter at this point. He noted that sports wagering is a big threat to horse racing, "[Sports wagering] will cannibalize our industry if we don't play a role," said Lawson, "We will be very loud and very noisy about participating in [sports wagering]....and I do believe it's coming," noting that it's a $10-12 billion industry and that Woodbine has many assets that make sense for it to play a role in sports wagering should it be legalized.