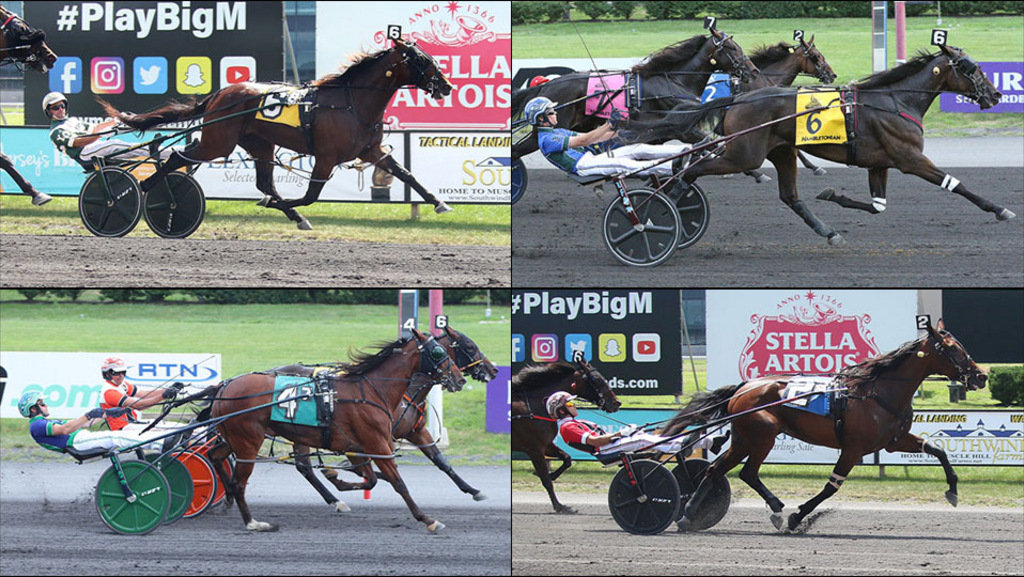 The lure of $2,242,500 in purses has attracted many of harness racing’s stars to The Downs at Mohegan Sun Pocono on Saturday afternoon for its biggest card of the year, Sun Stakes Saturday.

The 14-race program, starting at 1:30 p.m., is bringing to the mountain oval five of the Top Ten horses in the most recent polling, including the leading trotter, Bella Bellini and Hambletonian winner Cool Papa Bell.

There will also be $100,000 Invitationals for the top older horses on both gaits: the Always B Miki Pace and the Sebastian K S Trot, named after the co-fastest pacer and fastest trotter ever at Pocono.

Here is a brief look at the top horses in the major contests on the Sun Stakes Saturday card, per event:

It’s been an unusual year among the Hambletonian-calibre trotters, as a filly, Joviality S (entered in the Delmonica Hanover) has generally been regarded as the leader of this age and gait. It became even a bit more unusual after the Hambletonian itself on August 6 when Cool Papa Bell, who had exhibited steady but not championship form at both two and three, came from far back to win the classic and return $106.00 to his scattered backers. He drew the rail for the Beal Memorial, with Todd McCarthy scheduled to retain his Hambletonian perch behind the Chapter Seven gelding for trainer Jim Campbell, who had himself quite a day as he also won the Hambo Oaks with Fashion Schooner.

A horse who has impressed many people with his consistency is the Walner colt Temporal Hanover, starting from post six for driver Brian Sears and trainer Marcus Melander. Temporal was second by a head in his Hambo elimination and third, only three-quarters of a length behind after hard usage, in the Hambletonian, and his versatility may make his post less of a consideration than it might be for many horses.

Certainly the “hot horse” in this group is the Downbytheseaside gelding Bythemissal, who begins from post three for driver Chris Page and trainer Ron Burke. Bythemissal came to the Adios at the end of July undefeated in six career starts but largely unknown out of his immediate area in the Midwest, then was second in his elimination, soundly defeated favoured Beach Glass in the Adios final, and has since impressively added the Milstein at Northfield Park to his credits.

Beach Glass has a very steady record of five wins and three seconds in eight seasonal starts, winning the Meadowlands Pace and Cane Pace while dancing in all the biggest dances. The son of Somebeachsomewhere will be looking to avenge his Adios defeat while starting from the rail for trainer Brent McGrath and driver Yannick Gingras.

Treacherous Dragon started the season with six straight victories, including winning at Pocono and taking the important Fan Hanover Stake in Canada for trainer Nancy Takter, who took over her care at the end of June, and driver Tim Tetrick. And from post six and with three straight board finishes, the daughter of Captaintreacherous is a major consideration in this event.

However, the filly who has usurped her as the poster girl for this division is starting just to her right – the filly Max Contract, who comes to the Lynch off a four-race win streak. Included in that string for driver Andy Miller and trainer/wife Julie were stakes victories at The Meadowlands in the Mistletoe Shalee, Geers, and Shady Daisy – the switch to post seven over the smaller Pocono oval is the biggest question mark for the fast-closing filly now, although she did show gate jet in her last start.

As if she needed it, Joviality S, a daughter of Chapter Seven, has drawn the rail for trainer Marcus Melander and driver Brian Sears. The filly won her first six seasonal starts, including the Yonkers Trot against “the boys,” and she did very well in the Hambletonian against mostly male opposition, missing by a neck while third in her elim and then second by three-quarters of a length in the Final. The highest-ranked of all three-year-olds at number five in the Top Ten, Joviality S is also the only millionaire in the four big sophomore stakes, having already earned $1,491,818.

Her fellow Swedish-bred, Jiggy Jog S (you can tell by the “S”), won a Hambletonian elimination, and then missed only 1-1/2 lengths while fourth in the Hambo Final. With four wins and two seconds (and that close fourth) in seven starts this year, this daughter of Walner, starting from post three for trainer Åke Svanstedt and driver Dexter Dunn, certainly rates as the major danger to Joviality S on paper.

(Some of last year’s top two-year-olds who have not quite regained top form at three to date are in the consolation races, among them champion colt trotter King Of The North, along with these 2021 $200G+ winners: pacing filly Lyons Serenity, trotting filly Misswalner Fashion, and pacing colt Early Action.)

Obviously in the three-year-old races you cannot have a defending champion returning, but the defending champion from last year’s inaugural Always B Miki Pace is here – the Captaintreacherous gelding Allywag Hanover, starting from post four for trainer Brett Pelling and driver Todd McCarthy. Last year Allywag won in a world-record-equalling 1:47.2, and became one of the very few horses anywhere, anytime to pace three sub-27 quarters in one race. Allywag has won his last two starts at Harrah’s Philly, and he shows two seconds to this year’s #1 horse, Bulldog Hanover, who is taking this week off to prepare for important races in his native .

Last year’s inaugural winner of this event was the great mare , and a female may wind up as the favourite in this open event – the Bar Hopping distaffer Bella Bellini, the highest-rated trotter this year at #2, behind only “the Bulldog.” Bella Bellini wasn’t entered in the inaugural Delmonica Hanover last year, but she did win a Pennsylvania Sire Stakes Championship here a couple of weeks afterwards, and in the last twelve months she has won the Hambo Oaks and Breeders Crown at three and at four the Hambletonian Maturity and the Steele Memorial in her last start, where she lowered her mark to 1:49.4. She has a difficult starting spot in post seven for trainer Nifty Norman and driver Dexter Dunn.

Along the inside is another millionaire mare, When Dovescry (trainer Brett Pelling, driver David Miller), who has plenty of Pocono experience and who has been 1-2 39 times in 55 career starts; along the outside is Lovedbythemasses (trainer Jeff Cullipher, driver Tim Tetrick), who posted the fastest trotting mile of the year in eastern Pennsylvania when he won Philly’s Maxie Lee Trot in 1:51 in May.