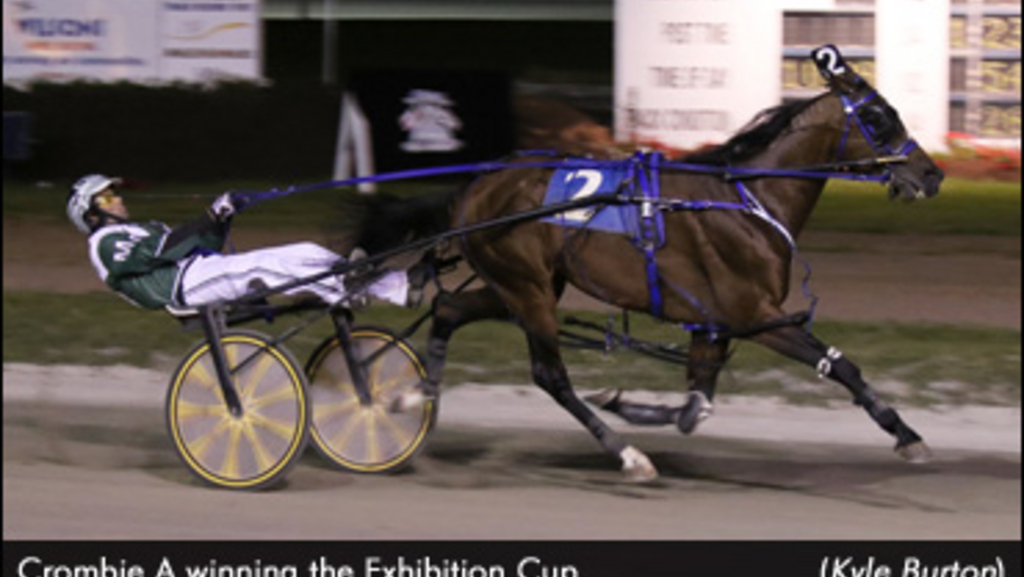 Crombie A closed out the action-packed card of harness racing with a 1:52.4 record mile, which was three-fifths of a second faster than the previous best co-held by five past Exhibition Cup champions.

Favourite Hot Deuce (Gilles Barrieau) out-left the three inside horses and blazed through :26.2 first quarter with a three-length lead on pocket-sitter Junebugs Baby (Myles Heffernan Sr.). However, Crombie A launched his first-over attack from third in front of the grandstand approaching the :54.4 half-mile mark and pursued the leader into the backstretch where he eventually took over for driver Marc Campbell. Crombie A began to draw away from the field past three-quarters in 1:23.2 and was only racing the clock down the stretch. The 11-year-old veteran won by seven and three-quarters lengths, while Good Friday Three (Clare MacDonald) closed from the back of the five-pack to finish second just ahead of His Boy Elroy (Bernard McCallum).

Earl Watts trains Crombie A, who was a runner-up last weekend in the Governor's Plate at Summerside Raceway, for Allard Racing Inc. of Saint-Esprit, Que. and Kapildeo Singh of Yorktown Heights, New York. The son of Life Sign and Medea Me notched his 28th career win and boasts $719,057 in purse earnings.

Three-year-old pacing colts and geldings faced off in their second leg of the Atlantic Sires Stakes on Saturday, with Mighty Cowboy and Island Energetic winning their respective $10,000 'A' divisions.

Trained and driven by Darren Crowe, Mighty Cowboy took the lead over Carters Caper (Clare MacDonald) during the :28.2 first quarter and fronted the field through middle fractions of :58.3 and 1:27.1 with Complete Player (Mark Bradley) advancing first-up and and early trailer Lucbobski (Danny Romo) fanning three-wide off cover into the stretch. However, the Brandons Cowboy-Mission Beach colt held off his pursuers by half a length to win in 1:56.4 for owner David MacDonald of Halifax, N.S. Complete Player was second and Lucbobski third. The stakes win completed a perfect three-for-three night for the Crowe stable.

The consistent sophomore Island Energetic and trainer/driver Marc Campbell were left uncovered when co-favourite Ashes To Ashes (Gilles Barrieu) cleared Howmacs Dragonator (Todd Trites) after opening panels of :29.4 and 1:00.1. The Articulator-Luscious Character gelding continued to advance outside through three-quarters in 1:29.2 and Ashes To Ashes could not shake him turning for home. Island Energetic took over down the stretch to score the 1:58 victory by one and three-quarter lengths for owners Grayland Farm of Pugwash, N.S., and Bernadette Burgess of Dartmouth, N.S. Howmacs Dragonator finished second over Ashes To Ashes.

Driver Gilles Barrieau swept the $2,500 'B' divisions as the Kevin MacLean-trained Cowboys Dont Cry and just held off favourite Johnny Moe (Marc Campbell) in a career-best 1:57.2 mile and favourite J J Tanner defeated pacesetter Jdcyril (Walter Cheverie), who finished with broken equipment, in a new lifetime mark of 1:58.4 for the Robert Phillips stable.

The three-year-old pacing colts will head to Charlottetown Driving Park for their next event on August 14.

Ramblinglily earned her seventh consecutive victory after leading gate-to-wire in the $5,739 second leg of the Atlantic Aged Mares Pacing Series. Driven by Walter Cheverie, the popular Articulator-Crafty Jewel mare carved out fractions of :28.2, :58.4 and 1:28.3 en route to the 1:56.4 triumph. West River Ambyr (Clare MacDonald) followed in the pocket to finish one and a half length back in second while Woodmere Articblue (Marc Campbell) finished third after launching a first-over challenge during the third panel. The seven-year-old mare Ramblinglily is now a 53-time career winner for trainer Allan Jones and co-owner Normand Leger of Shediac, N.B.