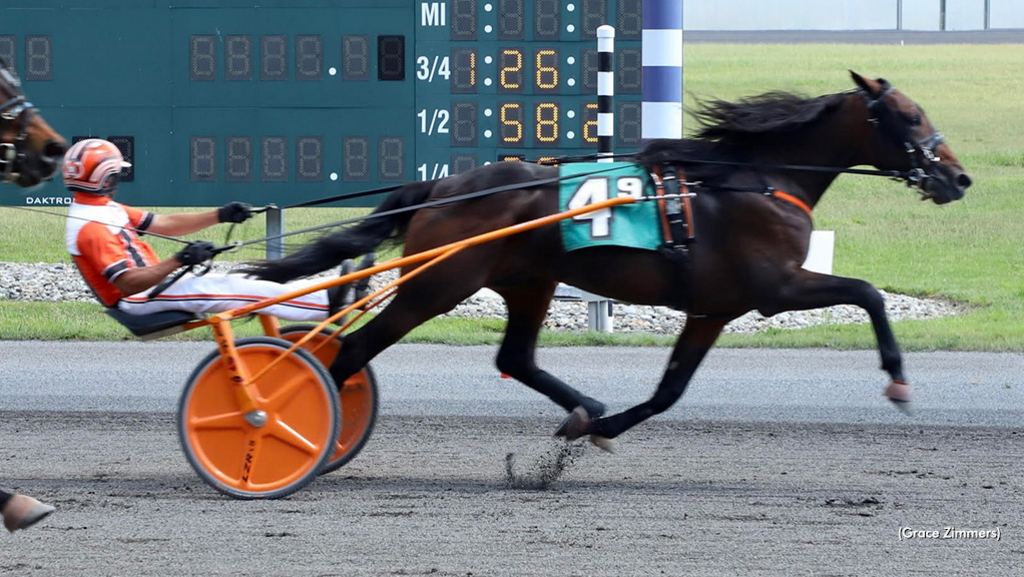 Crantini went a 1:56.2 mile to win his second consecutive Pennsylvania Sire Stakes (PASS) outing during the Thursday afternoon (July 21) card at Harrah’s Philadelphia, while French Wine broke his maiden while going three-fifths of a second faster in capturing the other $75,816 division.

The International Moni-Peach Martini colt Crantini has already captured stakes at all three of Pennsylvania’s pari-mutuel tracks, with a Sire Stakes win at The Meadows and a PA All-Stars victory at Pocono joined by the Philly mile. Scott Zeron got to the lead with Crantini in :28.3, backed the half to :59.1, then passed the three-quarters in 1:27.3 (aided by the day’s backstretch tailwind) before outfinishing Once In A Lifetime by three-quarter lengths for trainer Megan Scran and The Stable Crantini Group while equalling his mark.

Though making only his second purse start, French Wine joined Crantini as a winning favourite, largely on the strength of being photoed out in 1:55.1 in his bow last Friday at The Meadowlands. Here, the Bar Hopping-Creamy Mimi colt raced from far back for driver Andy Miller, moving after early splits of :28.1 and :58.2 and then going his own third panel in an amazing :26.3 to be challenging for the lead by the 1:26.1 three-quarters. French Wine kept going in the lane and was a length clear of 42-1 shot Kobe B at the finish for trainer Julie Miller and Andy Miller Stable Inc., Daniel Plouffe, Jean Christophe Plouffe, and Michael Cote Gagnon.

Driver Anthony MacDonald and trainer Tim Twaddle combined to win two of the four $20,000 Stallion Series divisions, both with favourites and one each with the two sires who also produced Sire Stakes winners. The International Moni-Brigham Dream colt Carter Michael Deo was on best behaviour and showed a good rally from the pocket to win for the first time in 1:57 for Thestable Cartermichaeldeo. Thestable MacDonaldtwaddle also paraded back the front-stepper Tailgate Buzz, a Bar Hopping-Twin B Alibi gelding, after the freshman won his third-straight – here in 1:58.1 – for owners Thestable Tailgate Buzz as their freshman became his division’s only double Stallion Series winner.

The Southwind Frank-Southwind Maywood colt Sir Frank is now undefeated in two starts after recording his fastest time, 1:57.2, for driver Matt Kakaley, trainer Jenny Melander, and the partnership of Melander Racing Inc., Clark Stables LLC, and John Devito. The other Stalllion Series section gave a clue as to why Tim Tetrick tops the drivers standings here: he sat third early with the Father Patrick-Prettiestgalaround colt Alonso when the leader made a break and caused the pocket horse to make an interference break. Tetrick calmly avoided trouble, went to the lead and got a 1:59.1 maiden victory with Alonso for the meet’s top trainer, Per Engblom, and the ownership of Engblom Stable LLC, Wiesman Farms LLC, and R A W Equine Inc.

In a $22,500 fast-class handicap trot, the Explosive Matter gelding Scirocco Rob was let go by the crowd at a generous 10-1 – he was coming off a three-week layoff, but he had won two of his last four starts in this class at the riverside oval. Well, now make that three-for-five, as Scirocco Rob rushed up uncovered in the last half, coming his own back fractions in :55.1, :27.2 to complete a 1:53.1 mile where he was 1-3/4 lengths clear at the wire. Corey Callahan drove the winner of $687,546 for trainer Mark Silva and owner Kathleen Whitaker.

The racing week closes out at Harrah’s Philadelphia with a Friday card at 12:25 and a Sunday program beginning at 12:40 p.m. (EDT). Program pages are or will be available at the PHHA website.