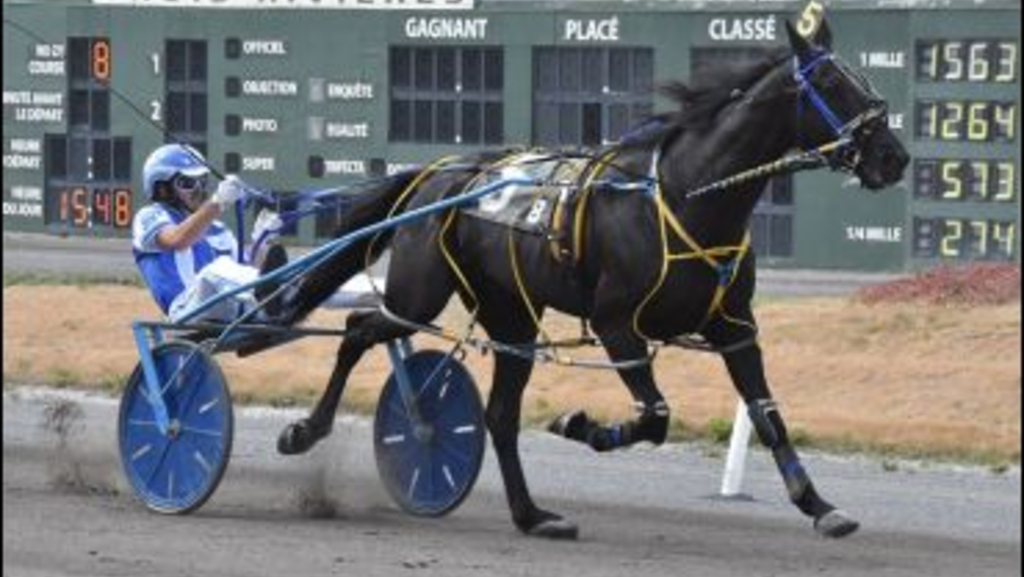 This past Sunday, 23-year-old Samuel Fillion scored his first victory as a professional driver and now he is hungry for more.

While competing in the last race on Sunday, Fillion, who hails from Mont-Joli, led from start to finish with the pacer D J Power, and notched a 1:56.2 victory at the Hippodrome 3R.

Fillion was patient. He was able to get to the front with D J Power, then rated the best fractions for his horse. Fillion kept his composure, as he did last year on the Quebec Regional Fair Circuit.

Driving harness horses the past five years at the fairs has seasoned Fillion in his quest to become a professional driver. Last year, he blossomed and earned his license. He started in 87 races and collected 18 wins, 11 seconds and 14 third-place finishes, good enough for a strong Universal Driving Rating (UDR), or batting average, of .331.

Now comes 2020 and Fillion is off to a great start. In four drives he has notched one win and two third-place finishes (his UDR is an impressive .416).

"The racing world is sometimes cruel,” Fillion said. “I heard comments that I was not able to win a race at H3R. Now it’s done and I’ll do my best not to be last again.

“On Sunday," Fillion explained, “I thought I was going a long way behind Pascal Berube (Stock), but the opposite happened. I know this horse well. I even jogged him last week and I knew he was good, and on Sunday afternoon he showed it to everyone. I am very happy that this first victory is behind me. I will do my best to justify the confidence of the people who will put my name on their horses." 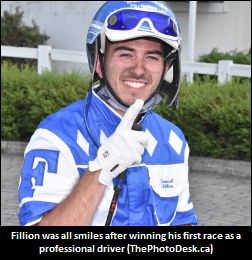 Fillion has earned the respect of owners and trainers that. Now, for this coming Friday’s program at H3R, he has secured three drives, and is also scheduled to steer D J Power on Sunday.

“My father had racing horses when he was young,” Fillion said. “My grandfather was a blacksmith at that time. After several years without horses, my dad bought a gelding, Classic Mondial. I was 14 when I start taking care of this horse. He performed well and that gave us the taste to continue and to buy others.

“Now,” Fillion added. “I also have the opportunity to learn with my father-in-law, Jean-Marc Roy, and my brothers-in-law Louis-Philippe Roy and Pierre-Luc Roy, and I am very grateful for their expertise they share with me.”

Fillion has a drive in the Preferred Trot (Race 5) on Friday. It’s aboard Lucky Promesses from the far outside post eight. A tough position for any horse to overcome.

Last week, Fillion was able to get a third-place finish with Lucky Promesses. From the outside post this week, Fillion will need to find some good live cover to help keep him in the hunt.

“The mare raced well last week for her first start of the year,” Fillion said, “despite her Post 8 this week if she had a good mile in her she can do well. We will see.”

The race favourite is stablemate Holiday Party (to be driven by Pascal Berube), who was second in the top trot last week. Isabelle Binet trains both horses.

“He is a young man from the same place as me,” Berube said regarding Samuel Fillion. “I lent him Fortune Fella for a final in Trois Rivières two years ago, and he won. There are not many horses to drive in the early days of our career, so I wanted to help him and we needed someone to drive Lucky Promesses.”

Other contenders in the field include Caroluzzo (Post 1), who was a 2:02.4 winner last week and is moving up in class, the front-end speedster R Rkadabra (Post 3) and Voodoo Man (Post 6).

When asked who his favourite driver is in harness racing, Fillion was a little bias.

“Louis-Philippe Roy is my favourite driver,” Fillion said of his brother-in-law. “He started in fairs like me and now he's one of the best drivers in all of Canada. Also, I like his style and the way he sits on the bike.”

First-race post time on Friday will be at 4:00 pm. For a free race program, visit www.hippodrome3r.ca.