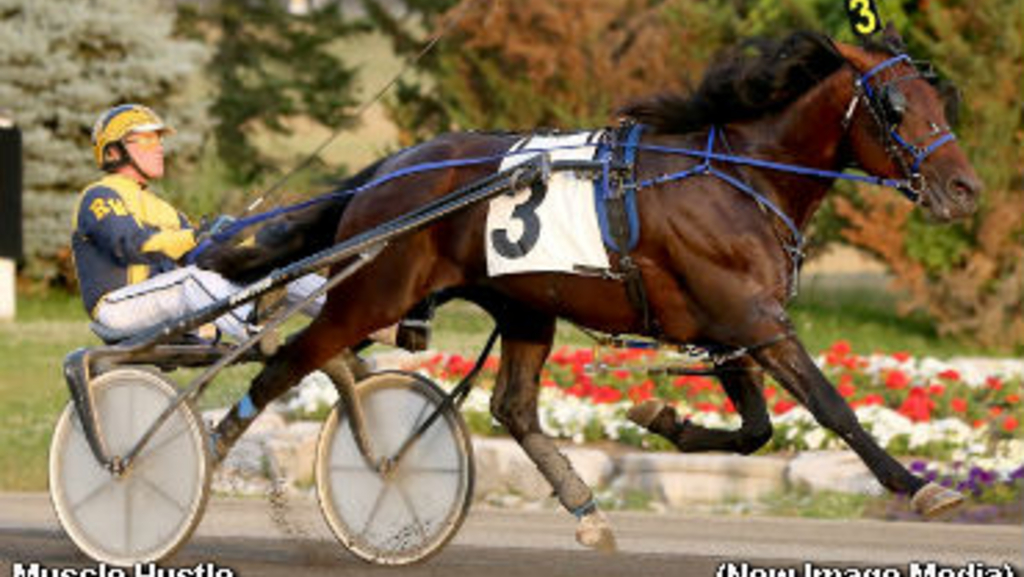 Three-year-old trotting colts and geldings sparred in a set of $105,000 OSS Gold Series divisions Monday evening at Mohawk Racetrack, and the hardware went to a pair of first-time Gold Series winners.

Muscle Hustle took a brief two-hole tuck for driver Randy Waples in the first division, but a backstretch move proved to be the winning move for the Per Henriksen pupil. Waples over in the second quarter and the pair knifed their way through middle splits of :56.4 and 1:24.2. The colt stormed home in :28.2 to win by 1-1/2 lengths over Sass in 1:52.4. Smoke Monkey took home the show dough in the rich tilt.

The career-best performance for the son of Muscle Mass-Crown Laurel earned him his fifth win of the season from just seven trips to the track. Ecurie Bergh Inc of Norwood, Ont. owns the career winner of $121,260.

Warrawee Roo was parked every step of the way in the second division, but it didn’t stop him from knocking off the 1-9 favourite in an eye-catching clocking of 1:53.3.

Dia Monde and race favourite Will Take Charge took turns on the lead through fractions of :27, :56 and 1:24.4, but it was Warrawee Roo who dug down deep in the late stages of the mile en route to posting the win by a length over Will Take Charge. Dia Monde rounded out the Triactor ticket.

Sent off at odds of 15-1, the son of Majestic Son-Karoon scored his fourth win of the season in six attempts for trainer Luc Blais. Determination of Montreal, QC owns the career winner of $80,320.

Flanagan Memory, a former star of the OSS program, demolished the foes he faced in Monday’s $34,000 Preferred Trot. Chris Christoforou got away third with the favourite, before blasting him to the top in the backstretch. Together they led the group through middle fractions of :54.4 and 1:23.4 before rolling home in :27.3 to win by nine lengths over Whiskey Tax. Charmed Life was third.

Trainer Rene Dion co-owns the six-year-old son of Kadabra-Classy Stacy with Liette Flanagan of Repentigny, QC. The 1:51.2 clocking tied the North American season’s record for an older trotting horse. The victory was the third of the season – and the 16th to date – for the career winner of $1,054,271.