In Oldford's contest, he sent his trotter Starsaboveallerage to the lead from post 2 and they carved out fractions of :29.2, :59 and 1:28.2 with Joe Pennacchio and Cheeky Little Minx shadowing the leader's every move.

However, when Starsaboveallerage rounded the final turn and headed for home, he was quickly joined by Cheeky Little Minx and the two trotters raced for the wire head to head and nose to nose. When the photo was deciphered Oldford's trotter was a nose better that Pennacchio's.

“My horse went a game race and he hung tough when we were challenged by Joe's horse [Cheeky Little Miss] in the deep stretch,” Oldford said. “And we were so close at the wire I wasn't sure who won it. I was happy to hear the announcer call my horse the winner.”

Oldford Racing owns the winner, who trotted in 1:58 and is trained by Allen Sisco.
In his division, Faraldo gunned Tough Get Going to the lead when the wings of the mobile gate folded, but yielded command to Winwood Scout and driver David Glasser before the quarter which was clocked in :28.2.

“I really had no other choice but to grab leather and let Glasser take command or else he would have run me down,” Faraldo said. “We got over to the half in :59 seconds and I was still comfortable when we passed three quarters and I sat in until we rounded the final turn, at which point I moved to challenge and we cleared Glasser and braced for a challenge from [Matt] Zuccarello [with Gianni].” 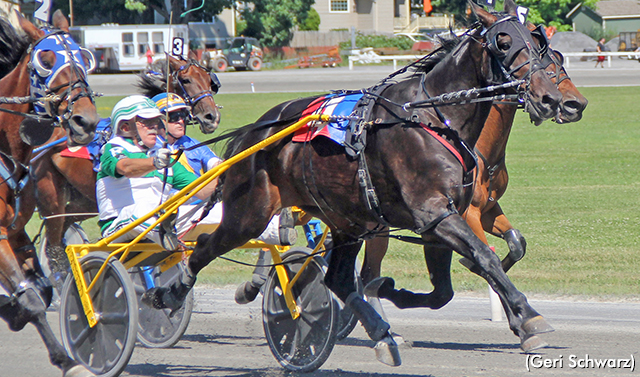 Like the previous Billings event it was a two-horse charge to the wire and so close a photo was needed to declare a winner. Gianni was a nose back at the wire and Winwood Scout faded and finished third.

Faraldo co-owns the winner, who trotted in 2:00, with trainer Richie Banca. He collected his first winner on American soil this year after having had two victories in France earlier this season.

(With files from CKG Billings)