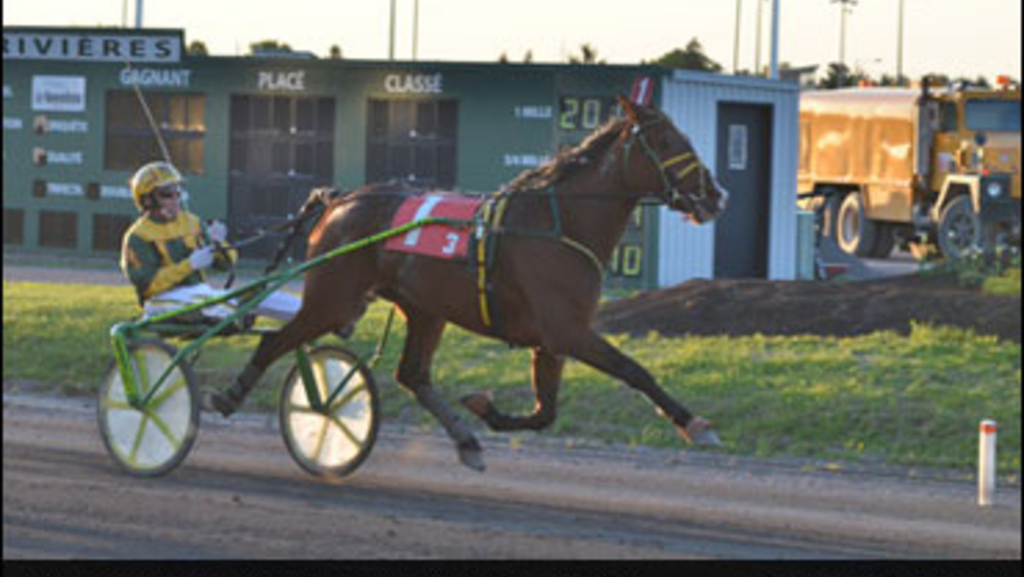 Both Maximuscle and divisional track record holder Viva Bayama were impressive winners at the Hippodrome 3R in the opening round of the $125,000 Quebec-Bred Series for four and five-year-old trotters on Wednesday.

There were four divisions, each racing for a purse of $7,500. There are three weeks of eliminations with the highest point-earners returning on Sunday, June 14 for the $35,000 finals in their respective divisions.

Maximuscle and driver Mario Charron had little trouble in capturing their division in the fourth race. Charron needed only to send Maximuscle to the lead and never looked back.

The four-year-old gelding by Angus Hall showed his heels to the field, cutting fractions of :29.1 to the quarter, 1:00 to the half and then turned it on by the three-quarters in 1:29.1, breezing home to win by two and one-half lengths in 1:58.4. Andovers Touch (Stephane Pouliot) tried coming first-over at the half-mile marker and finished second with the pocket-sitting George S P (Stephane Brosseau) third.

It was the first start of the 2015 season for Maximuscle, who is trained by Maxime Velaye for owner/breeder Ecurie Provoquante of Mirabel, Que. The winner went off as the overwhelming race favourite at odds of 1-9 and paid just $2.10 to win.

The first race, first division saw Somoli E and owner/driver Jerome Lombart sit a perfect two-hole trip behind pacesetter SOS Masters Boy (Jocelyn Gendron), and then after a battle down the stretch, win by a neck in 2:02.3. SOS Robocop (Pascal Berube), after racing first-over, faded to third.

The win was the first in two starts this year for Somoli E, a four-year-old son of Mr Lavec, trained by Andreane Lapierre. He paid $4.50 to win.

Viva Bayama and driver Denis St Pierre raced parked out first-over the entire mile and still were able grind it out in the third race, first division for older mares.

Canbec Kangourou (Jocelyn Gendron) left out of the gate and cut the mile as St Pierre was content to race first-over. Viva Bayama finally cleared to the lead before the head of the stretch and then held off a fast-closing Bambie Benjo (Rheo Filion) to win by three-quarters of a length in 2:01.3. Canbec Kangourou faded in the stretch and finished third.

The win was the fifth in eight starts this year for Viva Bayama. The four-year-old daughter of Muscle Mass is owned by trainer Sebastien Giroux and partners Richard Dinelle and Andre St Laurent. She paid $4.40 to win.

The sixth race, second division was won by Ocean Mist Beauty and driver Stephane Brosseau. They cleared to the lead before the opening quarter, which saw the first four horses all try for the early lead. Ocean Mist Beauty then led the rest of the one mile trot, winning by three-quarters of a length in 2:02. Lucyll Bro (Stephane Gendron) sat the pocket-trip to be second with Sexy P V (Yves St Jacques) third.

The five-year-old mare by Kadabra posted her first win in five starts this year for owner/trainer Carl Duguay of Gatineau, Que. She paid 3.20 to win.

Live racing resumes Sunday at the Hippodrome 3R with the opening round of the $125,000 Quebec-Bred Series for four and five-year-old pacers. Post time is 1:30 p.m.