Easy Lover Hanover kept his Canadian race record perfect with a front-stepping score in the second leg of the Youthful Pacing Series during an eventful, snowy Saturday night (April 2) at Woodbine Racetrack.

The Youthful Series is for three-year-old pacers that are non-winners of three races or $15,000 in 2015.

First leg winners Easy Lover Hanover (Jody Jamieson) and Flaherty (Trevor Henry) drew outside posts seven and eight, respectively, in round two's $17,000 single division. Just to their inside, Sport Mercedes (James MacDonald) left for the lead into a 27-second first quarter over Mach Power (Randy Waples). Meanwhile, Jamieson pointed Easy Lover Hanover to the front off the gate and they took over command into the backstretch.

Mach Power moved first over and The Catamount Kid (Doug McNair) tipped out to follow his cover while Easy Lover Hanover led the way through middle splits of :56 and 1:24.1 before opening up a couple of lengths on top turning for home.

The Catamount Kid, the slight 2-1 bettors' choice over the first leg winners, rallied off cover and began to reel in Easy Lover Hanover, gaining on the leader with every stride. However, Easy Lover Hanover managed to hold off his quick-closing rival by a head for the victory in 1:53.1. Sporty Mercedes finished three and a quarter lengths behind in third, with early trailer Flaherty and Mach Power rounding out the top five finishers.

The Somebeachsomewhere-Easy Go Go colt extended his win streak to six in a row. He has been undefeated since being purchased for $70,000 at the January Select Mixed Sale by Brad Grant of Milton, Ont. and joining the Ben Wallace stable.

Easy Lover Hanover, along with The Catamount Kid, Flaherty, Dreamfair Mesa (sixth), and Beast Mode (eighth) remain eligible to the $1 million Pepsi North America Cup, which will be contested on June 18 at Mohawk Racetrack.

In this week's $34,000 Preferred Pace, Boomboom Ballykeel (Sylvain Filion) pulled off a mild upset as he defeated favourites Nirvana Seelster (Rick Zeron), Canada's fastest horse of the year courtesy of his 1:49.1 victory in this class last week, and Nickle Bag (Trevor Henry), the nation's richest horse of the season with five prior Preferred wins.

Last through first-half fractions of :26.4 and :55, Boomboom Ballykeel followed the cover of Wazzup Wazzup (Randy Waples) during the third panel. The pacesetting Nirvana Seelster continued to lead the field of six by three-quarters in 1:23.2 and into the stretch, but Boomboom Ballykeel out-sprinted him to the wire, closing in :27.1 to prevail by three-quarters of a length in 1:51.2. Nickle Bag, who was shuffled to the backfield, came on for third.

Boomboom Ballykeel, a runner-up last week to Nirvana Seelster, paid $13.50 to win as the 5-1 third choice in the wagering.

The win was the first of three on the card through seven races for Moreau and Filion. 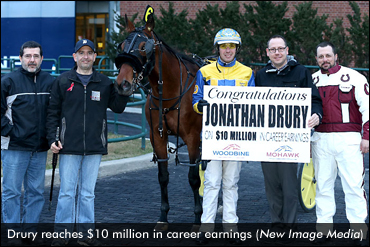 The Woodbine Entertainment Group congratulated driver Jonathan Drury in the winner's circle after his first race victory aboard the Carmen Auciello-trained D Gs Pesquero, which sent his lifetime earnings over the $10 million mark.

Drury, who just turned 27 years old on March 31, is coming off a career year in 2015 in which he drove winners of almost $2.15 million in purses. He's topped the million-dollar mark every year since 2012 and is among the top 10 money-earning drivers in Canada with $580,000 already earned this year.