Penn Triumphs In Another Open Trot 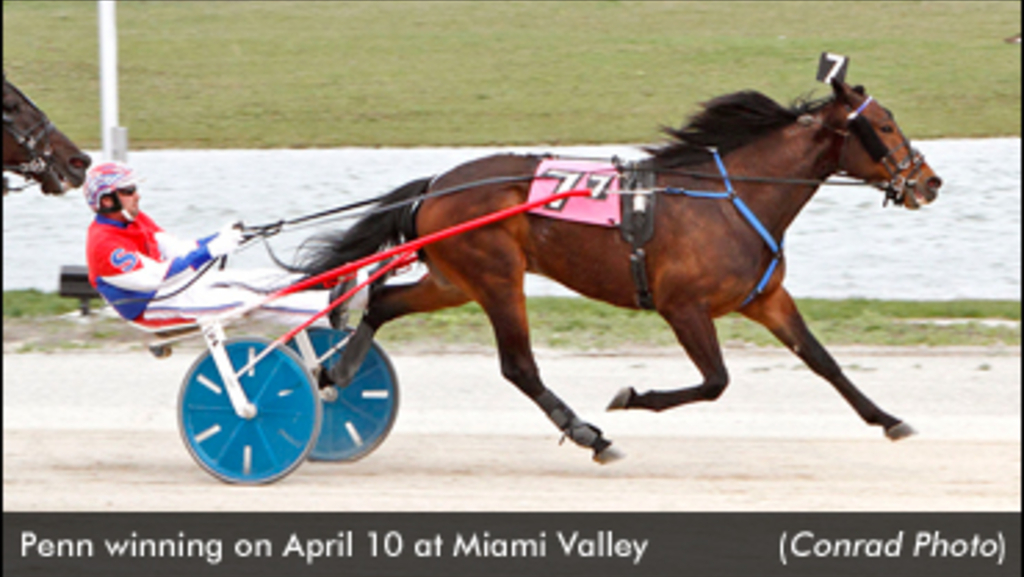 Penn did it again! For the fifth time in seven attempts, the six-year-old son of Master Glide captured the $20,000 Open Trot at Miami Valley Raceway on Sunday afternoon (April 10).

The Bobby Brower trainee was put through a demanding first quarter (:27) by driver Josh Sutton, but got a second quarter breather (:31.1), reaching the half in :58.1. With the field double-tiering front to back in the second half, Penn coasted to the 1:26 third quarter and then fought gamely in the final panel to hold off Tinder (Tyler Smith) by a length in 1:55.3. Southwind Pepino (Sandy Beatty) rallied for third in his seasonal debut. Barkley Counts owns the winner, who now sports 33 wins in 70 career starts and a growing bankroll that is up to $264,994.

A trio of first leg divisions of the Robert J. (Skeeter) Brown Memorial Trotting Series for non-winners of two pari-mutuel races or $15,000 were also contested. Phat Stacks was the upset winner of the first split for owner/trainer/driver Tim Roach. The sophomore son of Lockkeeper topped The Next Triumph (Jeremy Smith) and Rompaway Hustler (Roy Wilson) in 1:59.2, returning $34.20 for a $2 win wager. Chip Or Don bested Master Class (Chris Page) and Judana (Jeremy Smith) in 2:01 in the middle division for owner/trainer/driver Tye Loy. The three-year-old Chip Chip Hooray colt returned $11.40 to his backers. The final division was won by Fantasy League (Kyle Ater) over Crowned With Glory (Ed Greeno Jr.) and Improper Elegance (Dan Noble) in a 1:59.2 mile. Mike Sowers owns and trains the winner, who paid $5.80.

Miami Valley’s Lucky Pick 5, covering races eight through 12, went unsolved resulting in a $1,408.97 carryover into the pool for the 50-cent wager when racing resumes on Monday (April 11) afternoon with a 2:05 p.m. post time.