Driver Yannick Gingras felt confident in four-year-old mare Vintage Babe when she faced the starting gate for the opening leg of the Petticoat Series at Yonkers Raceway March 6. The daughter of Vintage Master who Gingras co-owns had won four of her seven seasonal starts and hit the board in the other three, but those races were all out of town on bigger tracks.

Vintage Babe’s first start on Yonkers’ half-mile oval was anything but routine. There was a recall before the race and Gingras could sense his mare was unsettled. When the wings of the gate finally folded, Vintage Babe left hard, but went off stride before the midway point of the first turn.

“She caught me by surprise. She got really hot and she went into the first turn pulling hard on me and wanting to go way too fast,” Gingras remembered. “She made a break there and I kind of shrugged it off thinking she was a little too excited, a little too grabby.”

Although she lost several lengths, Vintage Babe reset her gait in a matter of strides. Turning into the backstretch, Gingras found himself in a tough spot. Vintage Babe was caught wide in fifth about six lengths from the lead. However, as the race’s 1-20 favourite, Gingras’ decision was clear.

“As soon as she got back pacing I knew I had to pull back to last or make a move to go to the front. For me, there was only really one option: it was go to the front,” he said.

Although Vintage Babe sprinted to the lead and held off her challengers to the wire, she hardly lived up to her odds-on status. She won by a desperate half-length in 1:57.2 and only mustered a :30.3 final quarter. 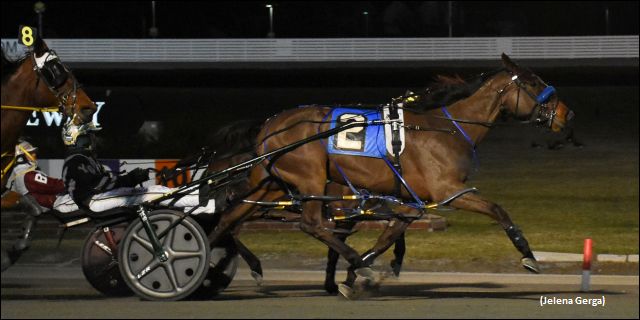 Vintage Babe (2), victorious in the opening round of the Petticoat Series (Photo courtesy Jelena Gerga)

“She was really no good,” Gingras said. “Something was really off with her because once she made the front, she barely held on and that’s not her. That race, even though she made a break, she should have won by five (lengths), honestly.”

For Week Two of the Petticoat, Gingras and trainer Ed Gannon Jr. made some adjustments they thought would help Vintage Babe negotiate the hilltop oval. Instead, she made another break while unhurried at the start from Post 5.

Despite her early troubles, Vintage Babe again reset and made the most of her predicament. Charging from last, she passed a rival on the outside before diving back to the pylons on the final turn. Gingras guided her into the passing lane in the stretch and she rallied to finished third, six lengths behind winner St Kitts. In doing so, she earned enough points to make the Petticoat Final.

“I never really got her going till almost the top of the stretch and from where I was sitting, there wasn’t much of a chance. She paced the stretch really good the second week,” Gingras said.

Although Vintage Babe’s path to the Petticoat Final was unconventional, it comes as a pleasant surprise for her connections. Gingras partnered with longtime friends Frank Canzone, Bob Sabatini, and Gannon to buy her out of the 2016 Harrisburg sale for $40,000.

“Frank Canzone, we go way, way back. He’s actually the first guy that bought horses with me when I came to Yonkers 15 years ago,” Gingras remembered. “Ed had a horse named Looking Hanover years ago. He owned him already and I was driving for him. I actually tried to buy him to give him to Burke to train, but he wasn’t interested in selling the horse. I ended up buying a piece of him and that’s how we hooked up.”

The group hoped Vintage Babe could make money racing in conditioned races at Dover Downs this winter. She exceeded expectations, winning her first six starts at the Delaware speedway and set a new lifetime mark of 1:52.2 January 10. As the wins piled up, so did her earnings. Vintage Babe has already made $49,010 this year, bringing her career total to $99,591.

By earning enough points to make the Petticoat Series final in the first two legs, Vintage Babe was able to skip the last preliminary March 20. Her connections seized the opportunity to make adjustments. Now, she’s primed for Monday’s $61,000 stakes where she’s the 5-2 second choice on the morning line.

“The week off will definitely be beneficial to her. She hasn’t been that good on the half and racing her four weeks in a row would have been a little too much for her,” Gingras said. “The day after that second race, we got a lot of vet work done on her and had two weeks to work. There were a lot of positives there.

“We were able to train at the farm, do the equipment changes, and try them versus just trying them in a race. That was positive as well,” he continued. “She trains on a half-mile track at home and she trained quite hard at the farm this week. (Ed) said she could not have trained any better. We’re really optimistic.”

Even if Vintage Babe handles the track, the Petticoat Final won’t be a walk in the park. The race’s favourite, Cousin Mary, raced in all three preliminary legs and won them by 5 3/4, 5, and 3/4 lengths, respectively. Cousin Mary drew the rail in the final and was installed as the 9-5 favourite.

“On paper, the best horse got the rail. Obviously I think she’ll end up cutting the mile,” Gingras reasoned. “As far as I’m concerned, I just have to make it through the first turn and go from there. There’s no plan going in.

“I’ll see how she feels in the post parade. I’ll score her down quite a bit to see how she feels. I still think that Cousin Mary is a really nice mare, but I know how good my mare is as well. If she doesn’t struggle on the turns, I think I can go with her. I’m not saying I can beat her, but I do know that my mare is in the same class as her.”