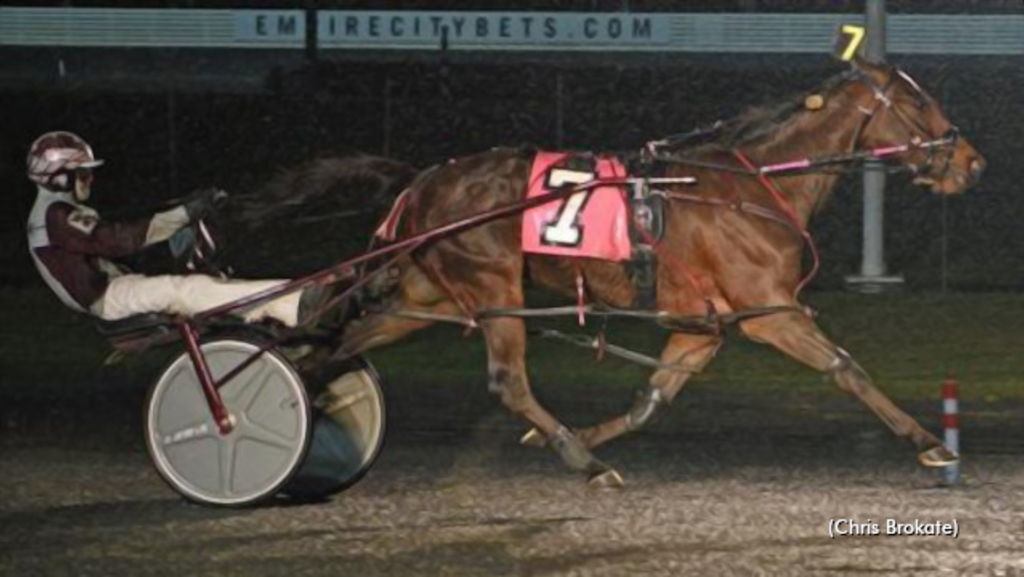 Dragon Said, who joined an exclusive club of sub-1:50 performers at Yonkers Raceway a year ago, romped on the front-end in Monday night’s (February 28) $39,000 Open Handicap Pace at the Westchester half-mile oval.

Driven by Joe Bongiorno, Dragon Said went right to the top from post four and chopped out fractions of :27.1, :56, and 1:23.3, gaining separation on the rest of the field in that :27.3 third quarter. There was no catching Dragon Said from there, as he used a :27.4 final panel to slam the door on the 1:51.2 decision, defeating a closing-from-last Leonidas A and driver Austin Siegelman by 3-1/2 lengths. Speed Man N, steered by Jason Bartlett, held third after a pocket trip.

While he had to settle for third in the Open Handicap, Bartlett did his share of posing for pictures on Monday, as he was the winning driver in half of the 12 races. He teamed with trainer Gareth Dowse to take the sixth with Kinnder Jackson, the ninth with Joesstar Of Mia A, and the nightcap with Jojos Place. Bartlett’s other victors were Runrunjimmydunn N (trained by Doug Dilloian Jr.), Shoreview (sent out by Tahnee Camilleri), and Cyclone Banner N (a Jeff Cullipher pupil).

Cyclone Banner N’s 55-1 upset in the fifth dash was the key to the night’s Pick 6 sequence going unsolved, and as a result, there will be a $6,166.72 carryover in that wager on Tuesday night (March 1). There was just one winning ticket in the Pick 5, with that lone sharp handicapper collecting a return of $15,836.50.

For the second time in less than a week on a racing program at Yonkers, wagering topped seven figures, ending at $1,006,005.70.