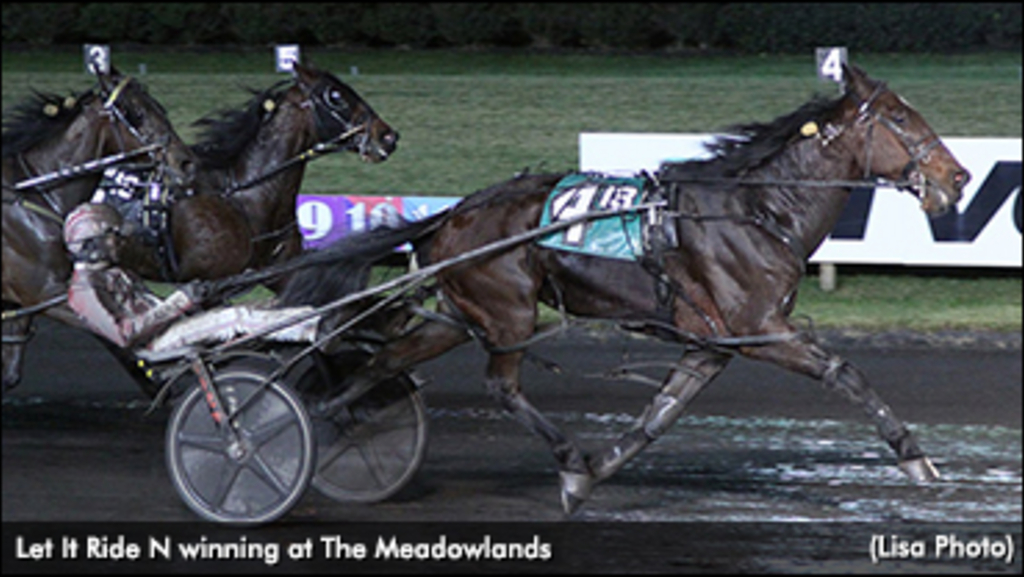 Last week, Let It Ride N was pushed to post taxing fractions of :53.1 to the half and 1:20.1 to three-quarters before weakening late to finish fourth as the 6-5 favourite in the weekly featured pace. So this time around, driver Dexter Dunn decided to try it another way.

In Saturday night’s (Dec. 11) marquee-topping $42,000 Preferred for pacers at The Meadowlands, on an evening when rain was being blown sideways by harsh winds, Let It Ride N picked up a live tow after the half before storming home to get past leader Backstreet Shadow to record a 1-1/2-length win in 1:51.

“The wind was strong,” said Dunn. “But it wasn’t really a big factor, just really around the first turn.”

Sent to the gate as the 7-5 public choice, Let It Ride N took back to last in the talent-laden six-horse field as My Pal Joe hit the quarter in :27.1. Backstreet Shadow, the lifetime million-dollar earner making his first start since finishing a close-up third in the Dan Patch in mid-August, went around the leader to take the top at the half in :55.3.

Covered Bridge, sitting a five-hole trip, turned out to have a huge effect on the outcome, as Joe Bongiorno moved the Ron Burke student to the outside just after the half to provide a live tow for Let It Ride N, who continued to gain as his cover-provider challenged the leader at three-quarters in 1:23.3.

Through the lane, Covered Bridge kept digging, and that helped Dunn wait before tipping Let It Ride N in mid-stretch before going on to what was an easy score, his 27th from 72 career starts. Covered Bridge outkicked Backstreet Shadow, another Burke trainee, for second.

“He was pretty wound up last week,” said Dunn of Let It Ride N, who is trained by Nifty Norman. “He’s always been good off a helmet. We got a good trip and he sprinted off through the stretch. He finished the race off much better this week. Last week, he was pretty tired.”

Let It Ride N, an eight-year-old gelded son of Rock N Roll Heaven-Love A Gamble, returned $4.80 to his backers as he lifted his lifetime earnings to $459,392 for owners William Hartt and Enzed Racing Stable.

COOL HAND LUKE: Only one driver put up three winners on the card, and that was 21-year-old Luke Hanners, whose fans left with loads of green in their pockets.

A LITTLE MORE: Alexandra Goldin recorded a training double on the card.

There were no winning tickets sold in the 20-cent Pick-6, creating a carryover of $7,654 for when racing returns. All-source handle totaled $2,809,737, bringing the cumulative Friday-Saturday action to just over $5.4 million.