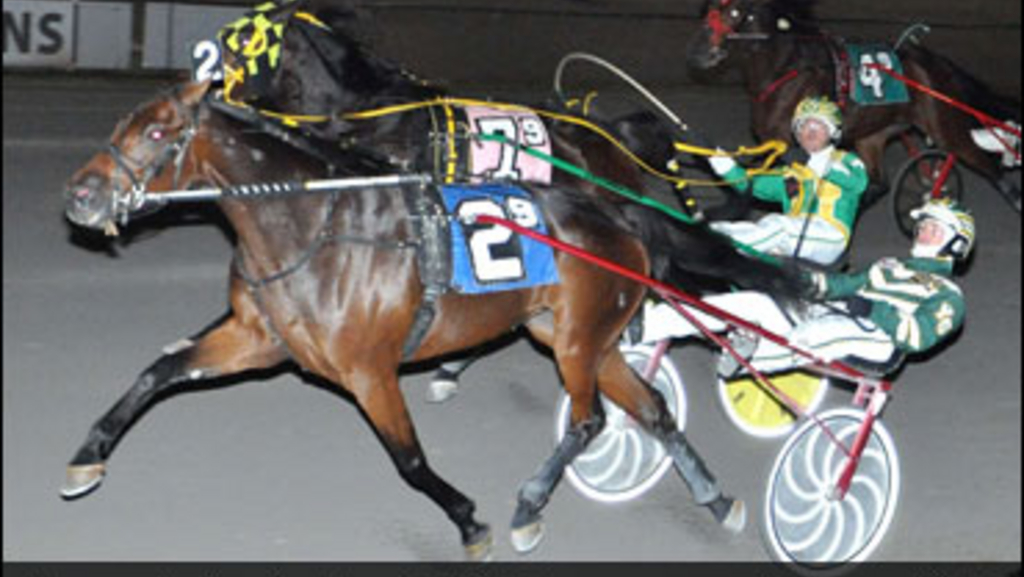 Making her first start from the Burke barn, Maven was victorious in 1:52 flat as she held off Classic Martine to her outside and Bee A Magician to her inside in the Muscle Hill Trot.

Gingras moved Maven into the lead ahead of Bee A Magician after a contested :26.4 opening panel and reached the half in :55.4 and then three-quarters in 1:24.2 with Classic Martine advancing from sixth to apply first over pressure. Down the stretch, she held off her rivals to win by half a length. Charmed Life finished two and a half lengths behind in fourth and Handover Belle was fifth.

Maven lowered Leahs Ex's trotting mares record for five-year-olds and up, which stood at 1:53.1, and equalled the stakes record set by Dorsay as a four-year-old last year.

"She won a lot of races before I got her. She's just a super horse. She's a perfect gaited horse, perfect mannered horse. I've just got to manage not to screw her up," said Burke, noting that he made a shoeing change and introduced the five-year-old millionaire daughter of Glidemaster to his tough training routine.

Burke said that future plans for Maven, who is listed in this week's Harrisburg Sale, are up to her owner William Joseph Donovan. "I'm hoping he keeps her and we go to the Breeders Crown," he said.

A runner-up in the last two editions of the Artiscape, Rocklamation finally had her shining moment in this year's $178,000 event for distaff pacers, held at Vernon.

After getting away mid-pack early on, Rocklamation followed Shelliscape's cover down the backstretch and rallied home to win going away by three lengths in 1:50.2. She defeated Somwherovrarainbow, who had overtaken early leader Krispy Apple after a :27-second opening quarter and clocked middle splits of :54.3 and 1:21.4. Shelliscape finished third. Anndrovette and Summertime Lea earned the final paycheques in fourth and fifth, respectively.

"The trip worked out," said Gingras from the winner's circle. "They set up some big fractions up front and I got a nice second over trip. She's such a good horse. She's not the soundest thing there is, but you know she's going to go on the track and give you 150 per cent each time. She's a pleasure."

Rocklamation was the runner-up to entrymate Camille (seventh tonight) last year and Dreamfair Eternal in 2012 when raced at Tioga Downs.

Burke trains the six-year-old daughter of Rocknroll Hanover, who won back-to-back stakes at The Meadowlands meet this summer in the Golden Girls and Lady Liberty. The double millionairess is owned by J And T Silva Stables LLC, Stable 45, and Our Horse Cents Stables.

When asked about the pecking order in the competitive distaff division, Gingras said, "It's probably going to come down to the Breeders Crown, right? That's what they say. There's two or three mares that could win the divisional honours. She's certainly one of them. Anndrovette, she's tough and she's always there. It's a great group of mares and it's good for the fans."

Gingras also drove French Laundry to a 1:54.4 victory in the $240,500 Kindergarten Classic for two-year-old trotting colts, sending him from third to first at the half-mile mark. Boots N Chains finished nearly two lengths behind in second and Airman Batten was third.

"I wasn't sure how he would be off for almost a month, but it seemed like the right move to make," said Gingras of his racing strategy. "I was in the three-hole and I was going to be first up or make the move to the front and the horse responded. He had plenty of trot left."

Lady Clarabella and driver David Miller edged out the Takter-trained Sarcy and Gingras in the $251,100 filly final of the Kindergarten Classic in 1:55.3 with Allerage Star finishing third. Randy Beeckman conditions the daughter of Lear Jetta for breeder Paul Kinnear and co-owner Dreamland Farms.

Saturday's card concluded Vernon's season and meet leading driver Chris Lems and trainer David Dewhurst were honoured in the winner's circle, along with A Penny Earned, who was named Vernon Downs' Horse of the Year.